Help! My Dog Ate Fish Food, What Should I Do? 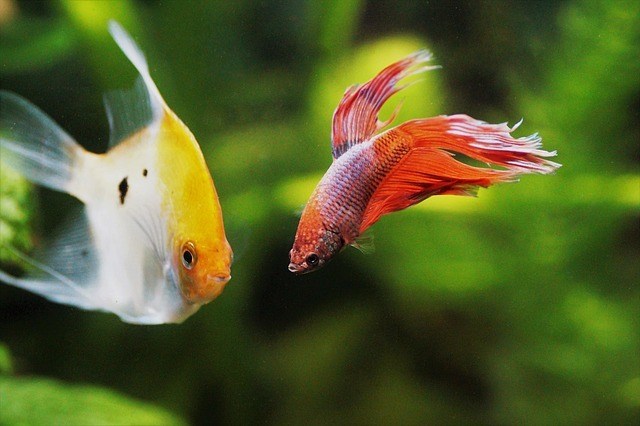 Dogs are nosey creatures with a seemingly insatiable appetite. As a pet owner of an aquarium and a dog, the chance of your fur-pal getting into fish food is real.

This article answers many of your questions about the safety of fish food for dogs.

You might be alarmed at the sight of dog teeth marks on the packaging of food for aquarium fish meaning your dog has been up to mischief. But, should this warrant a rush to the emergency room and a vet bill? Well, not so fast.

If your dog has eaten fish food and he is acting abnormally or suffering allergy-like symptoms, be sure to consult with your veterinarian.

Is Fish Food Bad for Dogs To Eat? 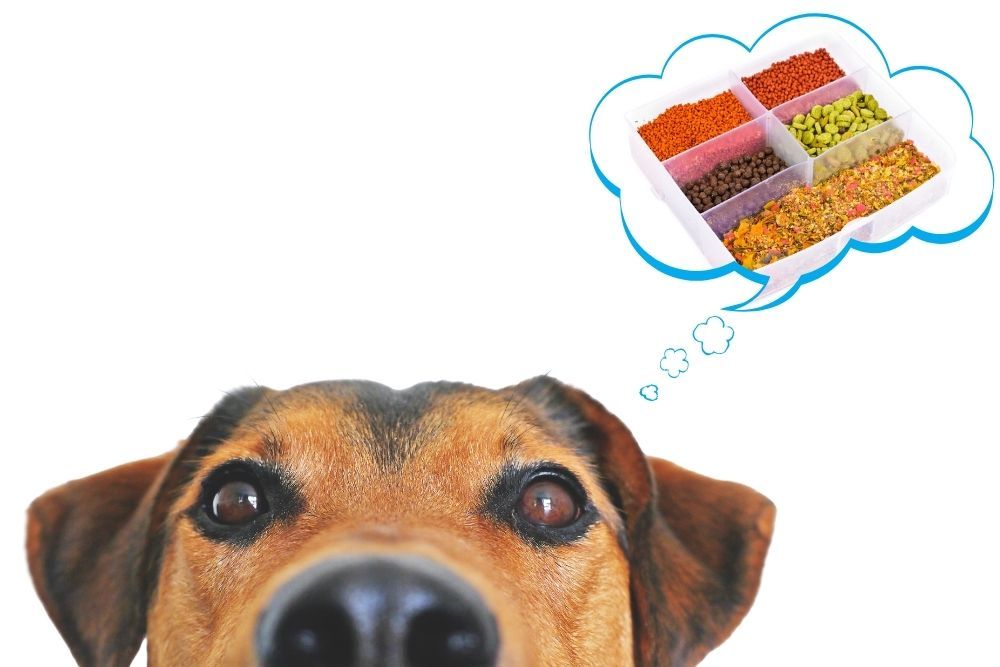 It depends, but not likely. The ingredients in food products for aquarium fish are mostly non-toxic to dogs. But as these foods are not meant specifically for dogs, it is possible for some to exhibit adverse or allergic symptoms after eating them. Any ill effects of fish food in dogs shouldn’t last long.

The digestive system of a dog is much tougher than a human's. A dog's stomach can produce up to 100 times the amount of acid than that of a human stomach. This ensures a rapid breakdown of the protein in fish food and other substances humans can't digest.

Despite this startling digestive capability, a dog's stomach is not above fault. Some human food can be harmful to dogs as can fish food.

There's little chance of aquarium fish food harming your dog, although this depends on the type of fish food and the nature of your dog. Most ingredients in fish food will not harm your dog unless he/she is allergic to one of them.

For example, some dogs are allergic to fish and are likely to be affected by food containing fishmeal.

To properly answer the questions of whether fish food is harmful to dogs, it’s important to examine what fish food is made of, and how individual ingredients in fish food can affect your dog.

My Dog Ate Fish Food, What Shall I Do?

Food for aquarium fish is safe for dogs provided it doesn’t contain any ingredients to which a dog is allergic. Also, a small quantity is usually no big deal. As a caring pet parent, you should know the nutrient sources and content of each fish food you buy.

Fish food consumed by a dog in large quantities can upset your dog's digestive system. As the digestion issue in most cases does not persist, there isn't anything to worry about. Your dog will likely get over it without needing help.

While it's expected that any unusual side effects won't last long, it's important to take note that some dogs are more vulnerable than others. For example, the digestive system of puppies is less capable and highly sensitive to a change of diet.

As a rule of thumb, do not be in a hurry to call the vets after your dog eats fish food. Just observe your dog over the next 10 hours or so for any abnormalities. Meanwhile, research the types, sources, and proportion of nutrients in that fish food.

Looking up ways to deal with the problem yourself might also save you an expensive vet bill.

It’s easy to detect fish food poisoning in dogs as the effect can be rapid and dramatic. If your dog consumes a large amount of the flakes you feed your pet fish with, he might experience mild disorders.

This is as a result of the sudden change in diet causing stomach upset.

Symptoms include nausea, salivation, vomiting, diarrhea, cramping, abdominal pain, dizziness, loss of appetite, loose stool, and fever. The symptoms can appear rapidly, but a dog could also bounce back quick enough too.

If your dog continues to vomit or a symptom persists, then it's time to call the vet. You'll need to know the list of ingredients in the food, or at least have access to its package in case the vets ask for it – which they probably will.

What is Fish Food Made Of? Is it Toxic? 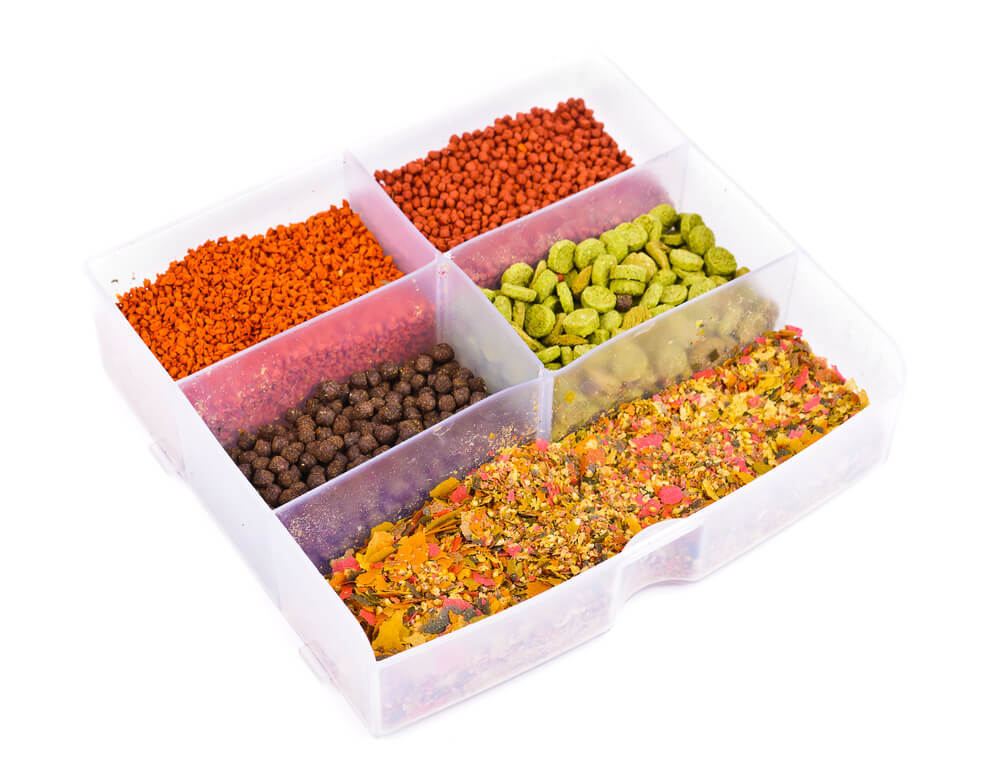 Aquarium fish feed contains several nutrients including protein, carbohydrates, fiber, fats, vitamins, and minerals - in different proportions. But there are two major nutrients that form the core of fish food: protein and fats at 50 and 40% accordingly.

However it isn't so much the nutrient content it has but where it comes from. There are different sources of protein, fat, minerals, vitamins, etc.

The main sources of fish-food nutrients are:

Let's take a look at each in detail and see how these ingredients can affect your pet dog if he has ingested fish food flakes, pellets or bloodworms.

A growing number of fish food brands have dehydrated chlorella as a major ingredient in their product. This ingredient comes from chlorella algae, which is a detoxification agent for dogs. But other sources of algae can be dangerous, like the spirulina.

Did you know that spirulina is bacteria called cyanobacterium? Spirulina is a type of alga found mostly in ponds. It has a bluish-green color and is responsible for the slimy pond water.

While Spirulina is a superfood containing more than 50 percent protein and packed full of B vitamins and essential fatty acids, particularly GLA, it can be harmful to dogs depending on where it's being sourced from.

Organic spirulina is the best.

Your dog ingesting a considerable amount of fish food that contains spirulina sourced from cheap suppliers may result in respiratory failure, liver failure, panting and others illnesses.

Fishmeal is a major ingredient of fish food. It is supposed to come from fish considered non-suitable for human consumption or remnant of fish from seafood factories.

If your dog is constantly scratching, licking, or has a runny nose or runny eyes, you might want to consider the possibility of it being caused by a fish food allergy.

It is still rare to have a dog with a fish allergy, but it is becoming more common by the day. Dogs are more likely to be allergic to beef or poultry. Crustaceans, worms, and insects are beneficial to dogs.

Pet owners typically buy fish food according to the dietary requirements of a particular pet fish. So you’ll find different fish food for the nutritional needs of different fish.

Fish foods are also differentiated by the amount of protein and fats contained therein. Carbohydrate is relatively lower in fish food than dog food since fish, being mostly carnivores, are less capable of digesting carbohydrate.

Is Goldfish Food or Betta Food Harmful to Dogs?

Yeast is used in baking to make the dough rise. When a dog eats goldfish containing brewer’s yeast, watch out for digestive issues as the warmth in your dog’s stomach causes the fish food to expand.

Betta food is very high in protein and fats, and if a dog ingests a large quantity, he may look weary or exhibit other abnormal behaviors.

You can treat betta fish food ingestion by feeding your dog a non-fatty diet with plenty of water. Also, Betta foods contain a high amount of larvae, which can alter the balance of natural bacteria in your dog's intestine and cause health issues in the long run.