Can Dogs Have Edamame Beans? Is It Safe for Them or Not?

As natural omnivores dogs can - and should - enjoy both meat and vegetables as a part of their healthy diet. In recent years edamame beans - which have been a staple of Eastern diets for centuries - have become increasingly popular in the West. Lots of humans are eating them (the why of which we'll discuss later) but can dogs have edamame beans?

The basic answer is yes, your dog can eat edamame beans as long as they don't have a diagnosed soy allergy, are served in small quantities, are cooked and fed occasionally and they may, as you'll see if you keep reading, be very good for them.

There are also a few precautions you should take when offering your dog this crunchy veggie, and we are going to cover those here too.

What Are Edamame Beans? 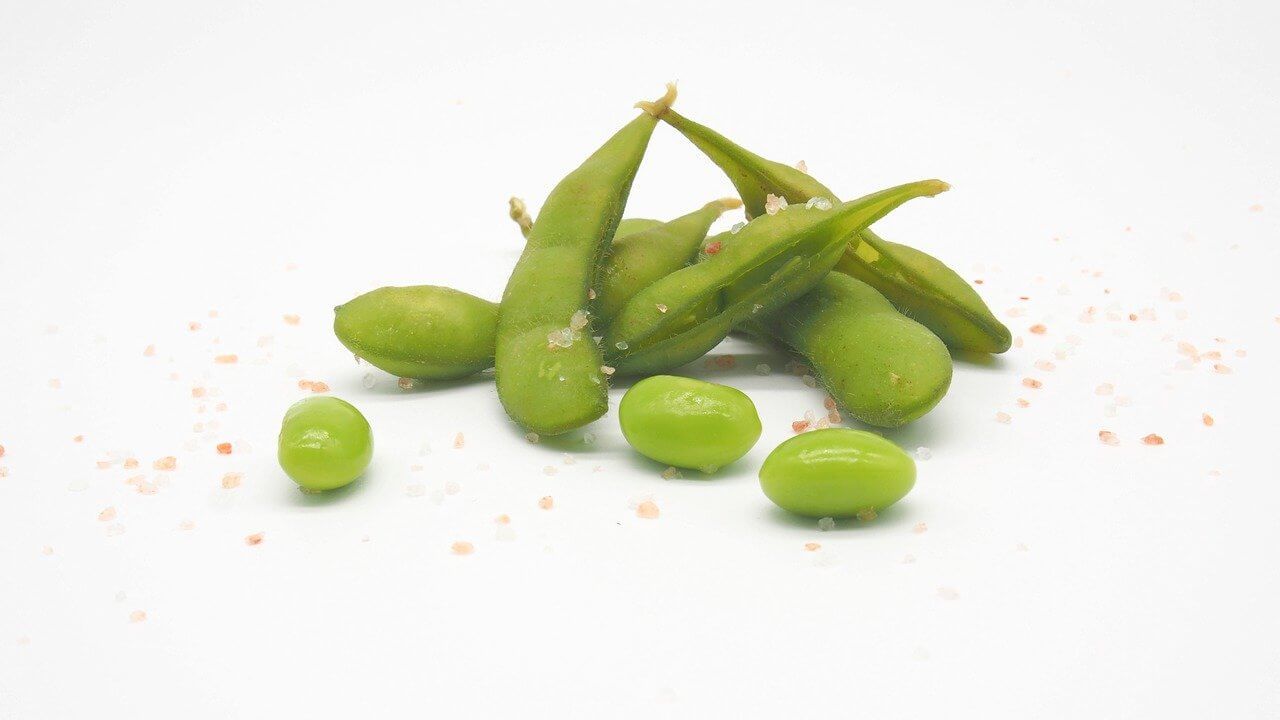 Haven't fallen for the crunchy allure of edamame yet and not sure what these beans are?

Edamame is the Japanese word for young soybeans, and it literally translates to "stem beans," possibly because they were once sold with stems still intact.

These green young beans have a crispy crunch and a slightly sweet taste and, for humans, can be used in everything from salads to casseroles, as well as enjoyed as a standalone snack. Edamame is also a staple in many vegetarian meals.

Edamame is the least processed form of whole soy products.

By the way, in case you aren't sure - many are not - edamame is pronounced ay-duh-MAH-may, putting an emphasis on that third syllable.

Edamame is rich in protein, high in fiber, low in saturated fat, and nutrient dense.

So, Can Dogs Eat Edamame Beans?

As we mentioned right at the start, most dogs can indeed eat edamame beans, and an increasing number of pet parents feel they should, because they do offer a lot of nutritional benefits in a tiny package - unless they have a diagnosed soy allergy.

It's not always easy to convince dogs to eat veggies (much like human toddlers) but the crispy, crunchy edamame bean often appeals to even picky dogs.

The other thing that parents often wonder is if the pod is safe for their dog to eat or whether all the beans should be shelled first.

The answer is that yes, the pod is safe to eat (as long as it's cooked), as in it is not toxic, but its taste is bitter compared to the sweet bean itself, and harder to digest, so some dogs may struggle with it. In addition, the pods can pose a choking hazard for smaller dogs, so should probably not be offered.

Always consult your veterinarian before feeding anything new to your dog.

Is Edamame Safe for Dogs? 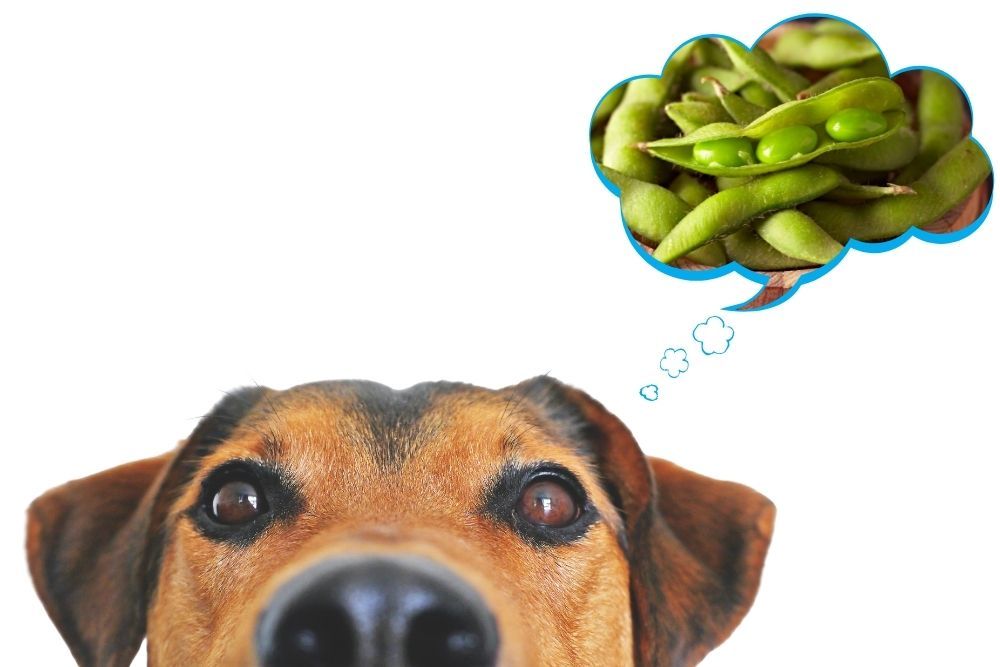 How you prepare it can change that however. Dogs should not be given the prepared edamame snacks sold in stores as they usually contain added salt, flavorings and sugar which can lead to stomach upset and weight gain.

Most humans enjoy edamame with sauces like soy sauce, but that should not be given to dogs either, for the same reasons.

Raw soybeans, including the immature green form, are toxic to dogs and thus you should avoid feeding your dog raw edamame beans.

You'll also need to remember that edamame is soy, a foodstuff that some dogs are allergic to. Like humans what those allergies manifest as will vary from dog to dog, and can range from skin irritation to vomiting and diarrhea.

When fed in excess to dogs, soy products - including edamame - can also lead to more serious health consequences like reproductive harm and even liver damage.

That's why feeding your dog edamame as an occasional healthy snack, not making use of it as a regular part of their everyday diet is what most vets and canine health specialists recommend.

And if your dog has never had soy before and you are unsure whether they might be allergic to it, start very small - just a few beans - to gauge their reaction.

Also, if you do notice any type of reaction, contact your veterinarian right away to determine if your pet is having an allergic reaction.

Benefits of Edamame for Dogs

Humans consume edamame for both its taste and its nutritional benefits, and some of those benefits can be helpful for dogs too.

If your pet is allergic to some (or all) animal proteins edamame beans might be an appropriate choice.

The table below shows some of the key vitamins and minerals found in 1 ounce (28g) of edamame.

Side Effects of Edamame for Dogs

In many ways, the professional jury is still out on the benefits of feeding dogs edamame as while the beans themselves are rarely harmful to dogs when fed in excess they can become a problem.

As is the case for almost any type of beans - edamame is a bean - an excessive amount of them can cause gastric gas, leading to bloating.

As a human you might know what this feels like, and it's very likely your dog will feel the same (and the effects on the air around him might not be very pleasant either).

In dogs with sensitive stomachs too many beans - including too many edamame beans can lead to vomiting and diarrhea, neither of which is pleasant for your dog or for you.

Feeding your dog too much of edamame beans may not be the healthiest choice.

Excessive consumption of edamame beans may lead to too much estrogen and a hormone imbalance causing additional health complications including cancers or thyroid issues.

In some dogs, the largish amounts of calcium contained in edamame beans can become a problem if they are given too many of them.

Dogs need calcium for sure, it's essential to their health in fact as it plays a role in all kinds of bodily processes. Too much calcium in their blood however can tip them into a condition called hypercalcemia (which literally means too much calcium). The result can be kidney stones, or even kidney or liver damage.

How to Feed Edamame Beans to Dogs

Yes, there is a right way to feed your dog edamame, as we've already touched upon. The most important thing is that it should not be given in excess.

If it turns out your dog likes the taste and the crunch then offering them a handful of pre-cooked and thus ready to eat edamame or steamed, shelled edamame occasionally won't do them any harm and may offer them some of those extra health benefits we mentioned earlier.

Edamame should not be a daily part of their diet though and it should not be served as you might eat it yourself, all 'dressed up' with salt, butter, soy sauce or other spices and garnishes.

One of the easiest ways to feed a dog edamame is to do so plain (cooked, no flavorings) as an occasional replacement for their usual training or behavioral treat. Alternatively you could add a handful of steamed edamame to their kibble at dinner time a few times a week.

Again, never give them the processed edamame snacks from the supermarket, as they really do contain more additives than your dog's needs.

The edamame 'craze' in humans does have some pet parents feeling that if they do not give their dog lots of these healthy veggies they are failing to offer them the healthiest diet possible. What that thinking does not take into account though is that dogs and humans have different nutritional needs.

They do not need the same amounts of vitamins and minerals as humans - although they need them - and while a big daily edamame may be great for your health it could potentially be harmful for your dog.

In the end, cooked edamame is fine for most dogs to eat, in small, occasional doses, if they seem to like it. If you are concerned about their nutrition (and you should keep a careful eye on that of course) make sure that you are feeding them a high quality dog food. Most of these contain a balance of meats, veggies and other ingredients that have been carefully balanced to meet a dog's nutritional needs and help ensure they get everything they need to remain healthy on a daily basis.

If your dog has eaten a large amount of edamame and he is acting abnormally, in distress or suffering allergy-like symptoms, be sure to call your vet, emergency clinic, or animal poison control center right away.