Can Dogs Have Eggplant Or Is This A Bad Idea? 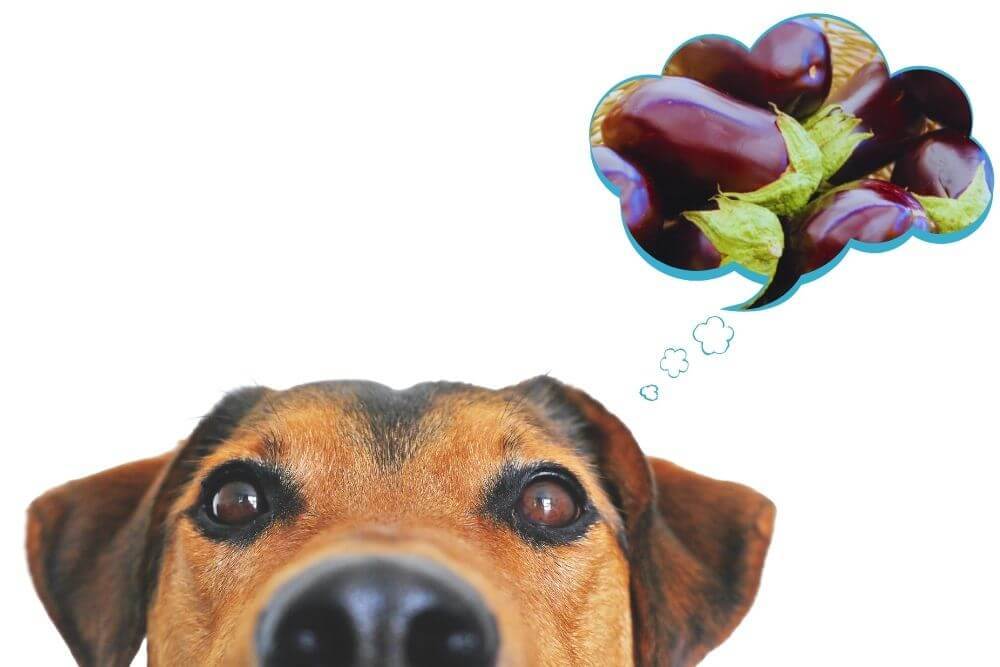 Dog lovers always want to give their pets the healthiest diet that they can. There are some fruits and vegetables that can be beneficial to your pup, and some that you should stay away from. One question that dog owners ask is whether their dog can eat eggplant.

The short answer is yes, eggplant is safe for most dogs in moderation and if your dog is healthy and has no pre-existing conditions. It has beneficial vitamins and minerals for your pooch.

There are some instances where a dog should not be given eggplant. We'll go over the benefits and when to avoid feeding eggplant to your dog.

If your dog has eaten eggplant and he is acting abnormally or suffering allergy-like symptoms, be sure to consult with your veterinarian. 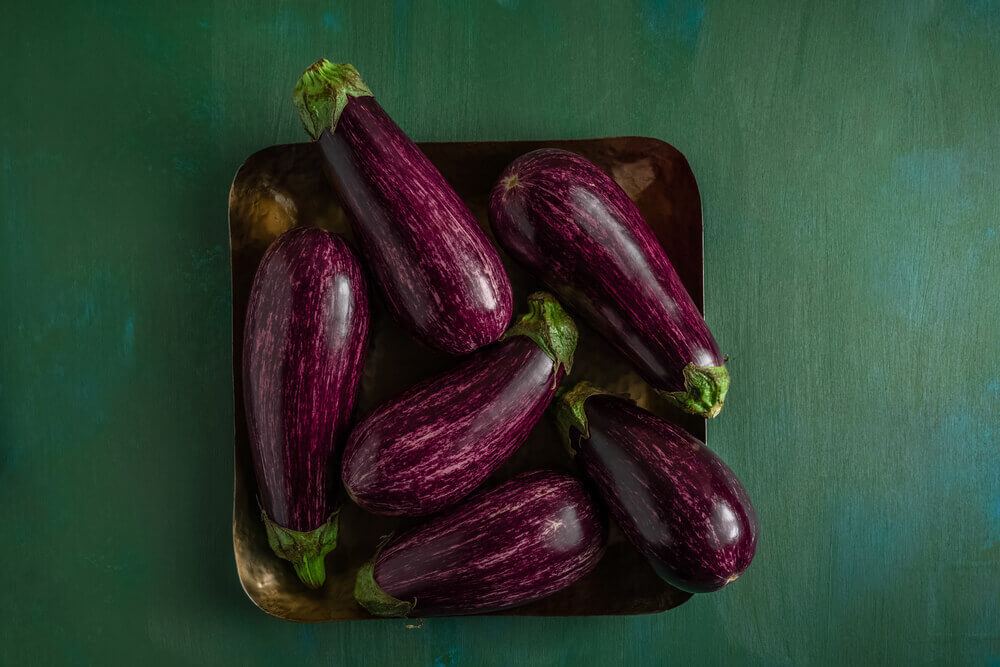 Eggplant is classed as a fruit, more specifically a berry. It falls under the Solanaceae nightshade family of plants. Its botanical name is Solanum Melongena. It's a fruit that has been grown all around the globe. It is normally purple in color and the fruit itself has a spongy consistency. Although eggplant is considered to be a fruit, it is more commonly used as a vegetable.

While eggplant is grown year-round, its peak growing season is between July and October. The exact country of origin is not clear, however, experts believe it started out in the regions of India. It got its name due to the original fruit brought to North America being white in appearance, like a large egg.

Eggplant goes by other names:

While uncooked eggplant is not poisonous for dogs, the slightly bitter taste may not be something that they enjoy. For this reason, the eggplant should be grilled, boiled, baked, or roasted without seasoning.

Eggplant is part of the nightshade family, just like tomatoes, and isn't a good option for dogs who have allergies to this species of fruit and vegetable. For dogs with sensitive digestive tracts, it can cause them to have an upset stomach. It can also make an existing condition flare up, such as arthritis and kidney issues, so is best avoided by dogs with these ailments.

Some of the most common telltale signs of an allergic reaction to eggplant include:

If your pup shows any signs of an allergic reaction, you should call your veterinarian.

Is Eggplant Good for Dogs?

For dogs who can consume eggplant, there are some benefits. Eggplant is rich in Vitamin K, Vitamin B6, folate, potassium, phytonutrients, and niacin, all of which work to boost your dog's immune system. Eggplant is also high in fiber and low in calories, which means they give your dog a feeling of fullness and can be beneficial for dogs who need to lose a bit of weight.

The safest, and most healthy form of eggplant for your pup is serving it plain. Regardless of how you prepare it, you should refrain from cooking eggplant in butter or oil, and not season it with salt. Some seasonings that are safe for humans can be toxic for dogs.

Wondering what's in an eggplant? Here's a look at the breakdown of the nutritional benefits eggplant has to offer, as per the USDA 1 serving or 1 cup of eggplant:

Is Eggplant Safe for Dogs?

As part of the Nightshade family, eggplant contains Solanine, which is a natural alkaloid and is known for exacerbating inflammation. If your dog has arthritis or other inflammatory issues, it can be harmful. The most solanine-concentrated part of eggplant is the leaves and should be kept away from pets with inflammation, digestive issues, and kidney problems.

Eggplant also contains Oxalates, which are known for blocking the body's ability to properly absorb calcium into the bloodstream. This can cause bladder and kidney stones if eggplant is eaten in large quantities. However, given in smaller amounts, it is safe for healthy dogs.

What Benefits Can Your Dog Derive From Eating Eggplant

Eggplant is high in fiber and can help your dog if it has digestion issues, such as constipation. Fiber also gives your dog's tummy a feeling of fullness, which can be beneficial if you need to restrict their calorie intake to help them lose weight. A balanced diet of fiber can improve your pup's gastrointestinal health and is a healthier treat than store-bought dog treats, which can often lead to your dog packing on their weight.

A Good Source of Vitamin B6

Vitamin B6 is a vital component for your dog. It is what generates glucose and red blood cells. It is also used to keep the nervous system working properly, regulated hormones, and help the immune system.

Eggplant provides your dog with Phytonutrients and Manganese, both of which help boost the immune system and can protect your pup from things like heart disease, some cancers, and fights infection. It also works to protect vital organs and phytonutrients have been linked to better brain function.

Having fiber in your dog's diet can help make their heart stronger because it helps to lower your dog's cholesterol intake. This makes it easier for the body to expel cholesterol more efficiently so that it isn't building up in your pup's system.

A Source of Vitamins and Minerals

Eggplant is packed full of important vitamins and minerals that assist with many of the body's essential systems.

That lovely purple hue that eggplants are known for is more than just a pretty color. Eggplant gets its color from naturally occurring plant compounds, which have been linked to a reduction in osteoporosis and an increase in bone density. Eggplant also has calcium and iron, which also works to improve the health of your dog's bones.

How Much Eggplant Should You Feed Your Dog? 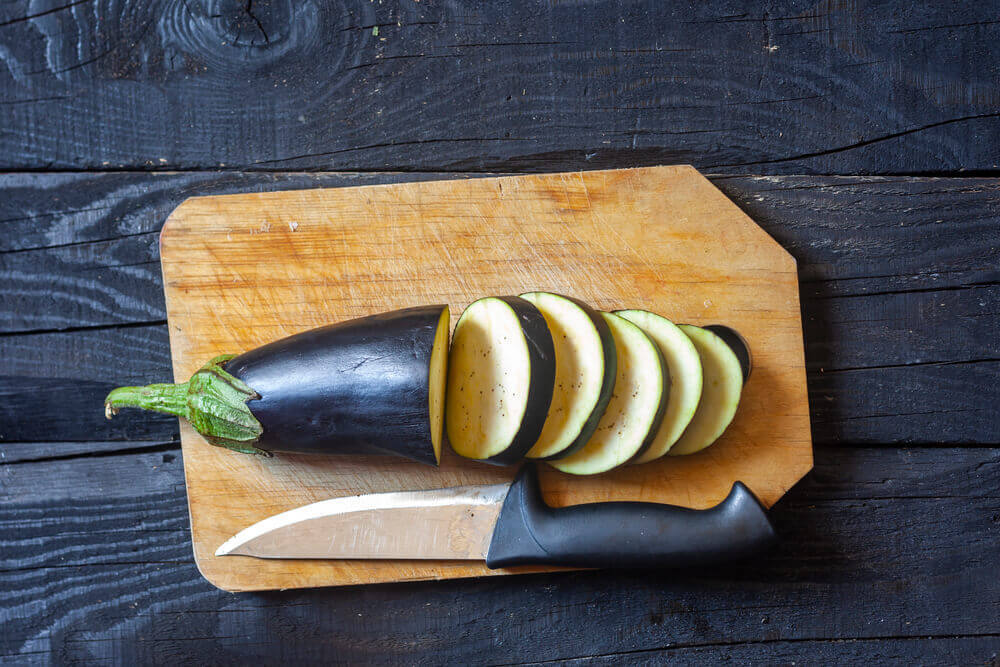 As mentioned earlier, raw eggplant can have a slightly bitter taste to it that puts your furry friend off. So cooking is the best way to coax them to eat it. If your dog is healthy, you can serve them a cup of eggplant per day.

Keep in mind that large amounts can cause digestive issues and dogs with any inflammatory issues, kidney issues, and allergies to the nightshade family of plants should avoid consuming eggplant.

Eggplant can be prepared in a variety of ways, including roasted, grilled, steamed, boiled, and baked. It really depends on your pooch's preference. However, the eggplant should be prepared plain without seasoning or the use of oils and butter.

We know how much our furry friends love jerky treats. Well, you can make jerky from eggplant and you won't need a food dehydrator to do so.

Your first step is cutting up the eggplant into thin strips, around ¼ of an inch thick. Slicing it too thickly means it will take longer to dehydrate and too thin will make it cook unevenly. Take your cut strips and place them on a baking tray.

Set your oven to 175 degrees (F) and let the eggplant bake for about two to three hours. It should be fairly pliable in the middle with some crispy edges.

Set your dehydrator to 135 degrees (F) and let the eggplant cook for around three to four hours. You can leave it for up to 5 hours if your dog likes jerky that is a bit crispier.

Some people will season their eggplant jerky for their dogs. You need to take care of what seasoning you use and how much. Plain is safest, but if you must use oil, use basic olive oil (no added flavoring).

You may use a small amount of salt and pepper but, again, unseasoned is safest. There are some dog-friendly spices that you may use in moderation; rosemary, turmeric, and cinnamon. Turmeric has anti-inflammatory properties that have been known to relieve arthritis for some.

Vegetables That Your Dog Should Avoid

Vegetables are healthy for humans, but there are some that should be avoided for your dog because they can be toxic:

If you have more questions about whether or not your pupper should eat aubergines or any other human vegetable, contact your veterinarian.