Can Dogs Have Greek Yogurt? 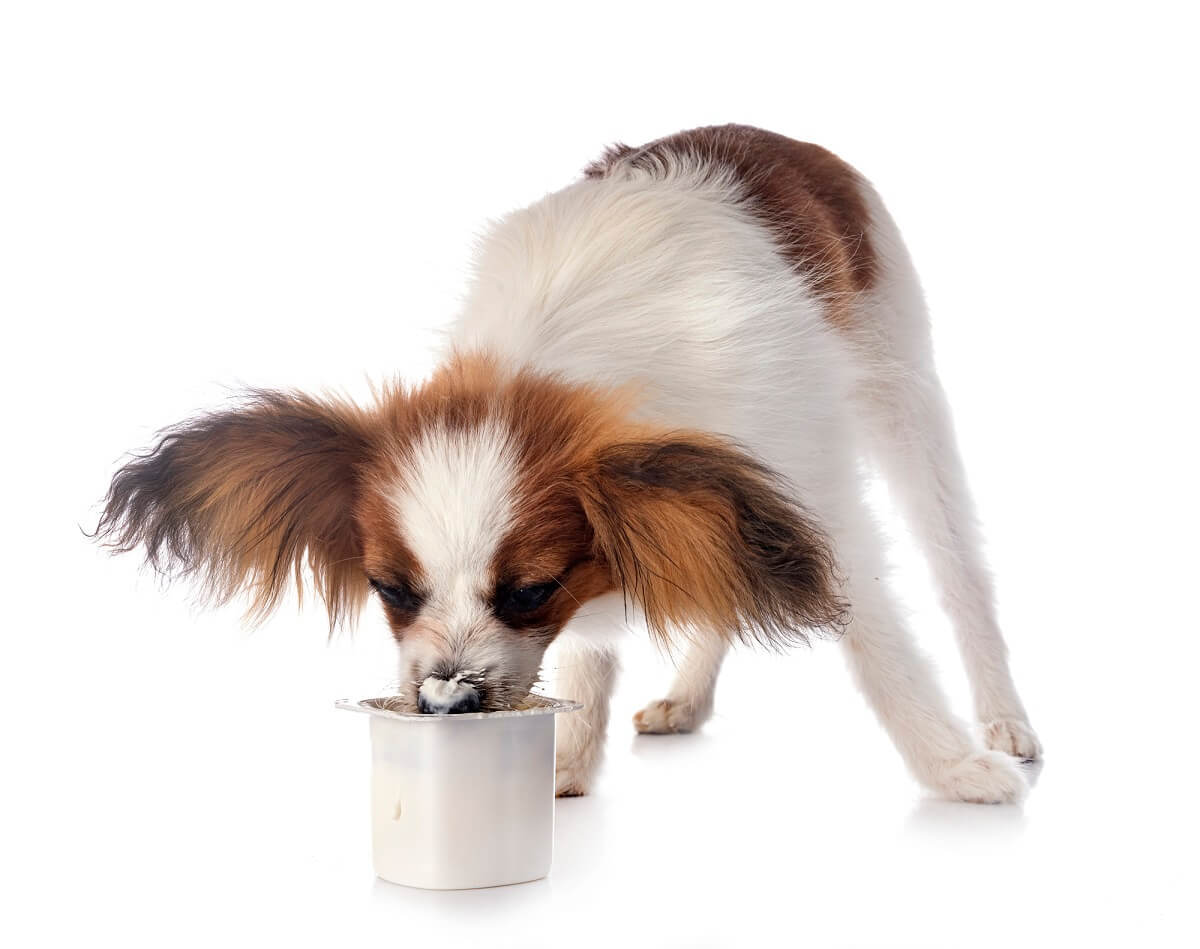 Most of us know that there are lots of good reasons for humans to eat yogurt to help satisfy their sweet tooth. If you shop carefully, you'll find yogurt that's reasonably low in fat and calories, is packed full of protein and even contains helpful live cultures called probiotics that are said to significantly improve gut health.

So opting for yogurt, including Greek yogurt, over many other sweet treats is a smart move for us. But how about our dogs? Can dogs eat Greek yogurt? And if they do, will eating it offer them health benefits too? These and the answers to other related questions are what we are going to cover here.

For most dogs, there is no harm in their having a little bit of plain Greek yogurt occasionally. If yours is a pup who hankers after sweet treats when the rest of their family is eating them, then it is certainly preferable over cakes etc. And we all know (or should know) that dogs and chocolate are a dangerous mix.

Greek yogurt has less lactose, so dogs that are lactose intolerant, may be able to enjoy small amounts since it it is easier to digest than standard yogurts.

How much Greek yogurt a dog can eat is something we will go into in greater depth in a moment, but the very basic answer is a moderate amount.

While lowish in calories in some forms, Greek yogurt is still fairly calorific and even plain Greek yogurt has a significant sugar content, and no dog needs empty sugar and fat calories, especially those prone to gaining weight easily.

The average dairy case at the grocery store these days is packed full of an ever-increasing variety of yogurt options.

It can all get very confusing quickly.

For example, what makes yogurt Greek yogurt? And what's actually different about it? Greek yogurt is created by straining normal yogurt to remove the whey and other liquids.

Greek yogurt requires far more milk than standard yogurt to create a batch of the same proportions, since the filtering procedure reduces the total volume.

Traditionally, yogurt was strained several times in cloth bags until the proper texture was achieved. Centrifuges are used in modern industrial procedures to produce the same effect.

Some firms utilize stiffening agents or other ingredients to make fortified or Greek-style yogurt, in which case the end product is called just that to indicate that it is not quite the same.

Greek yogurt is thicker and a little tangier than conventional yogurt, since most of the liquid has been removed. It's also more expensive because it calls for more milk.

In addition, the process of creating Greek yogurt versus 'normal' yogurt alters the nutritional profile. The table below compares basic plain yogurt to plain Greek yogurt for a standard eight ounce serving.

As you can see, when yogurt is made Greek style the fat, sugar, carbs and sodium levels are decreased, which is, generally speaking for humans, a good thing and is almost certainly great for dogs too. The protein content of Greek yogurt is higher too, another plus.

What may not be so great is that the calcium content of Greek yogurt is lower than that of standard yogurt, by just over 10%. This is a nutritional tradeoff you will need to weigh up for yourself based on the rest of your diet, as both are essential for bodily health.

Before we discuss the possible health benefits of Greek yogurt for dogs, it's important to discuss yogurt types. The fact is that a lot of the Greek yogurts that people like to eat, because they taste much better, are not plain yogurts.

Whether you choose to eat artificially flavored Greek yogurt, or the kind with fruit on the bottom, or granola on the top is up to you. However, as these usually contain all kinds of extra sugars, sometimes artificial colors and flavorings and even dangerous to dogs ingredients like grapes and chocolate chips, you should only give your dog plain Greek yogurt.

Then there's the matter of artificial sweeteners. These can be extremely hazardous. Sugarless gums, some nut butters, and certain 'low-calorie' Greek yogurts, for example, contain xylitol. Even a small amount might cause liver failure or convulsions in dogs.

If the ingredient xylitol is listed on the label, don't offer it to your dog.

It's also critical to note that the vast majority of accepted scientific dietary research on the benefits of Greek yogurt has only been conducted on humans.

It's assumed that some benefits do translate to pups, but as dogs and humans have very different bodily systems these assumptions are just that, and if your dog shows any adverse reactions to consuming Greek yogurt you should not give her any more and consider consulting your vet if the reaction is a significant one. 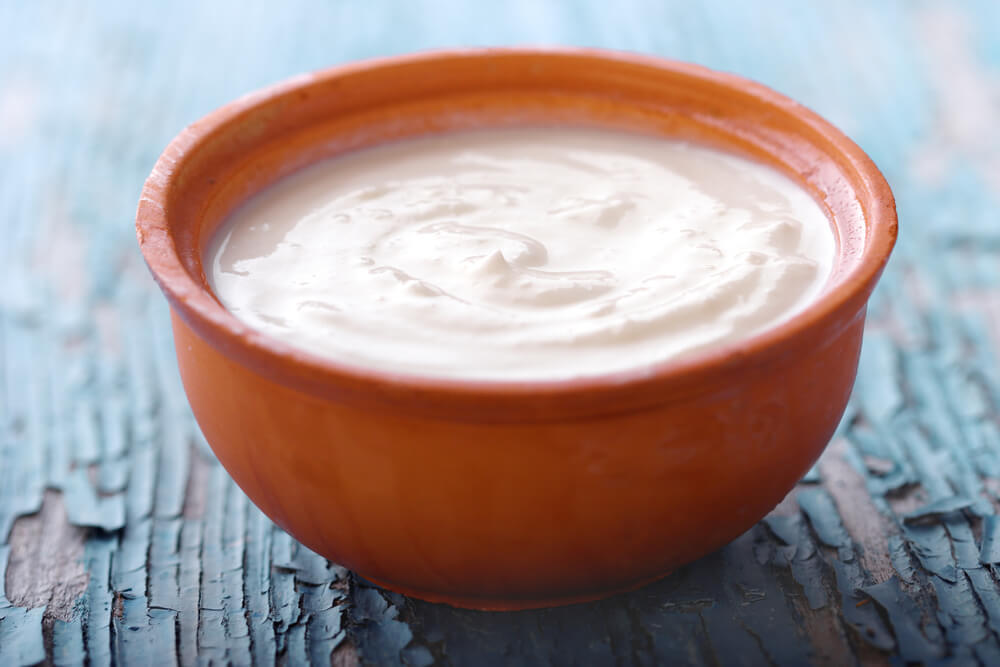 With all of this having been said, Greek yogurt, of the plain variety and in moderation can be nutritious for your pooch and even help alleviate digestive issues along with other following health benefits.

There has been a lot of talk about probiotics and gut health in humans over the last decade or so, and Greek yogurt has often been touted as an excellent source of these.

Probiotics are live bacteria that are found naturally in your body. Bacteria is commonly thought of as a pathogen that makes people sick. You do, however, have two types of bacteria in and on your body at all times: healthy bacteria and harmful bacteria. Probiotics are beneficial bacteria that assist in keeping your body functioning properly. And this is especially true in terms of your digestive system.

In humans, extra probiotics from sources like Greek yogurt seems to help with digestive health problems like diarrhea, constipation and even, for some people, the more unpleasant symptoms of IBS. And it may do the same for dogs.

Many pet parents do indeed state that a little Greek yogurt seems to settle their dog's upset tummy, and even occasionally helps a dog prone to gas become less pungent.

However, given that some dogs are lactose intolerant, it can also have the opposite effect!

Humans need plenty of protein to stay healthy, and so do dogs. The protein found in plain Greek yogurt is a natural source of this essential nutritional building block, and so the added protein may be beneficial for your dog.

However, many vets and canine nutritional experts feel that there are better sources of protein for dogs and that pet parents should focus on finding a high quality dog food that meets their protein intake needs, rather than relying on calorific yogurt to help meet it.

How Much Greek Yogurt Should I Give My Dog?

Dogs really do not need to be fed Greek yogurt on a daily basis. However, if you are trying to improve his digestive health with probiotics, as long as they are not lactose intolerant a tablespoon a day (roughly 5-10% of your dog's daily caloric intake) will likely do very little harm and may indeed be beneficial for them.

Many dogs will eat offered Greek yogurt right off the spoon, but you could also consider freezing the yogurt in ice cube trays, something that will allow you to create perfectly proportioned treats that you can offer your dog when you have your own yogurt treat.

Other clever ways of feeding yogurt to your pooch is: using it to make DIY doggie ice cream, as a topper on top of his dry food, an ingredient in homemade pupcakes, use it to fill a KONG or spread it on a dog lickmat to engage your dog.

What Brand (& Type) of Yogurt Is Good for Dogs?

Dogs, as we mentioned earlier, should only be given plain Greek yogurt, which eliminates many of the brightly colored offerings you'll see on grocery store shelves, and you might consider for yourself.

They should also, as previously noted, be given low calorie or 'diet' plain Greek yogurt that might contain Xylitol or other artificial sweeteners.

Which brand you choose is likely to be a matter of budget and availability. There are lots of popular brands lining the shelves, but when it comes to plain Greek yogurt it's pretty much all the same stuff, so opting for the lower priced, generic store brand for your pup is fine.

Here's our top picks for the best yogurts (and treats) for dogs:

Puppies have very sensitive tummies, and most vets prefer that they stick to their everyday high quality puppy dog food, and be given treats of any kind in serious moderation to avoid stomach upsets.

Yes, puppies do need lots of protein as they grow, but they should get it from their dog food, rather than from things like Greek yogurt.

If your puppy really seems to want to try your yogurt - and it's hard to say no to those big puppy eyes - the occasional teaspoon of plain Greek yogurt is probably OK, but watch for any reactions, especially when it comes to their digestive system.

What Can I Mix With Greek Yogurt For Dogs?

You are probably not thrilled by the taste of plain Greek yogurt, and likely prefer to mix something into it to improve the taste. The fact is, your dog really does not care. If he likes Greek yogurt - and not all dogs do - they will eat it as is.

You could consider mixing in a little peanut butter if that's something your pup likes, but do keep an eye on what that will do for the calorie and sugar counts. Being overweight can be very dangerous to any dog's health, and may significantly shorten their lifespan, which will obviously negate any health benefits that either ingredient might offer.

What you could do if you want to offer your dog Greek yogurt on the occasional basis that most vets say is OK, is use Greek yogurt as an ingredient when making homemade dog treats. Dogs do need treats once in a while, even if you are watching their diet very carefully.

The simplest way to do this is to freeze the Greek yogurt, as we suggested earlier. Most freezers will create a hard enough to handle 'yogurt cube' in just a few hours, and you could even add a few to a plastic bag in your cooler when heading out on a picnic or other outdoor adventure with your pup.

If you want to try your hand at baking your own dog treats, or already do, there are lots of great recipes out there. This one, however, is a particular favorite of our pups, as it includes both plain Greek yogurt and cheddar cheese, as well as rolled oats which, in themselves, offer pups some nutritional health benefits.

Do you feed your dog Greek yogurt? Do you have any tried and true yogurt recipes for dogs? Share ‘em in the comments!