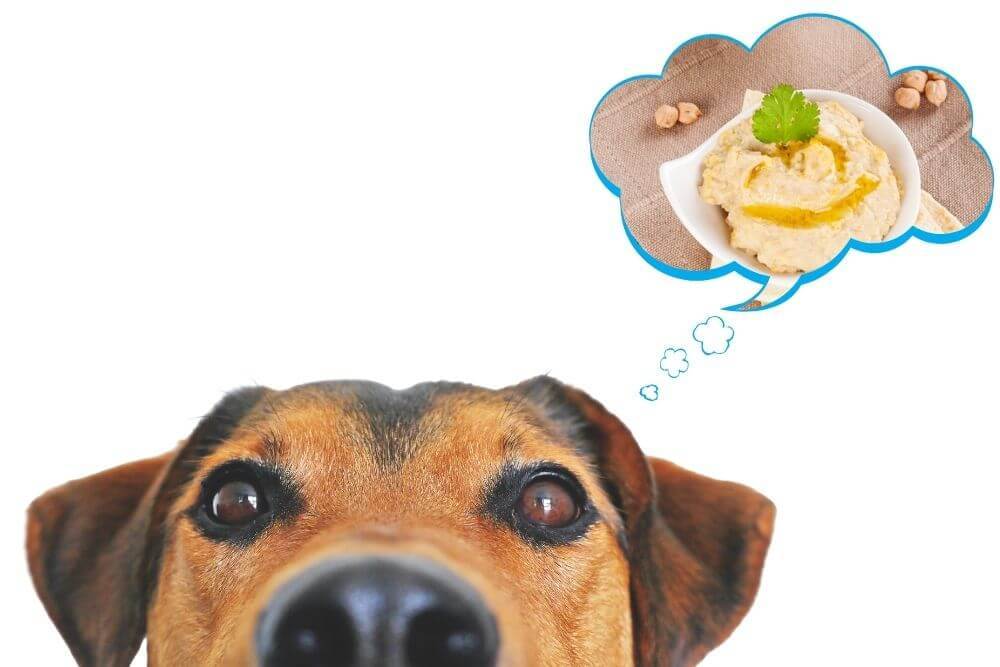 Long a staple of the Middle Eastern diet, hummus has become a favorite of health-conscious Western eaters looking for a delicious alternative to calorie heavy spreads and dips. But as apparently healthy as it is for their humans, can dogs eat hummus?

The simple answer is no, not in the form that you might pick it up in the grocery store. Store bought hummus is not something you should feed to your dog (we'll be explaining why in a moment) but it's primary ingredient - chickpeas - is a foodstuff you can consider adding to your dog's diet, as they are packed full of protein and nutrients that can be very good for him.

If your dog has eaten hummus and he is acting abnormally or suffering allergy-like symptoms, be sure to consult with your veterinarian. 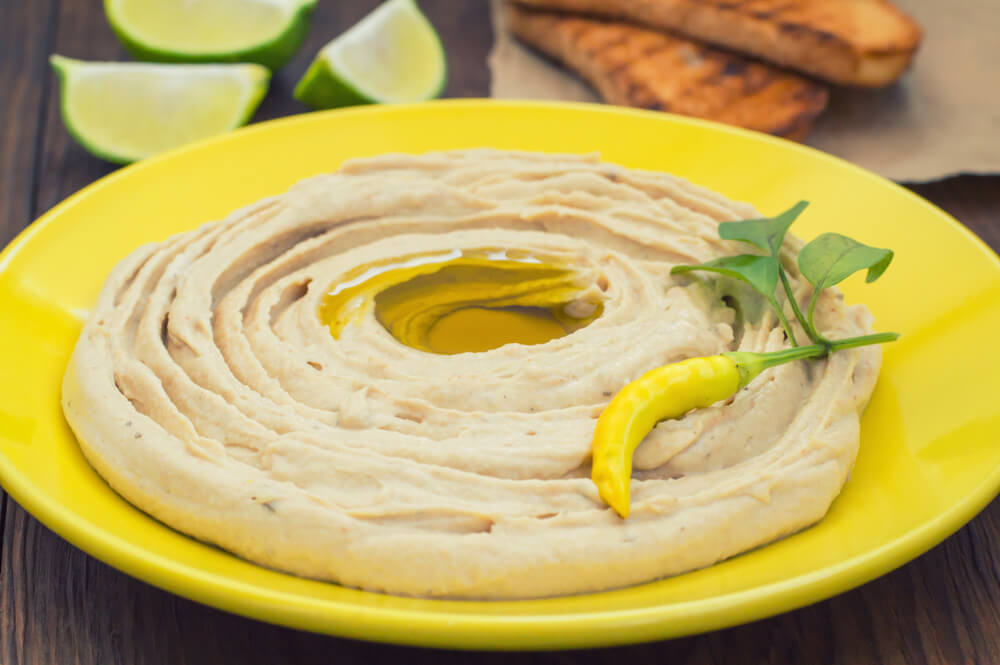 Hummus, as mentioned earlier, has been a staple of Middle Eastern diets for centuries. It's used as a spread and a dip and is often accompanied by crackers, breads, vegetables and even fruits. In the Western circles where it's now become very popular, hummus is replacing, for some people, cheese dips, salsas and even peanut butter as a snacking staple.

The primary ingredient in hummus is the garbanzo bean, more commonly known as the chickpea in the US. It also typically contains tahini seed, lemon juice, garlic and olive oil. These are combined and beaten - or in modern times blended - into a smooth, but thick, paste.

Assembling a standard nutritional profile for hummus as it's sold in the West isn't easy, as increasingly all kinds of other ingredients are added to the centuries old basic recipe.

According to the United States Department of Agriculture, a typical 100-gram (g) serving of hummus will usually contain:

The traditional humus recipe also provides some essential vitamins and minerals, including iron, vitamin B6 and zinc, although not in very large quantities.

The nutritional profile of garbanzo beans - aka chickpeas - is similar, with the exception that they are not as calorific, as olive oil in itself makes up a significant portion of the calories in hummus.

Hummus is considered an excellent source of plant-based protein and those who follow a vegan or vegetarian diet are often encouraged to eat it as the lack of meat in their daily diet can leave them short on the protein and iron they need to be healthy and energetic. 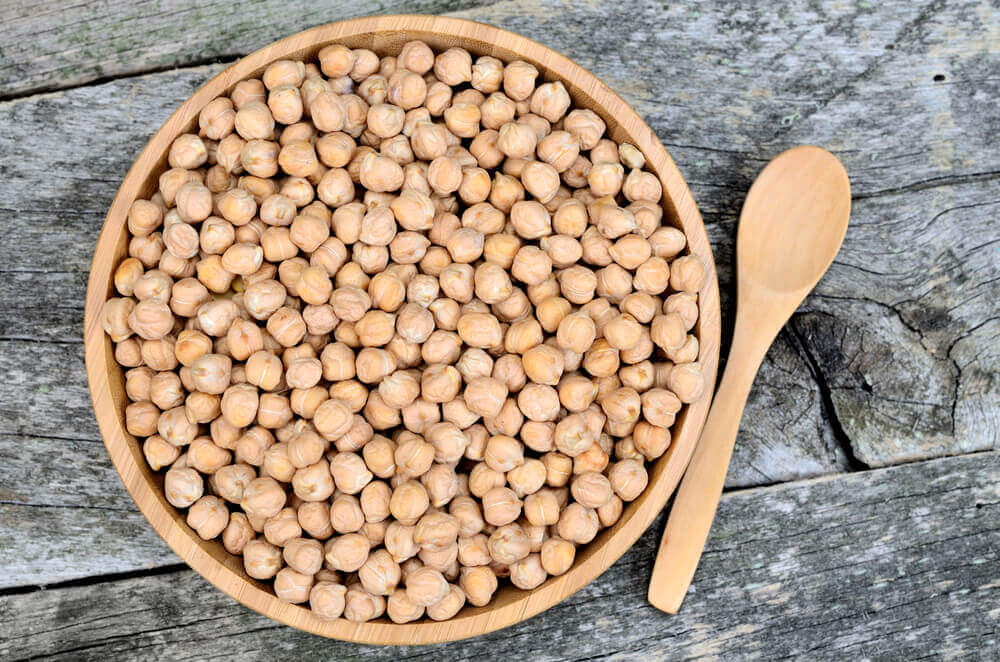 It can sometimes be hard for a human to understand that what's good for them is not necessarily good for their dog. This is certainly true of hummus. Feeding it to your dog sounds like a great idea as they too can benefit from protein, iron and many of the vitamins and minerals that hummus contains.

The possible health benefits of the primary ingredients of hummus - chickpeas and tahini - may include joint pain relief, as chickpeas contain some powerful antioxidants, and increased digestive health thanks to the relatively high fiber content in chickpeas.

There are, however, very few studies conducted on animals that are available to back these assumptions up, and what's good for humans does not always hold true for dogs.

However, there is no evidence that chickpeas are bad for dogs.

Health Risks of Hummus for Dogs

However, it's the additional ingredients needed to make a good human hummus - one that tastes really good - that are problematic for dogs. The tahini hummus contains, which is derived from sesame seeds, is also good for dogs, but it's the lemon juice, garlic and olive oil that are the problems. Especially the garlic.

Garlic is considered toxic for dogs. Dogs absorb certain nutrients in a different way than humans, and this pungent, but flavorful ingredient is one of them. Garlic and the other members of the allium family, including onions, contain thiosulfate, which is harmful to dogs but not to humans, according to the Merck Veterinary Manual.

A condition called hemolytic anemia can be caused by a dog ingesting thiosulfate (a type of oxyanion formed from sulfur).

This often results in oxidative damage to red blood cells and if left untreated can lead to permanent organ damage or death. Garlic, even in very small quantities, can lead to severe gastric upset in dogs too.

If your dog ingests garlic, either by sneakily snarfing some of your hummus or stealing some garlic infused goodies like certain pasta sauces, you should seek medical help for them as soon as possible.

Symptoms of thiosulfate poisoning in dogs include:

In larger dogs these symptoms can take a few days to appear, but if you know - or are at least fairly sure, your dog has eaten garlic or onions you should err on the side of caution and contact your vet for advice right away.

Lemon juice, while not as toxic for your dog, can also cause major tummy upsets and while the olive oil used to give hummus that smooth texture we love is not bad for dogs per se, vets recommend they consume no more than one teaspoon of olive oil per twenty pounds of body weight per day, so it's not something to be added to their food often.

How to Feed Chickpeas to Dogs Safely

You may have already noticed, if you spend any time reading the ingredients in commercial dog foods, that some list chickpeas as one of them. This is perfectly safe, and as chickpeas are a great source of plant protein, can be an excellent way to help your dog get the protein he needs.

Chickpeas are, in fact, a very versatile bean that can be used for far more than just making hummus. They are often used as the main component of many veggie burgers and other meat substitutes and when roasted make a wonderfully crispy snack that for humans is far healthier than potato chips.

You can feed chickpeas to your dog too, and, with the right recipes (more on those in a moment) you can whip up a dog friendly hummus that many dogs will love.

However, some pet parents, often those who prefer to consume a meat free diet themselves, wonder if the protein in chickpeas can be used to replace the protein in meat. Or, put more simply, if dogs can be vegetarians.

Should Dogs Be Vegetarians?

Unlike cats, who are carnivores and cannot remain healthy - and may even die - when not given meat, dogs are omnivores, meaning that they can survive on both plant and meat-based diets.

So technically dogs can be fed a vegetarian diet, but most vets agree that doing so can come with significant risks to their health and development.

The long-term risks of feeding a pup a plant-based diet exclusively can include all the following:

Before removing meat from your pup's diet, it's crucial that you discuss those plans with their vet. At the very least, they can help you determine ways to ensure that the switch will not leave your dog lacking in the essential nutrients they need and at best help advise you on the specific foods - and amounts of those foods - you can offer them in place of meat.

It's also worth noting that most humans have some very personal reasons for cutting meat out of their diet, often related to their personal beliefs and ethics. Dogs don't bother themselves with such things, so it's important that as a pet parent for you to put their health first.

Remember that dog-friendly hummus we mentioned? There are a number of ways you can make use of chickpeas, tahini and other common ingredients to create a hummus like treat for your dog. Will it taste good enough for you to eat? Probably not, so we won't advise that, although it would not actually do you any harm!

This recipe offers a filling hummus that makes use of pasta as well as those healthy chickpeas:

2. Using a hand blender, blend together until you are left with a paste like mixture.

3. Cook the green pea pasta until it is fork tender (aka al dente)

5. Serve to your dog as an occasional snack. This is not designed to be a full-time meal replacement!

To add some additional flavor, you can also introduce your dog's favorite cooked meat into his hummus. Some humans enjoy hummus that includes chicken chunks or bacon bits, and your dog almost certainly will too!