Can Dogs Have Lemon? 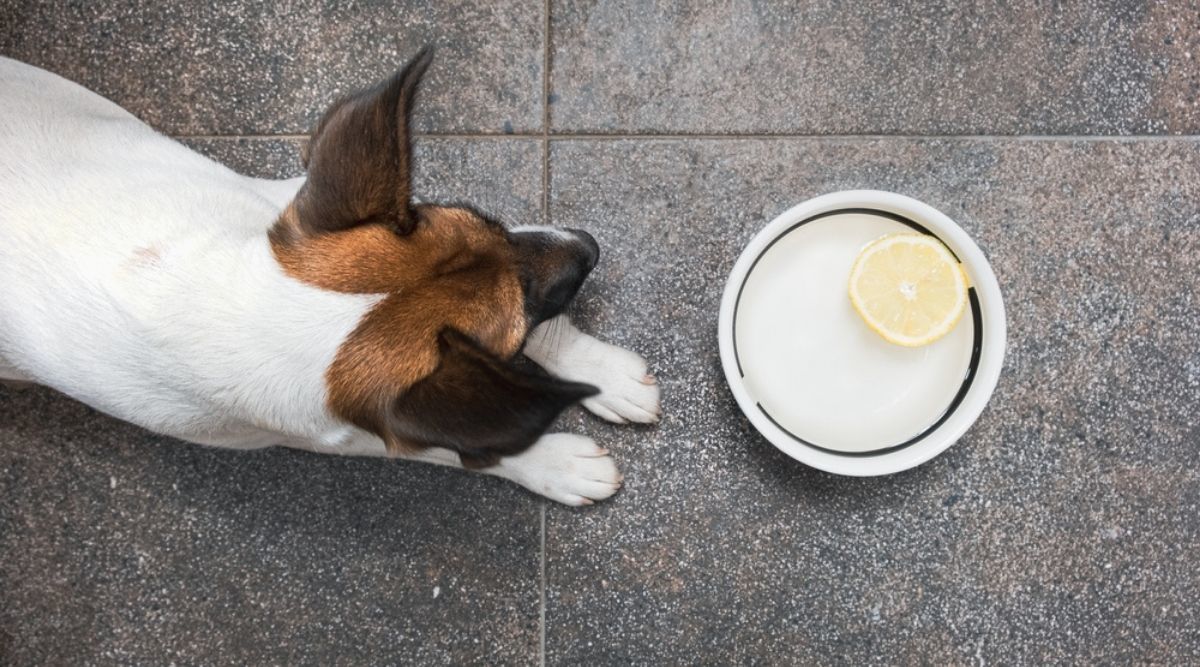 While the old saying that dogs will eat anything might not be quite true, it isn't far off the mark. Most dogs will try eating anything at least once, even if it is something they shouldn't. The problem for many pet parents is that it can be hard to know what is OK for dogs to eat and what might be a problem if they were to ingest it. For example, can dogs have lemon?

The short answer? If your dog steals a lemon slice from your drink, it’s highly unlikely to do him any physical harm. It's also highly unlikely that he would be anything but surprised and disgusted by its jarring taste. However, in larger quantities, lemon, and some other citrus fruits, in a number of different forms, may be something to avoid.

Here we are going to take a closer look at the issue of lemons, and other citrus fruits for dogs, and whether you should be concerned if your dog gets their paws on some.

Why Do Dogs (And Cats) Have an Aversion to Lemon?

In all honesty, the chances that you will have to worry about your dog eating lemons and grapefruits are very slim, as they simply hate the taste. Lemons are (as we're sure you know) very bitter, and evolution has taught canines that bitter things are bad.

Back when dogs had to forage for their own food to survive, any rancid meat or vegetation they encountered had a bitter taste, so even on the unlikely off chance that a dog thought they might like the taste of lemon their evolutionary memory is likely to kick in and warn them off it. The same is true of cats.

One of the mistakes some pet parents make is assuming that if something is considered 'good' for human health, then it must also be good for their dog.

This is sometimes the case, but often it is not. It is certainly not the case for lemons.

Dogs have a very different bodily and systemic make up to humans and do not need the same nutrients, the same amount of nutrients and do not always absorb the things they eat in the same way. While there is nothing in lemons that could be particularly harmful for you, that's not the case for your dog.

What Happens When You Feed Dogs Lemon?

Most pet parents expect that their dog won't like lemons. It's become something of a trend on YouTube and TikTok to exploit that expected dislike (and bad reaction) for likes, by feeding lemons to dogs, cats and even human babies and then filming their reaction.

Don't do that. It might be funny to some, but essentially it's animal cruelty (and not nice for those two legged tots either.)

But what might happen if your dog accidentally gets hold of a lemon, mistaking it for an oddly shaped ball, perhaps? Or if you feed your dog human food that has been liberally enhanced with lemon juice? When should you be concerned?

It's the citric acid in lemons, as well as limes and grapefruits, that is the biggest problem. If your dog only ingests a small amount, the worst that is likely to happen is that he ends up with a mild stomach ache. Not nice for him, but it will pass.

In larger quantities - as in eating several lemons or a whole grapefruit - the digestive upset is likely to be more serious, and, technically, could lead to a condition called central nervous system depression which can lead to multiple organ failure.

Much of this is theory however, as it is rarely seen in dogs, as most will reject lemons and citrus fruits all by themselves.

Some pet parents may be confused (and alarmed) as if you read the ingredient labels on some dog foods citric acid is listed there. Although this is very common, and you'll find citric acid listed as an ingredient in both high end and budget dry dog food preparations, experts are divided on the wisdom of the inclusion.

Many vets (and pet food manufacturers) consider the level of citric acid in dog food (and some cat food) a natural functional compound that, in the worst-case scenario, is harmless to your pet's health and well-being.

Others, however, point to a Tufts University School of Veterinary Medicine study that found that dogs fed a moistened dry dog food containing citric acid were 320% more likely to develop bloat than those who were not, or who were fed the same food dry.

As many pet parents know, bloat can be a serious, and even life-threatening condition in dogs. However, this was a single, limited study and has yet to be replicated.

Can Dogs Have Lime?

Lime is also a very acidic citrus fruit, and it's unlikely that any dog would like it very much either. However, if they were to consume it the effects would be similar to those of lemon, and the same is true of grapefruit.

Can Dogs Have Lemongrass?

Lemongrass is just that, a grass, that is used frequently in Asian cuisine, and is attractive enough that some choose to grow it ornamentally in their gardens.

Nibbling on a bit of it is unlikely to cause harm, other than your dog will likely develop a dislike of that particular part of the garden if you grow lemongrass out there, but the ingestion of larger amounts of it may cause stomach upset.

You don't have to dig up your whole backyard if there is lemongrass growing there, but fencing it off, or at least discouraging your pup from the area, may be a good idea if you want to be completely safe.

Can Dogs Have Lemon Juice?

Lemon juice is a common cooking ingredient, so its very bitter taste is hidden to a certain extent.

Your dog should not be in the habit of eating human food anyway - especially not food with a lot of dressings, herbs and spices, as it can be bad for both their digestive health and their weight - but if they do get hold off food with lemon juice added you can expect that at worst they will end up with a mild stomach upset.

There is no reason why dogs should drink ANY kind of human soft drink. The amount of sugar in most sodas and juices is problematic, and the artificial sweeteners used in drinks can be bad for dogs too.

It's highly unlikely that your dog would want to drink lemonade anyway, but if they did, it might result in a tummy ache.

Do Dogs Need to Eat Fruit?

Dogs, as omnivores, have no particular requirement for fruits or vegetables in their diet, although a treat of a dog safe fruit or vegetable is fine.

However, the idea that dogs need fruits and veggies to be healthy is mainly a media creation to promote certain dog food brands and is incorrect. Any of the vitamins and minerals dogs DO need can be provided by a simple, high quality meat based dog food.

Some dogs do like the taste of certain fruits, and some are OK to feed them if they do. In moderation apples, bananas, pears, blueberries and even oranges are all safe for pups, and they will get some extra vitamins from them.

There are also some fruits, fruits likely to be far more enticing to your pup's palate than lemons or limes, that should be avoided at all costs. These include:

Grapes - of any color - are toxic to dogs of any breed, and while larger dogs may be left to deal with severe digestive issues for some time in smaller dogs, ingesting grapes can lead to acute kidney failure in a very short amount of time.

If your pup gets their chops around any kind of grape, you should call your veterinarian for advice right away.

Did you know that cherries naturally contain cyanide? Not enough to harm a human in any way - Hercule Poirot will never be called on to investigate a cherry poisoning murder mystery - but they can be toxic enough to poison a dog.

If you suspect your dog has eaten cherries, watch for a sudden shortness of breath, dilated pupils and reddened gums and call your vet and Animal Poison Control.

Yes, tomatoes are a fruit, not a vegetable. While ripe tomatoes are generally regarded as harmless for dogs, the tomato plant's green parts contain a toxin known as solanine.

While a dog would have to consume a large amount of tomato plant to become ill, it's best to avoid tomatoes altogether just to be on the safe side, especially if yours is a smaller pup.

So, Can Dogs Eat Lemon or Not?

To sum things up, no, dogs should not have lemon. They almost certainly won't want it anyway. And if you want to make your dog a TikTok star highlight his cuteness, or her clever tricks, not her horrified reaction to being fed a lemon against their will!

If your dog has eaten lemon, its skin or seeds and he or she is acting abnormally or suffering allergy-like symptoms, be sure to call your vet, emergency clinic, or animal poison control center at (888) 426-4435 right away.