Every few years, a new 'superfood' makes a splash - primarily in the media - and it suddenly seems like everyone is trying it. One of those foods right now is quinoa. Even though humans have been eating it for thousands of years (more on that later) lots of us are just trying it for the first time. For good reason, since, as we will see, it has a lot to offer. But how about your pup? Can dogs eat quinoa?

The basic answer is yes, in moderation, dogs can eat quinoa. Or most dogs, anyway. Occasionally it might not agree with some pups' digestive systems, and some may flat out just not like it.

But is it even worth feeding your dog quinoa, and if you do, what health benefits might it offer him? These, and other issues, are what we are going to take a closer look at here. 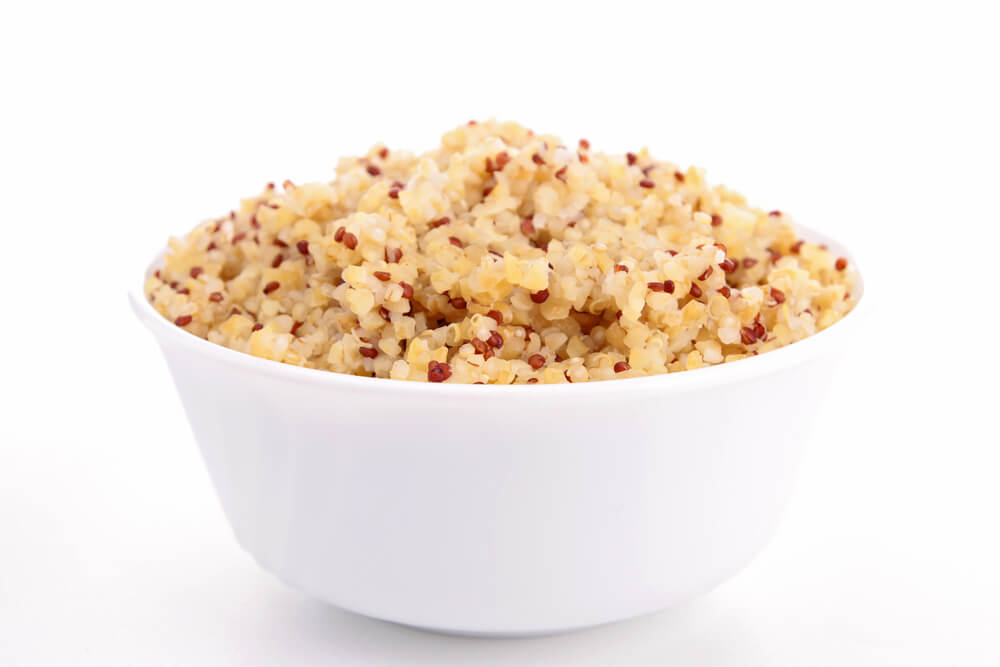 Quinoa (pronounced KEEN-wah or ke-NO-ah) is a high-protein, high-fiber, high-vitamin, and high-mineral food. It is gluten-free and suitable for those following a gluten-free diet. Although it looks like a grain, it isn't quite one, as it is closer in composition to a nut. It can, however, be used as a 'grain alternative' and made into a flour or served as an alternative to rice.

Although new to most of us in the West, Quinoa is a crop native to Peru, Bolivia, and Chile. It grows in the Andes Mountains and has been a staple of the diets of the local population for millennia.

Quinoa means "mother grain" in the Incan language, and there are over 3,000 different varieties too, although most of the quinoa you will find in stores is the white variety.

Unlike some 'superfoods' the nutritional value of quinoa is not disputed, at least as far as science is concerned. It is worth noting that dogs absorb nutrients differently to their human friends, and what is great for humans is not always great for dogs. However, most vets seem to agree that the good stuff in quinoa is good for dogs too.

In terms of nutritional value, there are differences between the types of quinoa. For example, red quinoa is considered more protein packed, while black quinoa contains more omega 3 fatty acids. However, the basic makeup of all the varieties is the same. According to the USDA, one cup of cooked quinoa breaks down as follows:

Is Quinoa Good for Dogs? 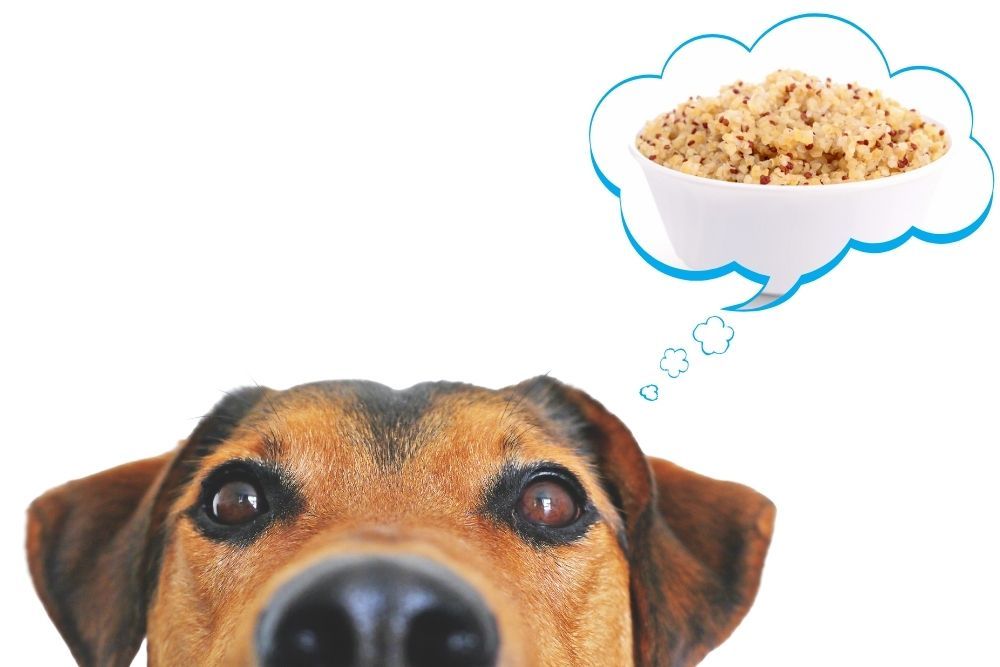 As we mentioned, most vets agree that quinoa is fine for most pups to eat in moderation.

Extraordinarily little formal scientific research has been done specifically on canines on the various 'healthy' elements of this versatile foodstuff, but it is believed that the elevated levels of complete protein, the healthy Omega 3 fatty acids and the fact that this is a good natural source of iron and magnesium is good news for both dogs and humans.

Quinoa is a nutritious alternative to processed grains because it is naturally low in salt and high in fiber and protein. It has a higher calcium, iron, and protein content than is found in other grains.

Quinoa contains both betalains and polyphenols, substances that have antioxidant qualities, which means they can repair and decrease inflammation in cells harmed by oxidative stress.

Fiber is an indigestible carbohydrate that aids in satiety, minimizes, and relieves constipation, and helps to maintain blood sugar levels by allowing food to enter the bloodstream more slowly. None of this is bad news for pups!

Quinoa is also gluten-free - and while no formal research has been completed on dogs and gluten yet, some pet parents feel that their sensitive stomached pups do better on a gluten-free diet.

The one concern that some people have about quinoa is that it naturally contains a type of saponins that not only have a slightly soapy taste but might cause stomach upset. However, the levels are extremely low, and a good rinse will remove most of the saponins, significantly decreasing that risk.

How to Feed Quinoa to Dogs

As we touched on, quinoa is very versatile, and it is being used in all kinds of human foods, as well as being eaten in place of rice, pasta, potatoes, and other side dishes. But how should you feed it to your dog?

Some commercial dog foods are in fact beginning to make use of quinoa in place of rice or wheat, so that might certainly be an option worth considering. Farmina N&D Functional Quinoa Skin & Coat is a popular choice, especially as all of its ingredients are organic, and the primary protein, quail, is a low fat, lean poultry option that also has a great flavor.

If your pup is a fan of treats - and what dog isn't - quinoa is increasingly being used in those too. Halo Vegan Dog Treats offer a sweet but healthy blend of quinoa, carrot and sweet potato that will add a little extra goodness to your pup's diet while he is being rewarded for his good behavior!

To make use of quinoa directly to feed your pup, it should always be cooked. Rinsing and cooking quinoa removes the soapy taste, and the potentially troublesome saponins, and gives it a soft, but not mushy, texture most dogs seem to enjoy.

When humans cook quinoa, they do tend to dress it up with oils, spices, herbs and oil or butter. Without these extras the taste is very bland, as is, of course, the case for rice, which it is often used to replace. While you can add some flavorings to quinoa for dogs (more on that in a moment) you should never add salt, margarine, or butter, as no pup needs any of that stuff.

Lots of pet parents are now making dog food for their fur kids at home, and you can make use of quinoa to add a healthy, protein packed kick to homemade dog food. This easy homemade quinoa dog food recipe from Modern Dog Magazine calls for just four ingredients and minimal prep and cooking time, so offers a wonderful way to find out if quinoa is something your pup finds palatable.

If ground turkey was not available at the store, you could make use of ground chicken instead and still maintain the lower fat, high protein nature of the recipe. You could also make use of ground beef, but the fat content will be higher if you do, something that may not be the best idea for pups who need to watch their weight.

Do watch your pup after he eats, to make sure that this new addition to his diet does not cause stomach upset. 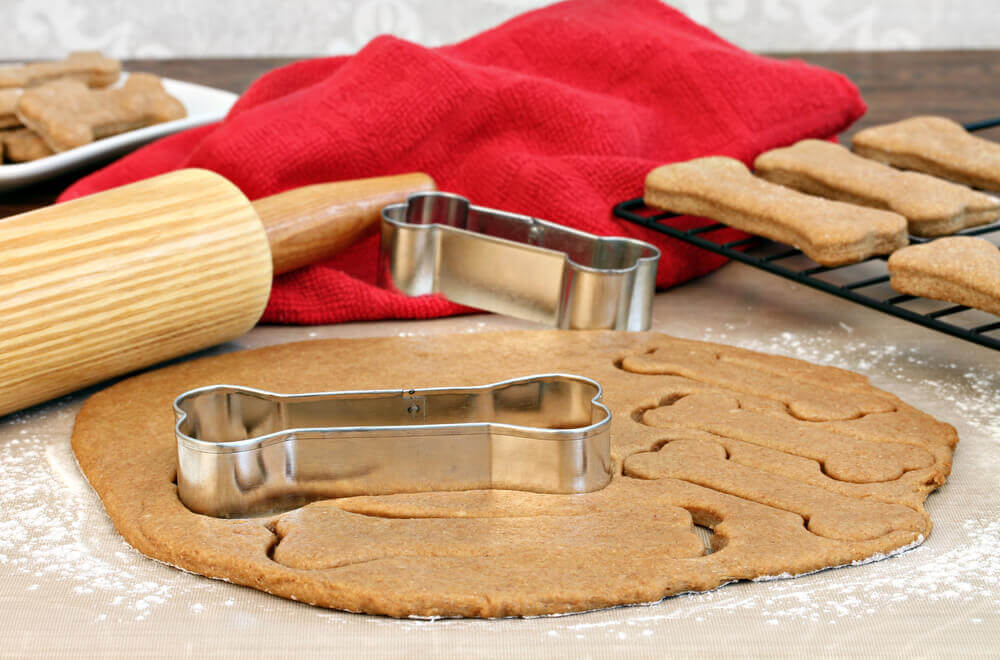 Making your own dog treats allows you to control just what goes into their treats and will usually save you money as well. While commercial quinoa dog treats contain some great ingredients, they do come at a premium price.

Want to give making some homemade dog treats a shot?

Here is an easy recipe from Simply Quinoa to get you started, and as it is completely grain free, it will suit pups who are sensitive to the stuff.

So, Is Quinoa OK For Dogs to Eat?

As long as you rinse and cook quinoa, yes, for most dogs quinoa is fine to eat, and it makes an excellent alternative to rice, as well as a terrific way to add extra protein and minerals to a grain free diet.

As should always be the case when feeding your pup anything new, introduce quinoa slowly and stop feeding it if it seems to cause stomach problems.