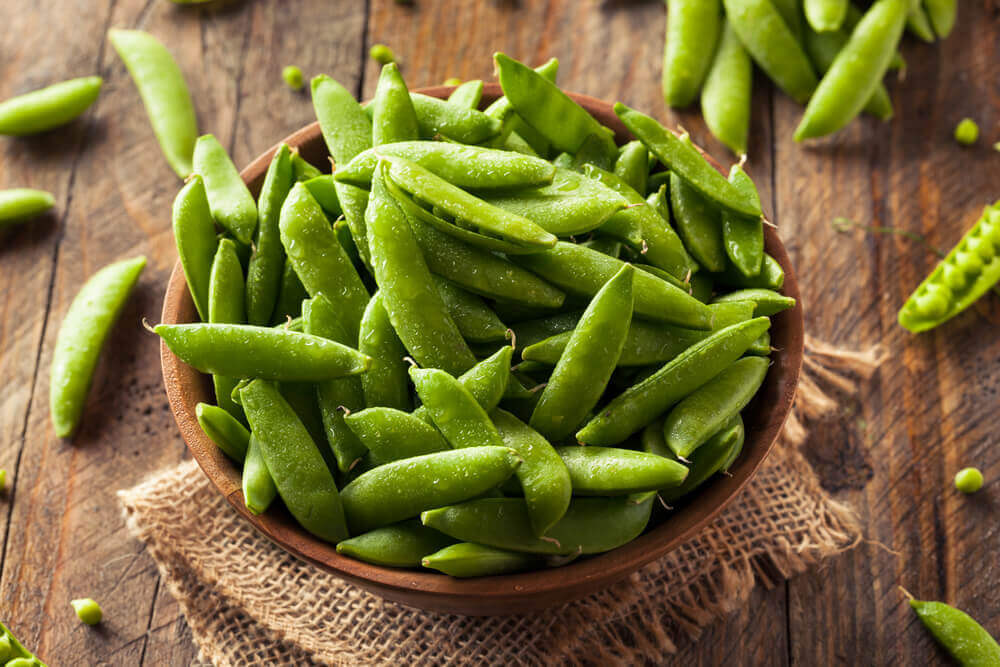 Peas are one of the most versatile vegetables that humans can choose to eat, and they're a healthy addition to any meal. Snap peas - more formally known as sugar snap peas - are a little sweeter than other peas and make a great side dish or addition to all kinds of meals.

Humans love them, both for their taste and their ease of preparation, but how about your canine friend? Can dogs eat snap peas?

The short answer here is yes, dogs can eat snap peas. Whether they will or not is another matter, as some dogs feel the same way about veggies as lots of human toddlers do: yuck. However, if your dog seems to like them, snap peas won't do them any harm in small doses as an occasional treat.

This question brings up lots of others, though. Can dogs eat ANY peas (there are a number of different kinds)? Do peas offer health benefits to dogs? Can peas be given to a dog as a part of a vegetarian diet? Should dogs even be vegetarians? These, and other questions, are what we are going to take a closer look at here.

What Are Sugar Snap Peas?

Sugar snap peas are actually the result of some 1970s era plant based genetic engineering.

They are the result of crossing a standard garden pea with the sweeter, and slightly more exotic, snow pea. The idea was to create a pea variety that retained the crunch of a snow pea but added the sweetness of a garden pea. Snap peas also lack the tough outer pod that garden peas grow with, their casings are much softer, like snow peas.

Sugar snap peas can be used anytime you might make use of other pea varieties, but they are especially popular in stir fries, and as they can be eaten in their soft pods are often considered heartier than a plate full of garden peas.

All peas offer nutritional benefits. Wondering what's in a sugar snap pea? Here's a look at the breakdown, as per the USDA per 100g (about a half cup) serving:

Sugar snap peas are also rich in vitamins A, C, and K and minerals Folate, Magnesium, Phosphorus, Potassium and Manganese.

As you can see, sugar snap peas (the nutritional values of both garden peas and snow peas are very similar by the way) offer plenty of vitamin C and are a good source of Vitamin K, which helps with efficient blood clotting.

Can Dogs Have Snap Peas?

As we mentioned earlier, snap peas won't do your dog any harm.

The research into how many health benefits they can offer dogs is minimal and a little murky. There are a few studies that have suggested that peas of all kinds may help prevent canine heart disease, and that is perhaps the reason you'll find peas listed as an ingredient in an increasing number of commercial dog foods.

That research, however, is currently inconclusive and in its infancy.

What Health Benefits Do Sugar Snap Peas Have for Dogs?

Dogs can almost certainly benefit from the protein and vitamin C peas contain, and, as is the case for their human friends, the fiber snap peas - and other pea varieties - contain helps maintain a healthy digestive system.

However, dogs should not be fed a lot of any kind of pea, as they should be getting this basic nutrition from their daily dog food.

If a dog is healthy, the only risk feeding them snap peas may pose is choking, should you decide to keep the peas in their pod (which is the way most people cook them.) Larger dogs should be fine, but smaller dogs may struggle to chew and swallow the pods properly.

Dogs known to have kidney problems should not be given any kind of peas, including snap peas.

Purines are a naturally occurring chemical component that are found in higher quantities in peas. Purines generate uric acid, which is filtered by the kidneys and can overwork them. Renal stones and other kidney problems can be caused by too much uric acid, which can be very problematic for dogs.

How to Feed Snap Peas to Dogs

If you are going to offer snap peas to your pup they should be an occasional treat and fed as a steamed, plain cooked addition to their daily diet.

Lots of us like to flavor our snap peas with butter, salt and sauces like soy sauce, but dogs should not have a lot of any of those things, so feeding your dog snap peas straight from your plate is not something you should be doing.

When they are steamed snap peas are soft - including their pods - and they may be more tempting to some dogs as they do have a little more 'natural' flavor than garden peas, which, when not 'dressed up' with other flavorings, can be rather bland.

Is Dog Food With Peas Bad for Dogs?

As mentioned, if you check the ingredients of many commercial dog foods, peas (of an indeterminate variety) are often listed quite prominently.

Up until recently, many people, vets and other canine medicine experts, thought this was fine, but a new study conducted by the FDA and published by researchers at Tufts University found that it might be the peas in grain-free type dog foods that are the biggest contributors to the increase in diet-associated canine heart disease (DCM) that the FDA has been investigating since 2018.

While we cannot establish with certainty if any of these compounds and ingredients are causal for disease, the findings support peas as a leading possible ingredient associated with diet-associated DCM in dogs.

With that said, the FDA are not considering a ban on peas in dog foods yet stating that:

legumes and pulses [e.g., peas, lentils, etc.] have been used in pet foods for many years, with no evidence to indicate they are inherently dangerous.

Rather, the issue pinpoints to the quantity used, as analysis of data reported to Center for Veterinary Medicine indicates that:

pulse ingredients are likely used in many “grain-free” diets in greater proportion than in most grain-containing formulas.

Despite the fact that peas has been singled out as an ingredient strongly linked to canine dilated cardiomyopathy, according to Lisa Freeman, DVM, PhD, DACVN, a professor at Cummings School of Veterinary Medicine at Tufts University, and one of the lead author of the latest study said,

We don't yet know if peas are causing any problems in dogs eating these diets.

Should Dogs Be Vegetarians?

All of this talk of peas raises a very common question being asked by pet parents today. As an increasing number of them adopt a vegetarian or vegan diet, they wonder if their dogs should too.

This is another confusing issue.

Dogs, experts say, can live on a vegetarian diet, as they are naturally omnivores. Cats cannot, as they are carnivores, and a meat free diet will likely make them very ill. Dogs however don't 'need' vegetables in their diet in the same way as humans do. They are predominantly carnivorous in the wild, resorting only to vegetables if nothing else is available.

So, while you might need those '5 a day' dogs really don't, and things like snap peas should really only be an occasional treat.

The biggest issue, however, for dogs being 'asked' to give up meat in their diet is a lack of acceptance.

While some dogs will happily gobble up veggies like peas, broccoli and carrots, more will turn their noses up at such things and hold out until they get what many of them really want: meat.

Many pet parents find they can overcome this by gradually replacing meat with vegetarian alternatives - in the same way as you introduce any new dog food to your dog, bit by bit - and that their dogs learn to like their meat free foods just as much.

The one thing you will need to be very mindful of however is that your dog's nutritional needs are still being properly met.

If you are going to increase the amount of non meat ingredients in their diet, you will need to be as careful as you would if planning your own meat free diet.

All the nutrients dogs get from their meat will still need to be present - this is especially true of protein - and so you will need to read commercial dog food labels very carefully, and perhaps even consider making your own.

It should also be noted that even if you are vegetarian for moral reasons, if your pup refuses to accept becoming one - and some do, and can be very stubborn about it - you can't explain to a dog why he's being asked to change.

If you are considering making a drastic change like this to his diet, you should work closely with your vet to ensure you find ways to get him the nutrition he needs to stay happy and healthy.

So, Are Snap Peas OK For Dogs To Eat?

In conclusion, yes, dogs can eat snap peas. But don’t plan on making them a staple of their diet. Offering them to pea loving dogs as an occasional treat, however, should be just fine.