Help! My Dog Ate Raw Chicken: Should I worry?

Whether your dog accidentally ate raw chicken or you are contemplating a raw meat diet, here’s what you need to know.

Table of Contents
My dog just ate raw chicken. Should I worry?
Why can dogs consume raw chicken and humans can't?
Can dogs eat raw chicken?
What are the scientific reasons for and against a raw meat diet?
Symptoms of salmonella infection in dogs
When To See Your Vet

If your dog has eaten raw chicken and he is acting abnormally or suffering allergy-like symptoms, be sure to consult with your veterinarian.

My dog just ate raw chicken. Should I worry? 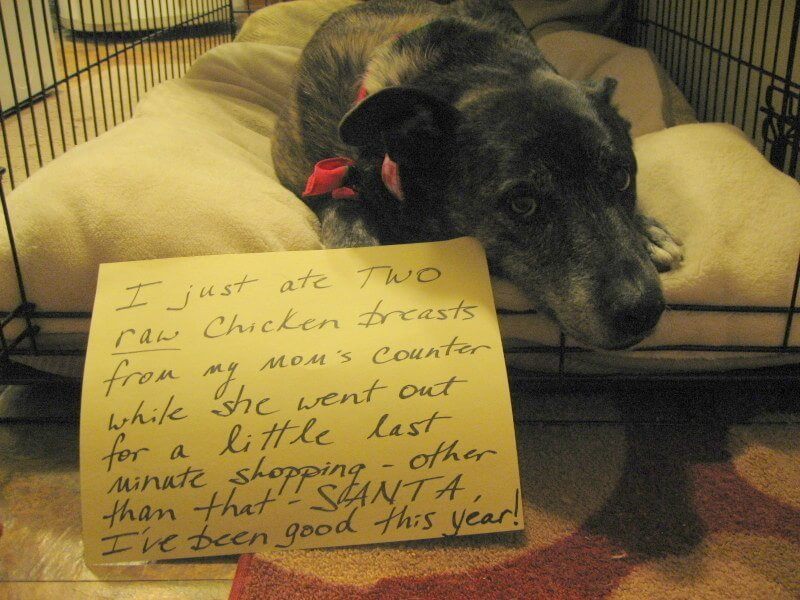 Probably not! In most cases, your dog will be just fine. The first time a dog eats raw chicken may be a cause for concern since they've never eaten it before and you don't know how they'll react.

Poultry is also one of the top culprits behind canine food allergies, according to Merck Veterinary Manual.

Whether or not your pup has adverse effects depends largely on the dog and chicken. Certain dog breeds might be allergic to chicken and can develop this allergy at any stage of their lives.

Chicken is the third most common food behind your pet dog’s allergies.

If your pup ate boneless chicken, they may only exhibit mild symptoms such as vomiting or diarrhea due.

The bigger concern would be if the chicken had bones, then further steps might be necessary.

The brittle nature of chicken bone when cooked makes it splinter into sharp fragments when a dog chews on it. The fragments can bruise or puncture the intestine as it passes through. Either way, monitor your dog closely for adverse signs like lethargy, abdominal pain, etc.

With boneless chicken, consider fasting your dog for 12 - 24 hours so her gut has time to reset after such a high-protein but unusual meal.

If the chicken had bones and your dog is acting abnormally or suffering allergy-like symptoms, get him to the vet asap.

Why can dogs consume raw chicken and humans can't?

Because dogs have a far more capable digestive system than humans do. Their system is much more resistant to much of the bacteria that makes us sick. 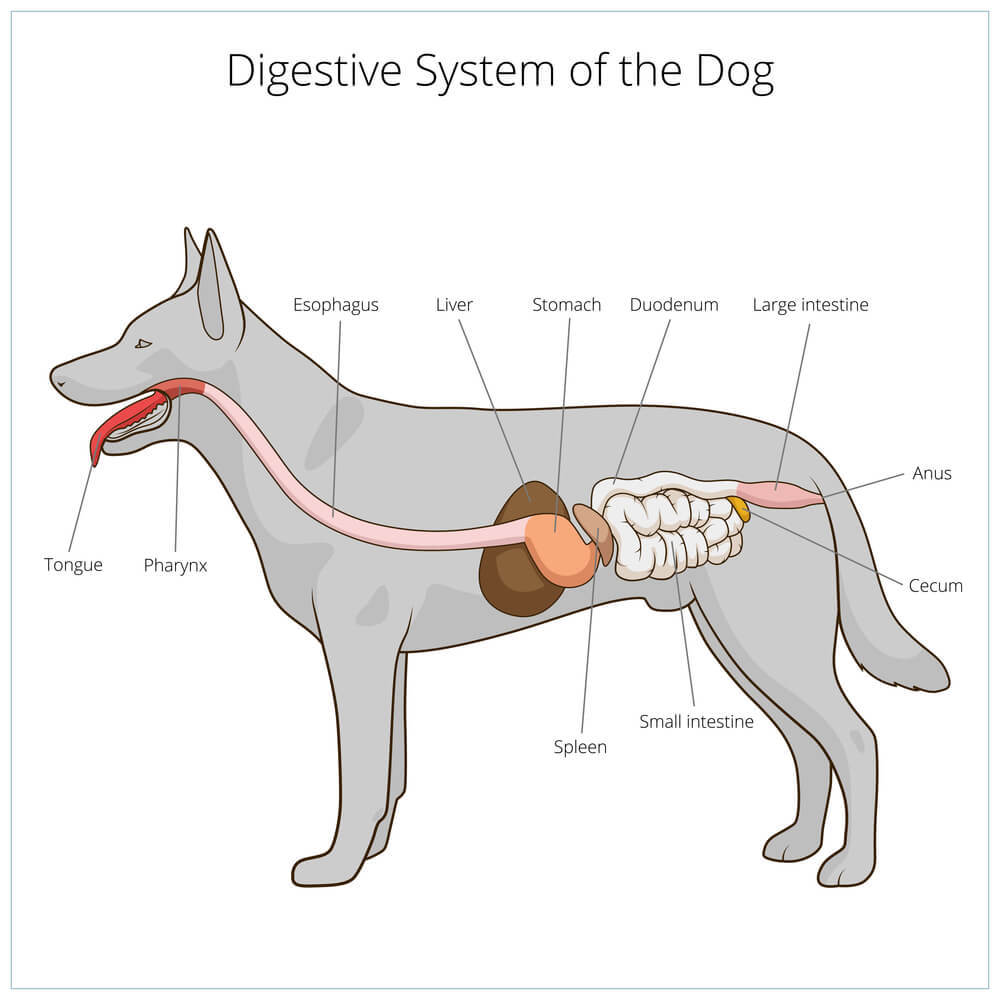 Humans have 32 teeth, while dogs have 42, and are designed to crush dense objects. Their teeth are sharper, leaner, and more solid than human teeth.

A dog’s teeth is designed to tear and chew into tough surfaces. A dog’s jaws can only move up and down, giving it more crushing power, and that’s the reason they can handle bones better than us. Our teeth have a flat surface for grinding, our jaws move side to side in a circular motion.

Both dogs and humans have saliva that lubricates food and contains enzymes. The enzymes in a human's saliva initiates digestion, the one in a dog’s saliva kills off bacteria. That’s why your furry friend can sometimes eat old or expired meat without getting sick.

Much of the bacteria in food is killed off in their mouth before reaching an even more formidable bacteria killer in a dog’s stomach.

The esophagus also plays a role in a dog's ability to eat raw chicken without triggering off allergies. Its excellent gag reflex allows a dog to swallow larger food particles without much chewing, like bone fragments.

A dog's stomach contains about 100 times more acid that is 10 times stronger in concentration than that of humans.

Such startling amount and concentration of acid makes it to for a canine to digest larger food particles and bones.

Food stays for about an hour in a human stomach before moving to the smaller intestine, although it can take longer for more complex foods.

Food stays longer in a dog’s stomach to give the hydrochloric acid and enzymes more time to digest the food. That’s why all of the bacteria in raw chicken is far likelier to be killed off in a dog’s stomach than in a human’s. It also explains why dogs can survive on one or two meals a day as they feel full for longer.

But unfortunately, the longer food stays in the stomach, the more likely bacteria are to gain a foothold. That’s another reason humans are less potent to handle the bacteria in raw chicken.

In dogs, their digestive tract is a lot smaller. Because of that there is less time to absorb nutrients. So they do better on meats, bones and organs but have a hard time digesting complex foods such as plants and grains. 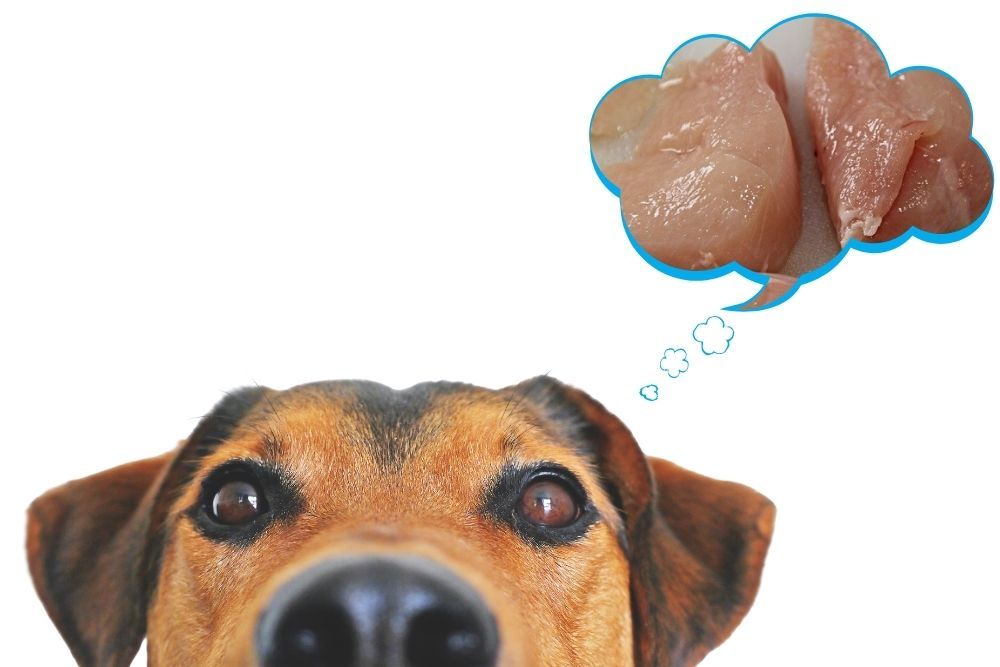 Yes, but with a few caveats.

Feeding dogs a raw diet is a hot and controversial topic.

For starters, chicken is a very important source of protein for both dogs and humans. The sheer number of dog-food brands using chicken as an ingredient underlines the safety and importance of chicken as food for dogs.

However, vets caution against putting your dog on a raw chicken diet, due to some rare but adverse risks. Salmonella and other bacterial infections can occur in dogs that consume raw chicken.

The reason dogs can eat raw chicken is because their gut system has more acid and can kill off harmful bacteria quicker than humans. However, this does not imply that every dog can handle eating raw chicken without experiencing some side effects.

In the majority of cases, dogs can eat raw chicken as long as you adhere to these rules.

Study your dog closely for any allergy reactions. Only when you are convinced your pup is not allergic to chicken should you continue.

As we've alluded to previously, there is a risk of salmonella infection. Salmonellosis in dogs (and cats) isn’t a common occurrence.

But these pets also can be carriers. Which means that even without symptoms of salmonellosis, after eating a raw chicken meal, your dog can still spread it its surroundings through its stool or saliva, which can infect neighboring people and pets, especially those with poor immune systems. You may get salmonellosis by kissing your dog, licking your face or if he accidentally poops in the house and you don't immediately wash your hands.

What are the scientific reasons for and against a raw meat diet? 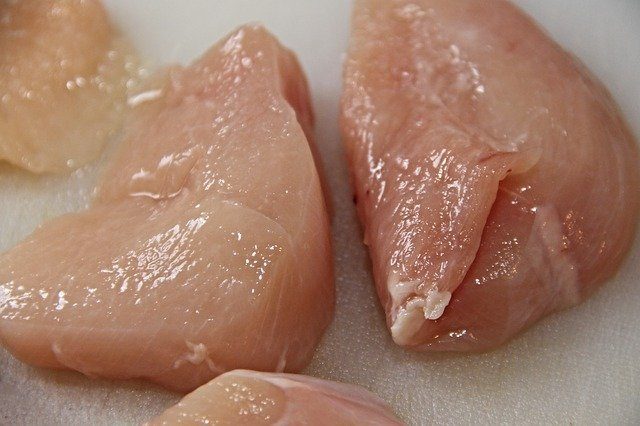 Experts offer several reasons for and against the safety of raw meat diet for dogs. There is much bias in the debate because the main parties involved have market interests to protect.

The pet food industry argues that there isn’t substantial evidence of the benefits of feeding dogs a raw diet that balances or outweighs the risks.

However, the absence of any study proving that the benefits of raw meat outstripping the risks isn’t reason enough to condemn a raw diet.

The pet food industry also says, it is a universally accepted fact that raw meat is more harmful to humans than cooked meat.

To demonstrate the flaw in this study to which the pet food industry refers, about 58% of dogs harbor Campylobacter in their gut system. This includes dogs not being fed a raw diet.

Which means there are other sources of the bacterium. Actually, the Australian study isn't much different from what was known by many scientists years ago. Besides, the university of Melbourne holds that APN is a rarity in dogs, and most will recover without treatment.

Both sides allow bias in their argument, but there seems to be more bias from the dry pet foot industry. And that is understandable. A massive switch to raw foot diet would spell doom for the pet food industry.

Considering ancestor dogs have digestive systems designed to feed mostly on raw meat, it’s clear that nature has provided dogs with all the defenses against much of the bacteria commonly found in raw chicken.

Symptoms of salmonella infection in dogs 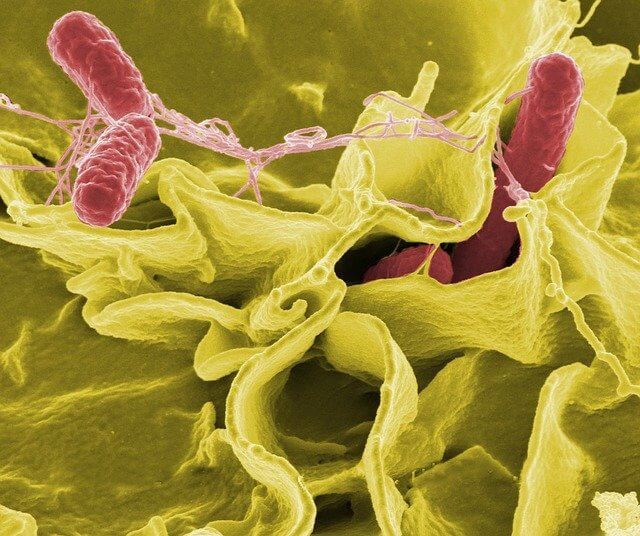 There are several symptoms of Salmonella infection resulting from ingesting raw or undercooked meat and eggs.

Below are the signs of salmonella infection in dogs:

When To See Your Vet

Err on the side of caution, if your dog displays any abnormal behavior immediately after eating raw chicken, give your pet a call.

And, especially if the chicken had bones, take him to be seen by a vet as soon as you notice any symptoms.

In serious salmonella infection cases your pet may require hospitalization and be put on intravenous fluid therapy. If a blood infection occurs, your dog may need a plasma or blood transfusion.

Your vet may also prescribe steroids to prevent shock in severe cases and your dog will be off food for 48 hours until their system is fully flushed out.

Dogs with weaker immune systems, puppies and older dogs are at a greater risk of infection.

Medical Disclaimer: If you are concerned about your pet, visit or call your veterinarian – he/she is your best resource to ensure the health and well-being of your dog. This information is for informational purposes only and is not intended to help assess or manage animal exposures or as a substitute for the professional advice of, or diagnosis or treatment by, your veterinarian with respect to your pet.