Goldendoodle or Golden Retriever, which one do you choose as your family pet? Both of these breeds are intelligent and pretty easy to train. So, what's the difference between the two and how do they measure up side by side?

The simple answer is, it depends on what you are looking for in a dog. Are you bringing your new pup into an active family? Do they need to be good with children or other pets? Each breed has its own pros and cons to consider.

The main difference is that a Goldendoodle is a cross-breed between a Golden Retriever and a Poodle, whereas, Golden Retrievers are purebred dogs. We'll take you through the qualities of both breeds to help you decide which would be best suited for you. 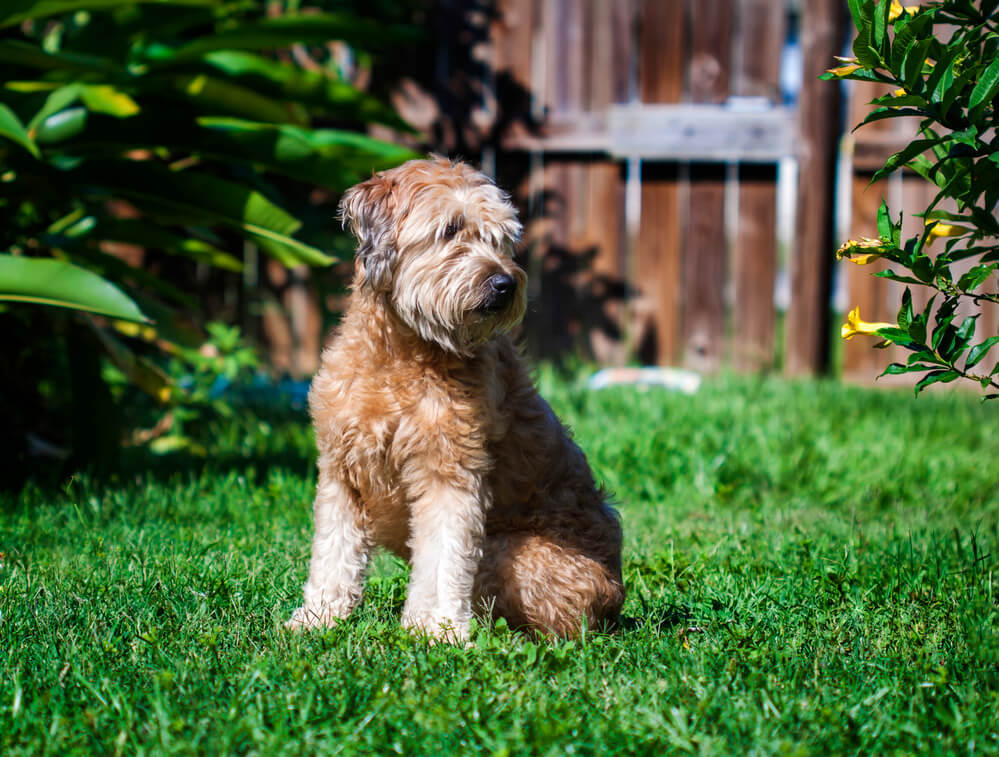 Goldendoodles, also known as Groodle, Goldenpoo, or Goldiepoo, are a cross between a Golden Retriever and a Poodle.

A Goldendoodle's coat can be curly, wavy, or straight, and comes in a variety of colors, with the most common being cream, red, brown, and black. Their muzzles are shorter and their tails are longer than Golden Retrievers. Their noses, lips, and eye-rims have a pinkish-brown color.

Golden Retrievers generally weigh between 55 to 75 pounds and stand between 21 to 24 inches in height. Their coats have a double layer, with the undercoat being shorter. This is to help protect them from the cold. The outer layer of their coat is wavy and most have some variation of the golden-red color they are known for. However, there are breeders who breed an English cream, or white golden color.

Goldens have a well-built symmetrical body, a straight long muzzle, and a very kind and intelligent expression. Their tails tend to be fluffy with a bit of a curve. Their coats can be wavy or straight with some moderate to heavy feathering on the neck, underbody, legs, and underside of their tail.

What is the Difference between a Goldendoodle and a Golden Retriever?

Wondering how Goldendoodle and Golden Retriever match up when it comes to their vital statistics and general bred characteristics? This table offers an overview of those 'stats' at a glance:

Now that we've had a look at each breed, let's compare these two side-by-side. 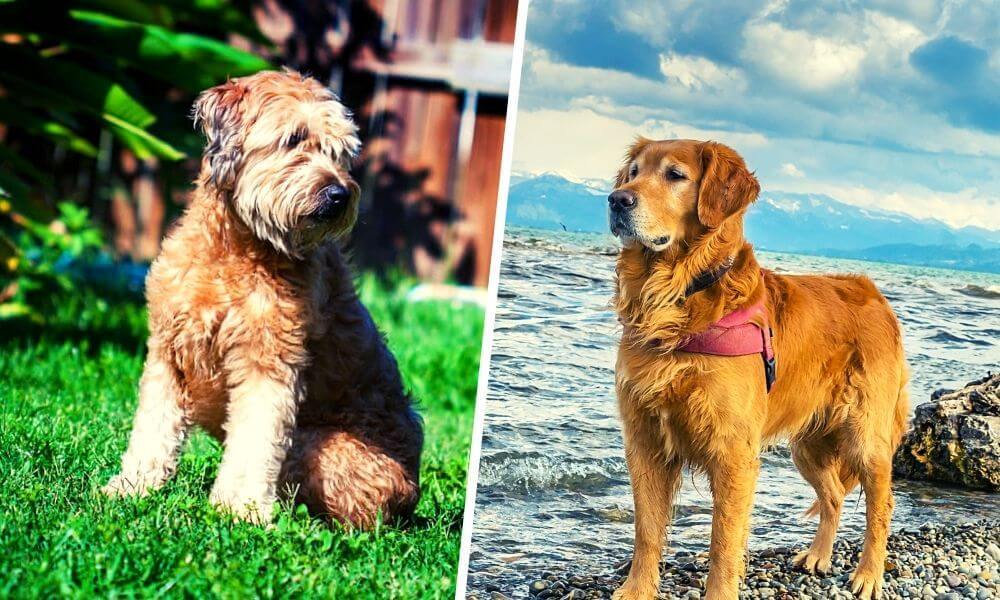 Goldendoodle vs Golden Retriever Dog Side by Side

The breeding of Goldendoodles started in 1969 by Monica Dickens, a breeder who was looking to create a cross-breed with a more hypoallergenic coat (like the Poodle's) to be used as a guide dog (friendly like the Golden Retriever).

The Golden Retriever has a far richer history that starts in the 1800s. A man named Dudley Majoribanks was trying to breed the perfect hunting/gundog that was suited to the rough terrain and weather of Scotland.

Golden Retrievers have an accepting nature, are people-pleasers, playful, and patient. They also get along well with other pets and small children. They do tend to be chewers though and may “play” bite, however, this is something that you can train out of them at a young age. Goldens also do not like to be left alone for long periods of time and love spending time with the family pack and going on adventures together..

Golden Poos can be quite energetic and friendly. It's their friendly nature that makes them not the best choice as a guard dog though. They are intelligent and sociable, so tend to get along with other dogs. They can sometimes have anxiety issues though, passed down from their Poodle parent.

Both breeds are very popular, which means they can be a bit expensive. A Goldendoodle puppy can cost between $2,000 and $4,000 and a Golden Retriever puppy can cost between $500 to $3,000. Price will depend on the location, breeder, and what the pups are being bred for. Those that are bred specifically as a family pet tend to cost less than those bred as show dogs.

Goldendoodles need more grooming than a Golden Retriever because of the texture of their coat. Their curls are what make them hypoallergenic, but they do need to be brushed once a day and trimmed every couple of months to reduce the chance of matting.

Without daily brushing and proper maintenance, both breeds' coats can become matted and tangled very quickly. And in the case of the Doodle Mix, because of their low to non-shedding coat, Goldendoodles are prone to matting.

Golden Retrievers shed more than Goldendoodles, so they will need to be brushed at least once or twice a week, and more often when it gets to shedding season. Both need to have regular trimming of their nails.

The longer life expectancy of the Goldendoodle is down to their Poodle parents and the fact that they are smaller dogs, which tend to live longer than larger dogs.

However, keeping ANY dog in optimal shape can add a couple of years to his life, while letting him become obese can take years off of it.

Both breeds are pretty easy to train and socialize due to them being intelligent and loving to learn.

However, the Golden Retriever is easier to train because it is a people-pleaser at heart. Training should be positive and reward-based for both breeds.

Goldendoodles can be somewhat anxious by nature and may need a bit more socialization training. They are also a bit on the stubborn side because of their independent natures, so can be a bit harder to train than the Golden.

Goldendoodles can be more vocal than Golden Retrievers, who are more moderate with their barking. However, the barking will differ from one dog to the next and depend on the situation. Goldens will bark when approaching a stranger or welcoming someone in order to get a pat.

Also, if your Goldendoodle or Golden Retriever has a lot of pent-up energy, they may bark more.

Both breeds have similar requirements when it comes to exercise needs since they are both very energetic breeds. To keep them happy, healthy and maintain their temperament, they need a good amount of both daily mental stimulation and exercise.

They need at least one or two walks a day and some off of the leash play or high-intensity activities  to free up pent-up energy and avoid becoming agitated and destructive. 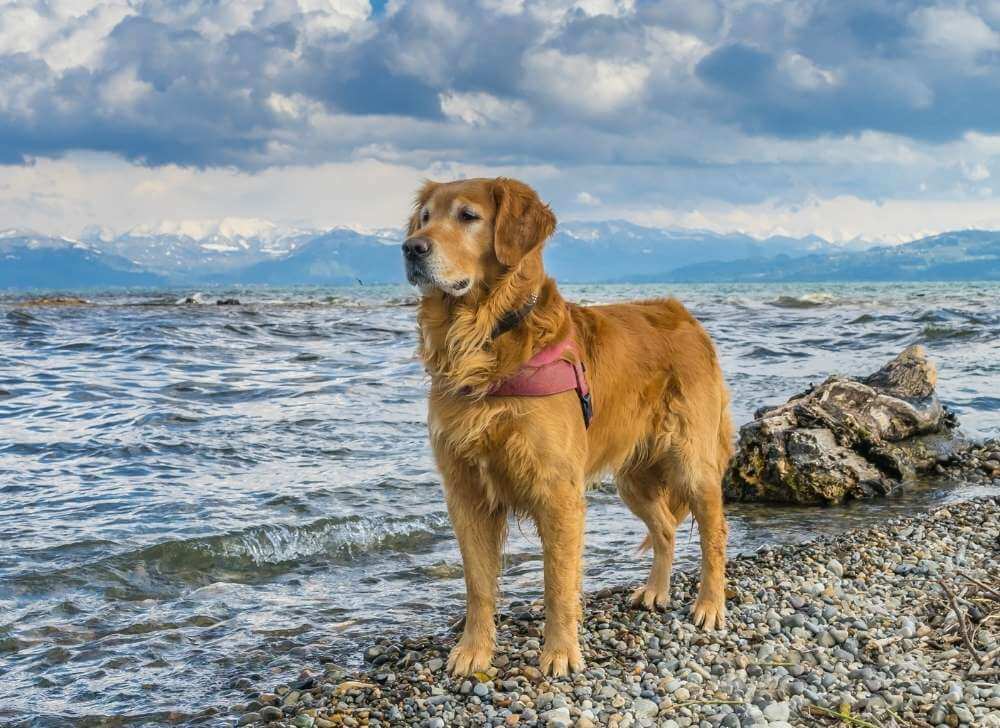 The Golden Retriever is a well-balanced, sturdy dog with a deep chest and strong, muscular body.

One of the things that Golden Retrievers are known for is their gentleness, which is an inherited trait of the Goldendoodle as well. So both breeds are good around children and affectionate with other pets and make a good choice as a family dog.

Saying that, both breeds need to be socialized while they are young and when it comes to other pets in the home, they need to be properly introduced.

When it comes to feeding and diet, both breeds will do well on a high-quality kibble rich in protein and fats. Food should have a high concentration of protein, moderate fat, and be carbohydrate limited.

Goldens are prone to becoming overweight, so watch your dog's calorie consumption and weight level and give treats only in moderation.

Puppies need protein to grow and develop, and adult dogs need it to support healthy body weight and lean muscles.

Goldendoodles'  diets should consist of primarily protein and fat-based foods, along with vitamins for their nourishment.

Should I Get a Goldendoodle Dog?

Goldendoodles are a great choice for active families due to its energetic nature. Because they are smaller than Golden Retrievers, they are a good fit for smaller children. They make great service and therapy dogs and are the best fit if you need a dog that is more hypoallergenic. This designer breed are suitable for both first-time and experienced pet owners alike.

However, we recommend to do a background check and see if they suit both your hypoallergenic needs, time management, and lifestyle and to verify the dog breeder you are buying from or the shelter you are adopting.

Should I Get a Golden Retriever?

Because of their gentle and kind nature, Golden Retrievers are a good match for families with children. Being a medium-energy dog they're pretty amazing with children, even though they are larger dogs. Goldens are best suited for active singles, couples, and young families. They are also great guide dogs for the blind and service dogs for search and rescue.