Crate Training Woes? Learn How To Crate Train a Puppy Fast in 7 Steps

The truth is that a crate is both a dog's and his owner’s best friend when it comes to training.

You would never think of leaving a baby unattended to wander around the house while you cook dinner, change the laundry or attend to personal needs so why would you allow a puppy?

How To Crate Train a Puppy

Far too many well-meaning owners find themselves mistreating, punishing or disposing of a potentially good pet because they failed to understand common puppy behavior.

These actions could have been avoided with the proper use of a crate.

Dog crates have been used by show handlers, obedience trainers, breeders, groomers, and veterinarians with great success for a very long time.

Crates can be made of metal, plastic, fiberglass, and even wicker.

When it comes to choosing the best dog crate - metal is the preferred choice since it can’t be chewed and, with care, they last forever. They should have a top and a door with a latch, and a floor pan that you can slide out for cleaning, and are made in a variety of sizes.

The crate should be high enough to allow your dog to sit up without touching the top, turn around easily and stretch out when he lies down. The size should be calculated for an adult dog, not a puppy.

Naturally, if you are buying a large breed such as a Mastiff or St. Barnard the crate will be large so you will need to buy a divider to shorten the size of the crate when housebreaking a puppy.

This can be moved as the dog grows, and then removed when no longer needed

Inside the crate you will need a blanket or rug. Or if you like you can use bath mats with a rubber bottom. They can be cut to fit the floor pan without fraying and are easily washed if soiled. 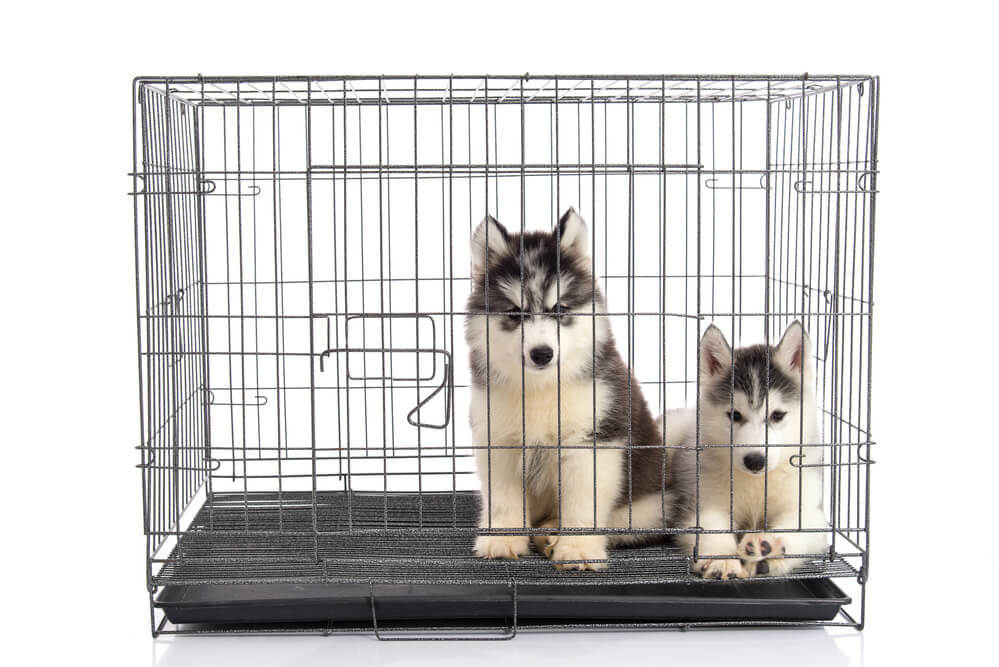 The size of your dog crate should be measured for an adult dog, not a puppy.

You will also need a small water bucket with a handle that you can clip to the crate wall to prevent spilling. The bucket should be wide enough for your dog to reach the bottom without getting stuck.

Stainless steel is the best, it prevents your puppy from chewing, and can be placed in the dishwasher.

As we've already said invest in a crate your puppy will be able to stand up without bumping his head and be able to turn around, get in and get out quite easily.

A 24-inch crate is your best pet for the first couple of weeks.

The Aspen Pet Puppy 2-Door Training Retreat Crate is a cute little den for your playful puppy and comes in a baby-blue or pink color.

Staying along the same theme of fun and colored kennels, the Midwest suite of folding crates is another great choice.

Foldable crates are great for apartments or small spaces since they are easy to fold up and store away.

Lastly, consider getting a large crate with a divider to help minimize and expand his space withing the crate as your puppy matures.

Place the crate in an area where it is out of the way of traffic but where your pup can see the family activities.

This area should be free from drafts but not near a heat source. If the room tends to be cool a light blanket or sheet tossed over half of the crate will keep the puppy warm enough.

Fill his water bucket a little more than half way and place his chew toy where he will see it.

4. Introducing Your Puppy to the Crate

Training begins as soon as you pick him up at the breeders, not only for him but for yourself as well.

When you bring your pup home and if he balks at the crate, don’t fight him. His crate is his “safe place”, his little den. It is never used as a punishment.

When you pick up your pup, take an old towel with you to rub on his Mom so her scent will attract him and make the whole procedure go more smoothly.

Place the towel in his crate; the familiar scent will help him relax in his new home.

When you bring your new puppy home, let him explore outside long enough to relieve himself, praise him after he finishes and then take him inside.

While he's still on a leash, let him investigate his new home, including his crate.

When he seems to tire and is ready for a nap, place him in the crate, latch the door and walk away.

He may protest at first but that is not caused by the crate, but by his learning to accept the controls of his new environment. In most cases he will calm down and cuddle up to his towel for a nap.

If you have an untrained pup, tie the door open with a bungee cord until it’s time for bed. Then close the door, latch it, and go to bed.

Depending on how your puppy was raised, he may settle down and that will be the end of it till morning.

Naturally, that only happens in a perfect world. He may fuss or cry but should settle down. If he doesn’t, after a half hour, check on him.

A heating pad placed under the crate to one side (be careful not to let the crate sit on the cord; thread it through the wires) and a dog toy with a heartbeat can help him relax.

Hot water bottles are ok but turn cold after a while and if puppy chews on it in the morning you will have a mess when you get up.

Let him sleep but when he wakes be ready to move.

This is the first lesson in housebreaking.

As soon as your puppy is on his feet, pick him up and take him outside. Puppies urinate after play, naps and after they eat. Always pick him up. If you let him walk to the door he’ll go before you get outside.

As previously eluded to when you do get up your first job is to get puppy out of his crate and carry him outside.

Don’t wait and don’t stop to clean anything up.

After he has done his business, praise him as always, and then you can clean up his crate if needed.

The number one rule in housebreaking is: You must catch your dog in the act to issue a reprimand. Never, never, never punish after the fact.

Reason: Your dog associates the reprimand with the last thing he did. When you come home, your dog comes to greet you.

If there is a mess and you show your anger he will associate it with his greeting.

Never take him to the spot to “show” him what he did because he has no idea what you’re talking about. He only knows you are mad. Instead, clean up the mess and move on.

This rule applies to all dog training; you must catch him digging in the flower bed, playing in the trash or chewing your shoes.

If you do happen to catch him doing something, a sharp “NO!” is all that is needed.

When done correctly his world will come to a screeching halt. If he needs to relieve himself, pick him up and take him outside. When you put him down, praise him, then let him wander around until he does his business, and then praise him again.

If he has been chewing on something he shouldn’t, take the object away and give him one of his own toys to chew on. 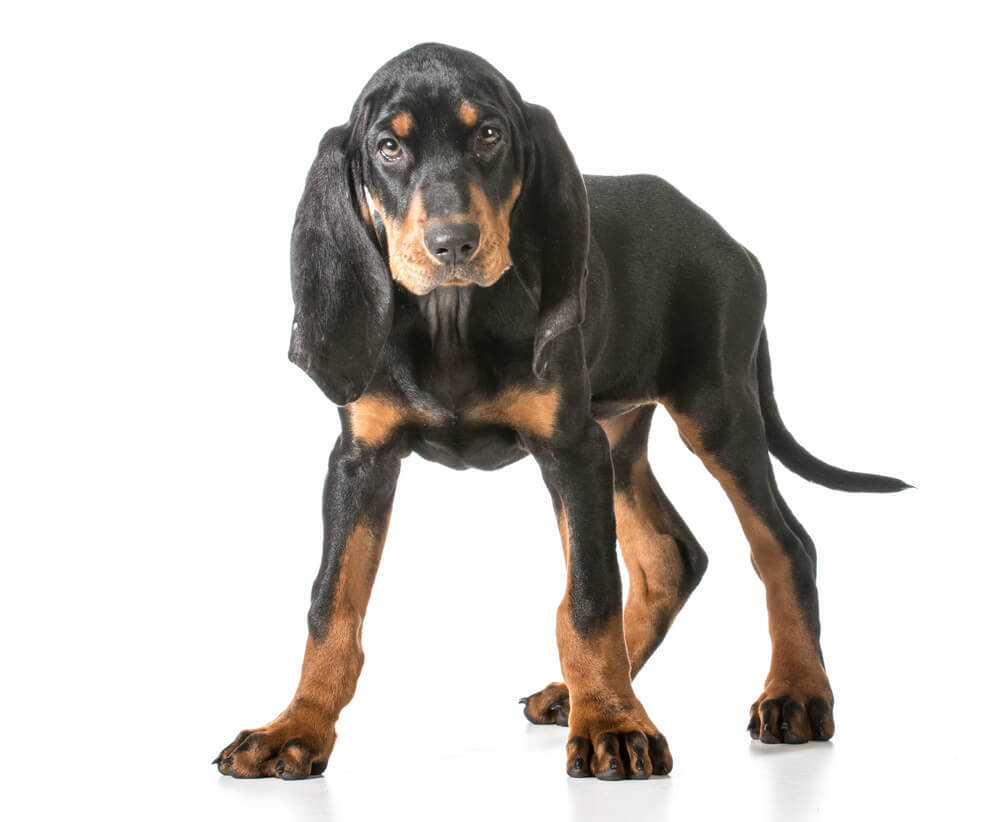 Think of your puppy as a new baby in the house, which he is.

His crate is his playpen (safe place) and it is used only when you can’t be there with him, or you have things to do and cannot be as watchful as you should with a new pup.

Get in the habit of saying “crate” when it’s time to go there and use the word ”no” when you catch your pup in the act of doing something he shouldn’t.

And always, always praise him when he does good, even when he stops after a “no” command.

How long you crate your puppy depends on you, your work schedule and your dog. For periods when he is in the crate alone, make sure he is plenty occupied.

A typical crate training period is about 6-7 hours a day including night time.

It’s okay to try different puppy crate schedules until you find the one that suits your lifestyle, the above are just guidelines to help you get started.

7. What Not To Do When Crate Training Your Puppy

Never give him something of yours (old socks, shoes, etc.) to chew on. Even though you may have washed the socks, he can still smell you on them and will not be able to tell the difference between new and old.

Or, new and discarded shoes.

Take your pup outside after a nap, after playing and after meals. If you see him looking around sniffing the floor he is most likely looking for a place to go.

If your pup does have an accident, clean the spot and use a deodorizer such as Natures Miracle (Amazon link) or Simple Solution (Amazon link). Soap and water does not kill the bacteria that remains and causes the odor that attracts your pup to the same spot.

Use a crate if possible when you take your dog with you in the car. Never leave a dog in a car in hot weather; leave him home.

Hotels and Motels will not allow dogs without a crate so if you travel, early crate training is a must.

And lastly, never use the crate to punish your pup and never after the fact. If you do not catch him, forget it. Clean up the mess and move on.

Once your pup learns the rules of the road you will find him using the crate on his own and life will become much easier for everyone.

A wide variety of sturdy dog crates, doggy playpens﻿﻿﻿﻿﻿ and dog kennels can be found at Amazon.

Don’t forget, there are many great crate alternatives for owners to help section off various parts of the house while still crate-training a puppy. Alternatives such as exercise pens and indoor dog gates can offer your pup a wider space than in a crate.

If you're still struggling with crate training your puppy, there are two online video based training courses that we recommend.

The Doggy Dan course is a behavioral training course that uses a mixture of ‘correction-style' training with aspects of positive, no-force methods, tackling behavioral issues like separation anxiety, excessive barking, pulling on the leash, fears, puppy training and hyperactivity in creative ways that work.

The Brain Training for Dogs  was developed by a former Karen Pryor Academy graduate and uses 21 brain training activities that are fun and exciting to play for canine brain development and behavior training.