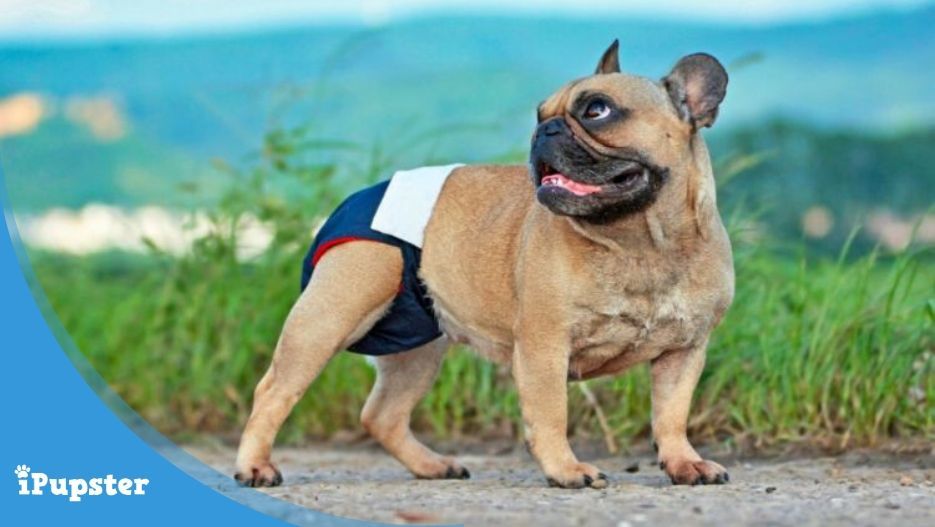 When you think of diapers, you probably picture babies, but diapers aren’t just for human babies; they can be helpful for four-legged babies, too.

Whether you have a puppy that is having a difficult time getting the hang of house training or your senior dog has developed incontinence, dog diapers can come in handy.

It may sound (and look) silly, but putting a diaper on your pooch can save you from cleaning up endless wet spots, prevent your floors from being damaged, and may help your dog avoid unnecessary stress.

There are plenty of ready-made doggie diapers on the market, but they can be pretty pricey. Fortunately, there’s a way that you can combat the mess without spending a fortune.

How? By making DIY dog diapers.

Interested in trying your hand at making a homemade dog diaper?

In this guide, you’ll find a collection of blueprints for easy to make, effective, and reusable canine diapers.

All you need are some basic supplies (fabric, yarn, a sewing machine, or even just a needle and thread) and you stitch up a own collection of diapers for your four-legged family member.

Reasons to Use a Dog Diaper 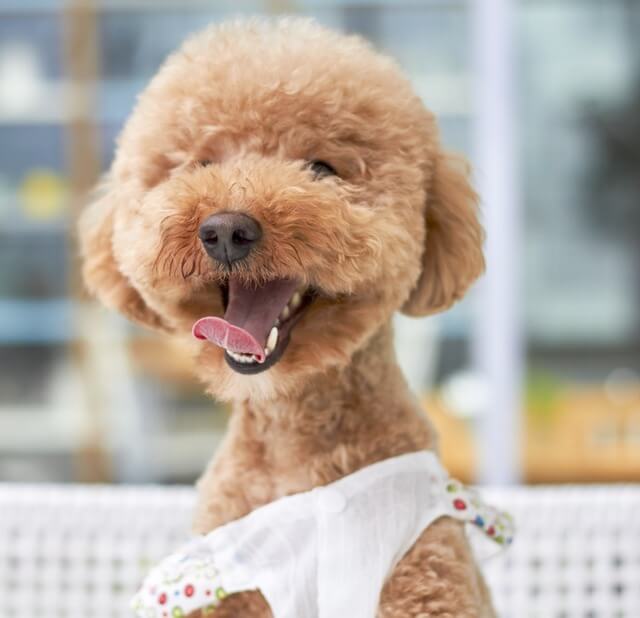 Anyone else have a dog with a leaky booty?

Before we dive in and share instructions for DIY dog diapers, let’s take a look at some of the reasons why you might need to make and use them; after all, putting a pup in diapers does sound a little strange.

Believe it or not, however, there are some really good reasons to diaper up your pooch. If any of the following situations apply to you and your furry friend, you should definitely consider making up your own doggie diapers.

Whatever your particular situation will be, there’s no doubt about it, dog diapers can be super handy.

Benefits of Making Your Own DIY Doggie Diapers 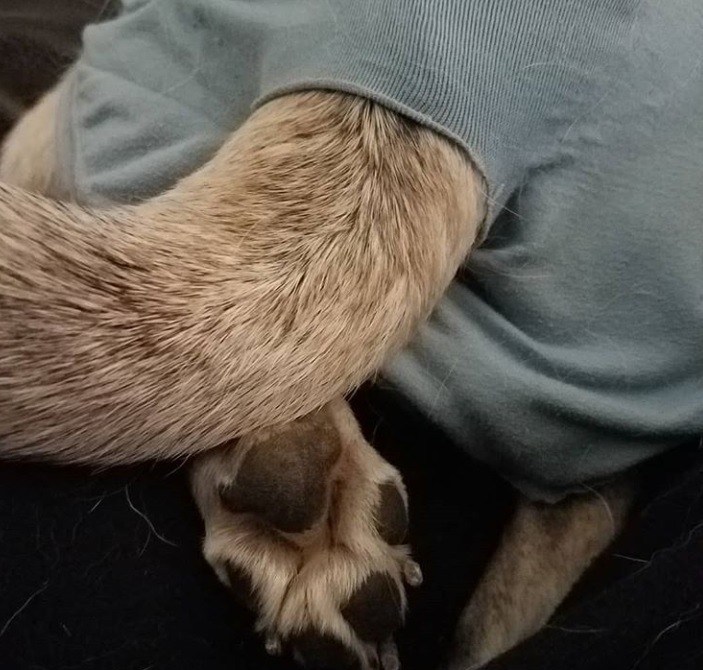 As we mentioned, you can easily purchase ready-made diapers for your pooch. Just visit any pet store or retailer that sells pet products and you’ll find an endless supply of options to choose from.

But why should you forego already made diapers and make your own instead?

Here’s a look at some very compelling reasons to give DIY dog diapers a try: 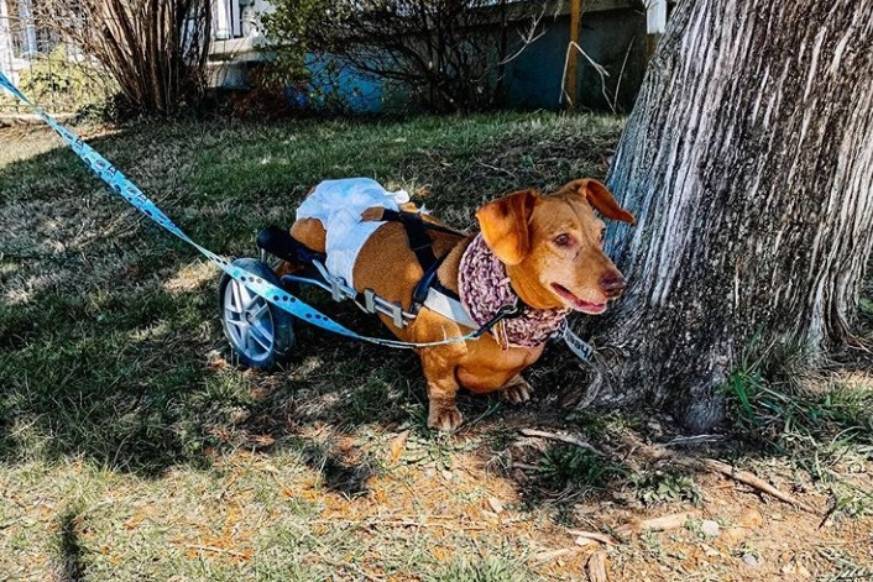 Just like diapers for babies, there are two different types of DIY diapers for dogs: disposable and reusable. Obviously, both are intended to hold urine and feces, but let’s take a look at how they differ.

As the name suggests, disposable DIY dog diapers are meant to be disposed of. They’re meant for one-time use only.

In other words, once your pooch wears one of these diapers, you take it off and trash it, even if he hasn’t urinated or soiled the diaper (use the same diaper twice and there’s a chance your furry friend could develop a bladder infection).

The benefit of disposable DIY dog diapers is simplicity.

If you don’t have the time to constantly wash Fido’s diapers – or you just don’t want to be bothered with the hassle – this type of DIY diaper is the right choice for you and your pooch.

Disposable dog diapers are not biodegradable, so when they wind up in landfills, that's exactly where they stay!

These diapers are made of fabric and can be reused several times (hence why they’re called “reusable”). Once your pooch wets or soils the diaper, immediately remove it and clean it.

You can toss it in the washing machine or hand wash; whichever option works better for you.

Also note that, like with disposable diapers, you should wash the reusable variety every time you take it off your pup, even if he or she hasn’t dirtied it, as this will help to avoid infection.

The primary advantage of using DIY reusable dog diapers is that you don’t have to constantly refresh your stock like you would have to with disposable diapers.

Plus, there are some super cute fabrics out there that you can make into diapers, giving your pup an “edge” on fashion.

Not to mention the positive impact you'll make to the environment!

When it comes to DIY doggie diapers, the simpler, the better; you don’t want a complex design that’s difficult to put on and take off. Additionally, you don’t want to spend a fortune to make it.

With that said, consider the information presented above, as well as your specific needs to determine which design will work for best for you and your pooch.

So, without further ado, we present to you a collection of our favorite DIY dog diaper designs.

If you’ve decided that disposable DIY diapers are the right option for you and your furry family member, this design is pretty easy to make. All you have to do is modify disposable baby diapers so that they can be used for your pooch.

Here’s what you’ll need and a quick video on how to make a dog diaper from a baby diaper:

Place the diaper over your pup’s hindquarters to pinpoint where the tail will be; mark the spot on the diaper.

Next, measure the circumference of the base of your pup’s tail.

Using that measurement, cut a hole in the back of the diaper where your dog’s tail will be positioned.

Once the hole is cut, you just slip the diaper on your pup so that it’s cover his or her midsection, place his tail through the hole, and furry friend will be ready to go!

This design is basically the same as the previously mentioned DIY dog diaper, but instead of using disposable baby diapers, it involves using reusable or cloth baby diapers.

With this design, you’ll save more money because you won’t have to constantly refresh your supply, as you can wash the diapers and use them over and over again.

Place the diaper over your pup’s hindquarters to pinpoint where the tail will be; mark the spot on the diaper.

Using the measurement of the circumference of the base of your dog’s tail to cut a hole in the diaper where his or her tail will be positioned.

After the hole is cut, the diaper will be ready to use. Place it on your four-legged family member so that it covers his or her midsection.

This design involves turning dog pads (the type you’d put on the floor when your pup is house training) into disposable DIY dog diapers. Dog pads are specifically designed to absorb liquids, so they can work well as diapers.

This design is would work particularly well for larger dogs, as they’re bigger than human baby diapers.

Here's how to make a dog diaper out of a pee pad.

Mark out an hourglass pattern on the wee-wee pad that’s large enough to cover your dog’s midsection and rear end.

Cut out the hourglass shape.

Place the makeshift wee-wee pad on your pup.

Use tape to secure it in place. Take care to avoid placing the tape on your pup’s skin or fur.

If your pup is small, you can use a sock to make a DIY reusable diaper. This option shared on Imgur is easy, affordable, and relatively effective.

Here's how to make a dog diaper out of a sock: 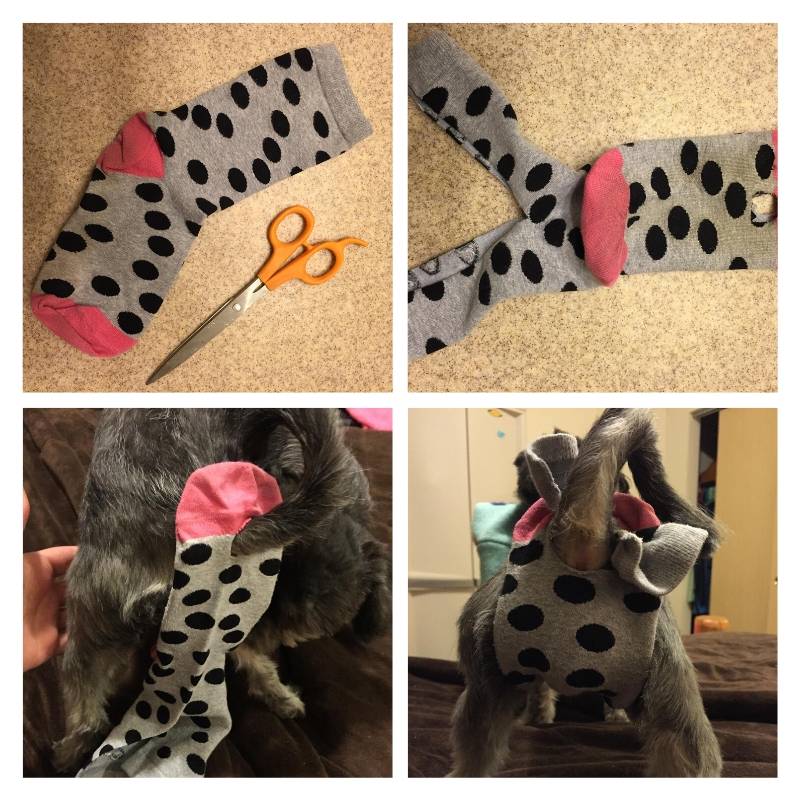 Cut a hole in the bottom and the top of the sock, about an inch from the toe.

Cut the ankle part of the sock so that it’s almost cut down to the heel.

Place the hole over your dog’s tail and tug both sides of the opened ankle section of the sock around the hind legs.

Adjust the sock so that it’s providing proper coverage over your pup’s bits.

Tie both sides of the sock. You want it to be securely tied, but loose enough so that you can fit two fingers underneath the sock.

Place a sanitary pad between the sock and your dog’s bits to provide some absorption.

Originally WikiHow's concept for a baby diaper, Pop Your Dog used the concept for a dog diaper. Using an old T-shirt to make a homemade reusable diaper for your pooch. No sewing is required, which is definitely a bonus.

Here's what you'll need and how to make a dog diaper out of a t shirt: 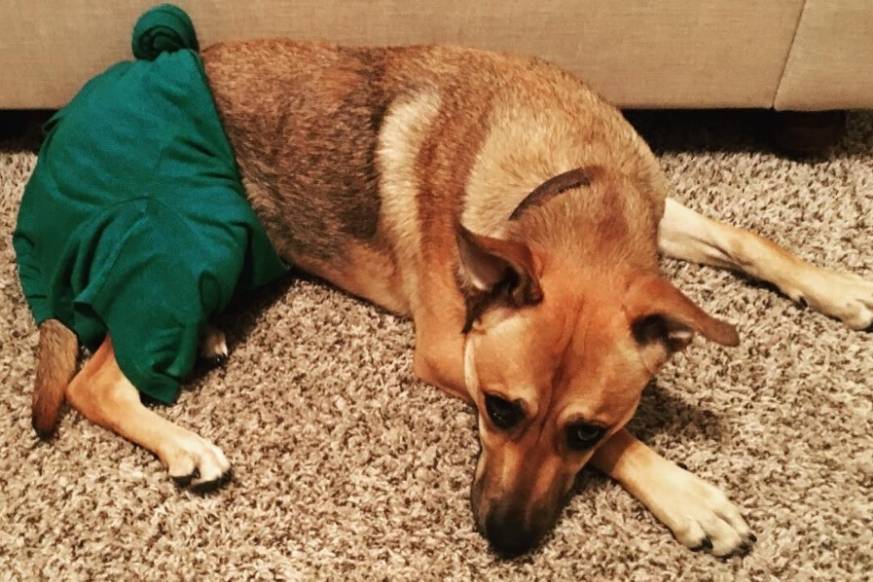 Lay the shirt out flat on a stable surface.

Fold one side of the shirt and line up the seam of the sleeve with the middle of the color.

Fold over the opposite side of the shirt in the same manner.

Fold down the top portion of the shirt so that it creates the shape of a “T”.

Put a sanitary pad between your pup’s bits and the T-shirt.

Tie the T-shirt to secure it in place; make sure there’s enough space to fit two fingers underneath it.

Use an old towel to make a DIY reusable diaper for your pup.

Here's what you'll need and how to make a dog diaper from a towel: 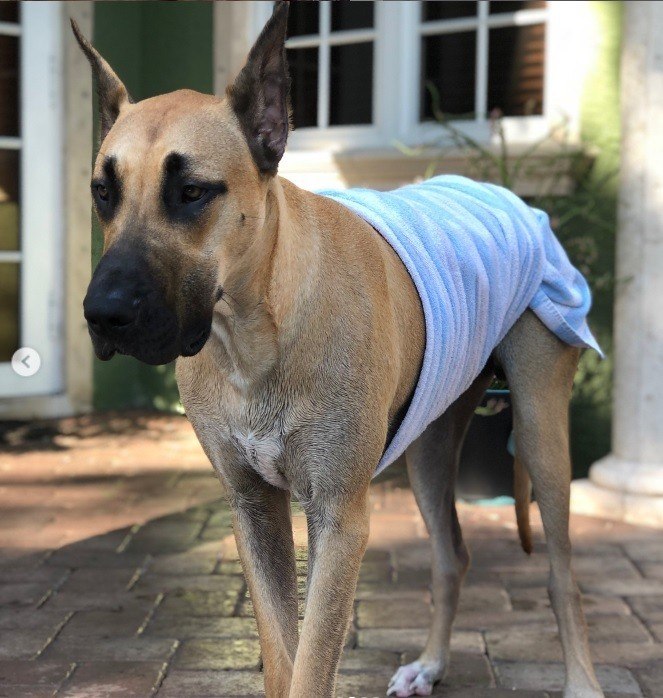 Cut the towel in an hourglass shape that will fit your pooch.

Determine where your pup’s tail will be placed in the towel.

Cut a hole that’s the same size as the circumference of your dog’s tail in the portion of the towel where his tail will be positioned.

Place the towel on your dog, using diaper pins to secure it in place.

Position a sanitary pad between your pup’s bits and the towel.

If your furry family member has been having issues with accidents in the house, give one of these simple, low-cost DIY doggie diapers a try.

You can save yourself a lot of headaches, and your pooch a lot of grief!

Just remember, whichever design you choose, make sure that you properly clean the diaper and your dog after each use. 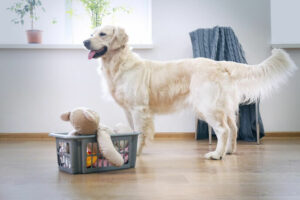 Dog DIY, For The Home 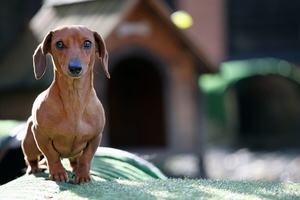 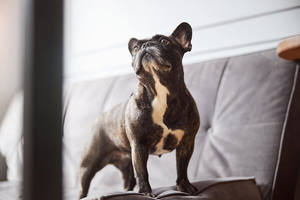