You already know that your pup is smart. And like any smart kid - in this case albeit a fur kid - she needs to exercise her brain. A dog whose intellect isn't challenged and developed enough becomes a very bored dog, and bored dogs are often destructive, depressed or both.

Interactive dog toys are a great way to keep your pup's brain in shape, but no doubt you, like so many other pup parents, have a small mountain of semi-deceased dog toys someplace around your home, and if you are the human guardian of a dog who really loves to chew you may have given up buying expensive interactive dog toys long ago, as they barely last an hour in your home.

For this reason - and many others - the idea of taking a hands-on approach to canine enrichment in your own home via DIY puzzle toys for dogs is an appealing one. With a few simple supplies - some of which may only have ended up in the garbage - a little time and patience and some great guides and inspiration you can make your own interactive toys for dogs.

Not only will making your own puzzle toys for your dog save you a little cash but you won't feel quite so bad if they are quickly dispatched by your loves to play pup.

To help you get started here we're going to take a look at some great homemade dog toys you can make yourself as well as some very good reasons doing so will be great for her.

What Interactive Dog Toys Do For Your Pup? 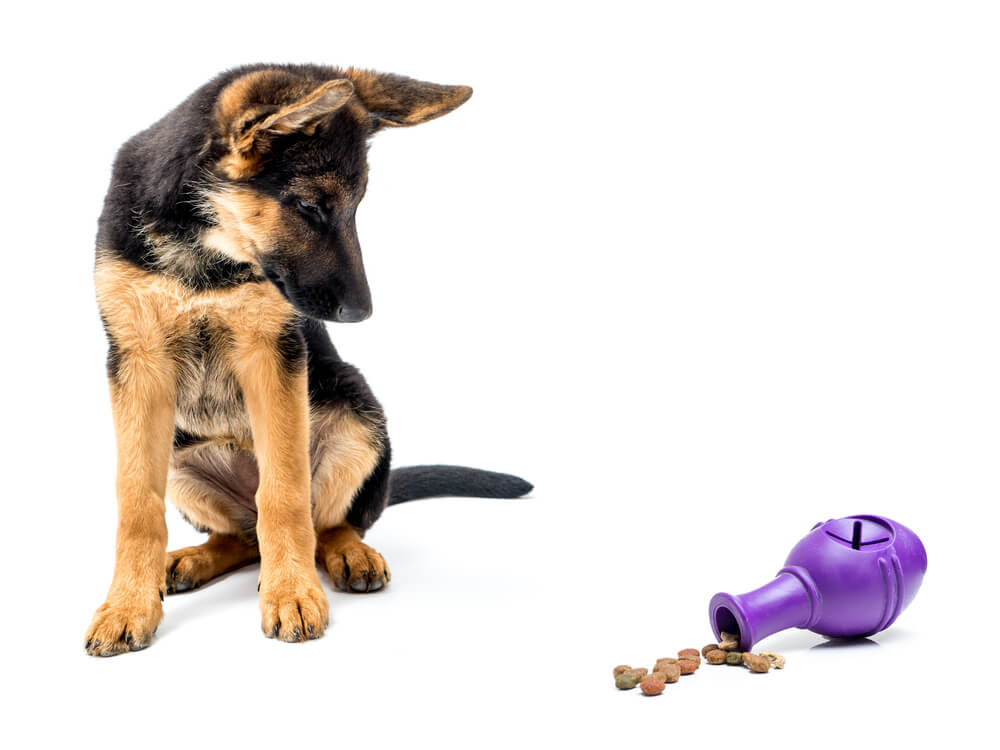 As we mentioned, if they are not stimulated a bored dog can become a troubled pup very quickly. And with the best will in the world, and as much as they might love it, you can't spend all day every day playing with them yourself.

In addition, learning to play with their own toys is great for your pup in terms of their cognitive development, just like it is for your human kids.

Another reason to make your own interactive dog toys that is very beneficial for them is that you can tailor it to their unique size and needs.

Making your own toys for your pup allows you to make a toy especially for them, right down to the sizing.

How To Make DIY Dog Diapers

Now that you know why making your dog their own homemade interactive dog toys can be such good idea it's time to look at what you can make and how it's done.

Here are just 10 great ideas to get you started.

The one thing that we all have in our homes on a regular basis is toilet roll tubes. And just as you might use them in a human kid's craft project, they can also be used to make easy, disposable and safely destructible dog toys.

Making these interactive dog toys can be as simple as you want to make it.

Need something to amuse your pup fast while you head onto an important Zoom call? Spread peanut butter around the insides of a toilet roll tube.

They'll have to figure out how to get as much of the yummy stuff as they can without squishing the tube flat, which should be a challenge that keeps them busy at least for the duration of your meeting.

For a harder challenge fill the tube with peanut butter -or even low sugar, low fat ice cream - and freeze it for a couple of hours.

If your pup has mastered the toilet roll tube challenge, or gets through them a little too quickly, there are many other ways you can make use of boxes that were headed to the garbage anyway and turn them into fun dog toys. Want something simple?

Take an empty cereal box, add some of your pup's favorite treats to it, tape it up, watch her keep herself occupied for quite a while.

Perhaps, but cardboard cleans up fast and the challenge of solving the 'box thing' will be one all pups should enjoy.

Just watch Roger in the video below, and see how much this can be for pups (and you too).

How many old t-shirts do you have (and does the rest of the family have) that have seen better days and really should have been tossed a long time ago?

If you are like us, more than a few.

But before you so throw them away, consider turning them into an easy to make, easy to toss t shirt rope for your pup instead.

This news report from Channel 9 news in Colorado offers a great visual for your if you need one.

Lots of pups like toys that make crinkle sounds, but store-bought versions are often flimsy and don’t last for long. Our DIY version, which makes use of a used water bottle and an old sock, will not only keep your pup engaged for quite a while but will give new life to stuff that was heading to the garbage anyway.

To make this simple, but fun, interactive toy for dogs simply remove the cap from any 12-16 oz plastic water bottle, stuff it in an old sock (one of the many that lost its mate long ago if your house is anything like ours) , tie of the end of the sock and voila! A simple, but fascinating crinkle toy for your pup to puzzle over while you get on with doing something else.

Want to add an extra twist in the summer to help cool your pup off and keep her happy?

Freeze a bottle of water and add that to a sock instead of an empty one (although this is best as an outside game, unless you don’t mind a very wet floor!)

Here’s the toy in action, as demonstrated by Borrow My Doggy.

This DIY interactive dog toy is best for small pups as larger ones will certainly make very short work of it, but to stimulate a tiny dog’s brain it’s great.

Again, this is very simple. Here’s how it’s done:

Here’s another visual tool for those who prefer one, this one a video tutorial on how to make this easy interactive dog toy from Dog Training by Kikopup.

Dogs love to play with tennis balls. But what if you make them work even harder to get to that ball than it is if you just toss it to them?

Again, this is simple to make, easy to set up and a great way to keep your pup amused if you need to go do something else for a while. All you need is a standard muffin tin and some tennis balls (and some treats). It so happens that muffin tin cups are also perfect tennis ball holders.

All you need to do to make this fun toy is place a treat in each muffin cup, place a tennis ball on top of each treat, set the tray on the floor and let you fur kid paw and bite until they can ‘free’ all those yummy treats and fun looking balls from their ‘prison’.

Watch how much fun Callie from Cold Nose College has playing this game:

Pantyhose don’t have a long life, but you can give them a use after they snag or ladder and become unwearable by turning them into a panty hose snake dog toy for your pup.

Watch your pup have fun tossing, chewing and pawing at their new ‘friend’. Larger dogs may liberate the tennis ball quite quickly, but that’s OK, as this is a super inexpensive toy to replace with a new version (unlike those pricey dog toy snakes from the store!)

Here's a visual courtesy of Bark, Scratch and Sniff. 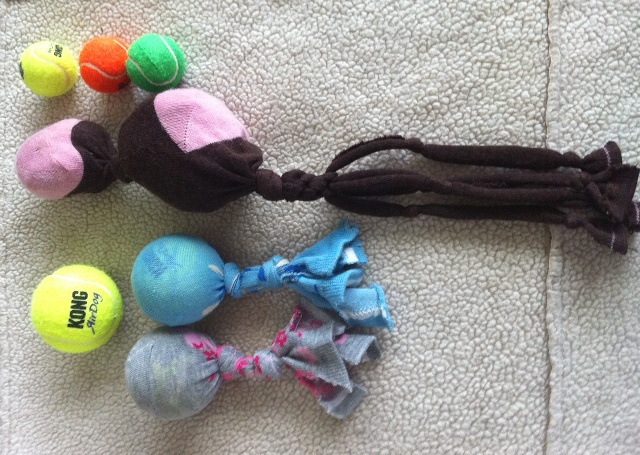 The hot summer sun can be hard for pups, but they naturally want to be in on the action if the rest of the family is having fun outdoors. And they can, if they stay hydrated and there’s some shade to retreat to when they need to.

If your pup has lots of small toys she likes to take outside, you can make them even more fun if you turn a few of them into a dog toy popsicle.

Here's a visual from Looney Luna over at StarvingChefBlog. 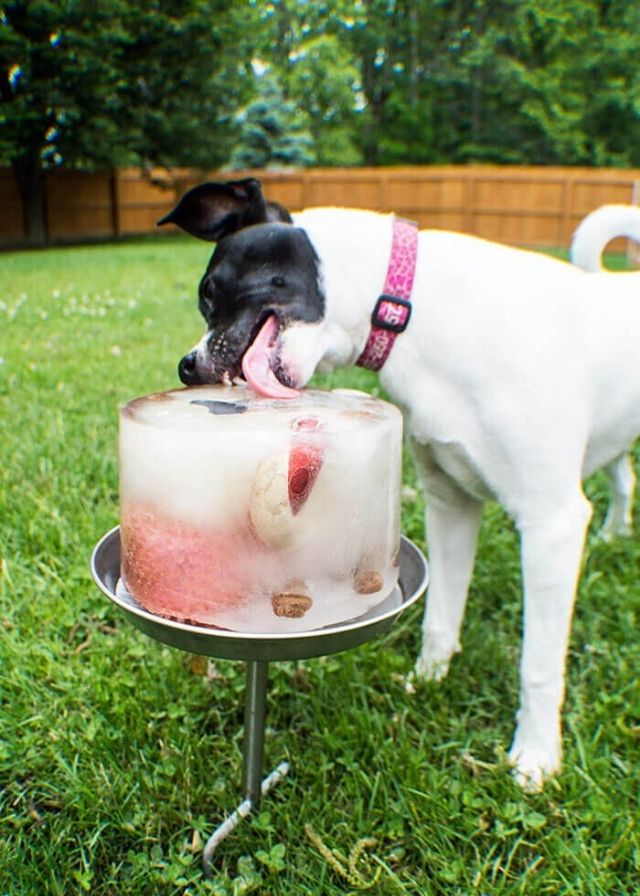 Here's what else you can ask your human to add to the bucket to make it more fun:

How To Make A DIY Dog Wheelchair

This DIY dog toy should keep even an avid chewer occupied for at least a while.

All you need to do is take an old, thicker bath towel – either one you have lying around or that can be found for less than a buck at a flea market or even a dollar store, roll it up and tie a big knot at one end.

Doing so creates and instant chew toy/tug toy that should keep pups amused for a while and that can be taken almost anywhere with ease! 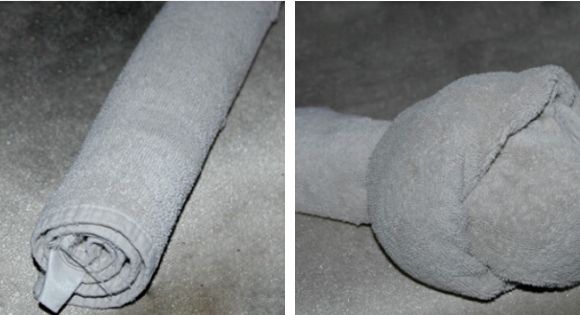 An empty milk bottle will keep lots of pups happy, especially as they can pick it up and run with it. It can be thrown, tossed and gnawed on and the cost to you will be zero cents, as you already got your money’s worth out of that nice healthy milk for the rest of the family.

Just keep an eye on heavy chewers, so they don’t eat the milk bottle instead of playing with it! 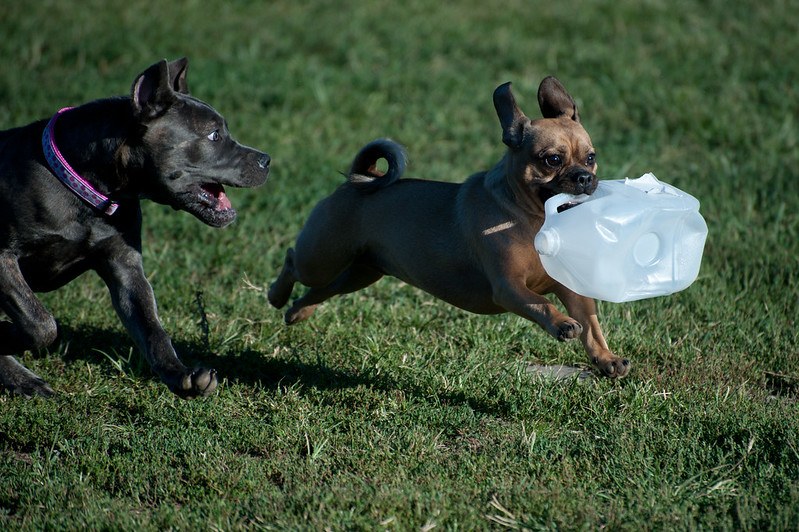