Choosing a name for your dog is no small thing. Some people will pick a name that suits the dog's personality, where others will name them after something tor someone they love.

While it's easy enough to name a fluffy Pomeranian something cute, how do you find a name for those tougher looking dog breeds, like German Shepherds, Rottweilers, Dobermans, Bulldogs, and American Pit Bull Terriers? We have a list of 95 tough dog names to help get you started!

After going through many lists of tough dog names, we found the top 10 that people choose for their tough dog, along with their meanings. 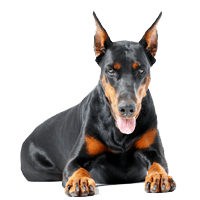 If you are looking for tough girl dog names, you can find some inspiration below for some tough sounding female dog names.

What’s great about tough dog breeds is the variety of names you can choose from. Here is some inspiration for tough sounding dog names for males.

If you haven’t found something intriguing in the categories above, perhaps a leadership inspired name from history will do. Many owners choose the name of a strong leader in history as a name for their tough dog. Here are some of the popular ones:

If mythology is something you have an interest in, there are many names to choose from for a tough dog breed. Here are our examples of the top 10 Greek mythology gods/ruler names.

There is an endless supply of tough dog names that you can use from heroes and villains from movies. Here is some of the most popular movie character dog names:

For those of you who are sports fans and are looking for some tough dog names for your new furry family member, here are a few to try:

There are also a number of sports-related terms that can make some good tough dog names:

9 of the Toughest Dog Breeds

Now that we have a list of tough dog names, I thought we would take a look at the 9 toughest dog breeds that tend to get these names. Many of these breeds are bought for protection of the home, family, or business.

Let's see what those breeds are!

The German Shepherd tends to be the top choice for law enforcement, security, and any other field where a powerful and strong dog is needed. Originating in Germany, this is one of the top purebred dogs in the U.S.

Huskies are an old breed that became well-known during 1925 for a 258 mile trip through Alaska. A group of huskies, led by Leonhard Seppala, was used to deliver a life-saving treatment for an epidemic of diphtheria in just under 6 days. Huskies are known for their bravery, love and protection of the family, ability to pull large amounts of weight, and their ability to cover extremely large distances, in even the harshest conditions.

Many people are afraid of Rottweilers because they have been bred as attack dogs, with a few other breeds. But this isn't really in their nature. They were bred as working dogs for centuries. From the time of the ancient Roman empire, this breed was used for guarding and herding livestock. They have a powerful look to them, which is why many are used as guard and police dogs. They do have a playful side too.

Is Rottweiler Insurance Cover Worth the Cost?

Similar to the Siberian Husky, this smaller version has an even stronger and more muscular physique. They were used by Western Alaska's Inuit tribes for hunting and hauling freight through deep snow. They have a mischievous and independent nature and need a lot of exercising.

Also referred to as gentle giants, these dogs tower above others. They were used for bear, deer, and boar hunting originally. They can weigh up to 175 pounds and are all muscle. They are very gentle dogs though who adore their families.

Another breed that is often used in law enforcement and as guard dogs, Dobermans are very powerful animals. They originated from Germany and have a very elegant look to them. They are also extremely fast and considered to be one of the world's strongest breed of dog.

This muscular, big-boned breed is not only strong but can also swim long-distances. This is partly down to having webbing between their toes. Newfoundlands are good-natured dogs and devoted to their families, making them a good dog for protection.

Saint Bernards originate in Switzerland and are trained for saving and rescuing those who have been lost in avalanches. They can dig through a massive amount of snow and drag those in danger to safety. These dogs are incredibly loyal and rely on their brute strength, toughness in harsh conditions, and are quite affectionate.

The Mastiff breed is believed to go as far back as Caesar and was bred as hunters, guardians, and war dogs. They can weigh more than a grown man and have thick muscles all over their bodies, giving them an incredible amount of strength. They are also kind and patient when trained in a positive way.

Last word of advice on dog names, try not to give your puppy nicknames...

They may learn to respond to these but it can get confusing to them and be less effective over time.