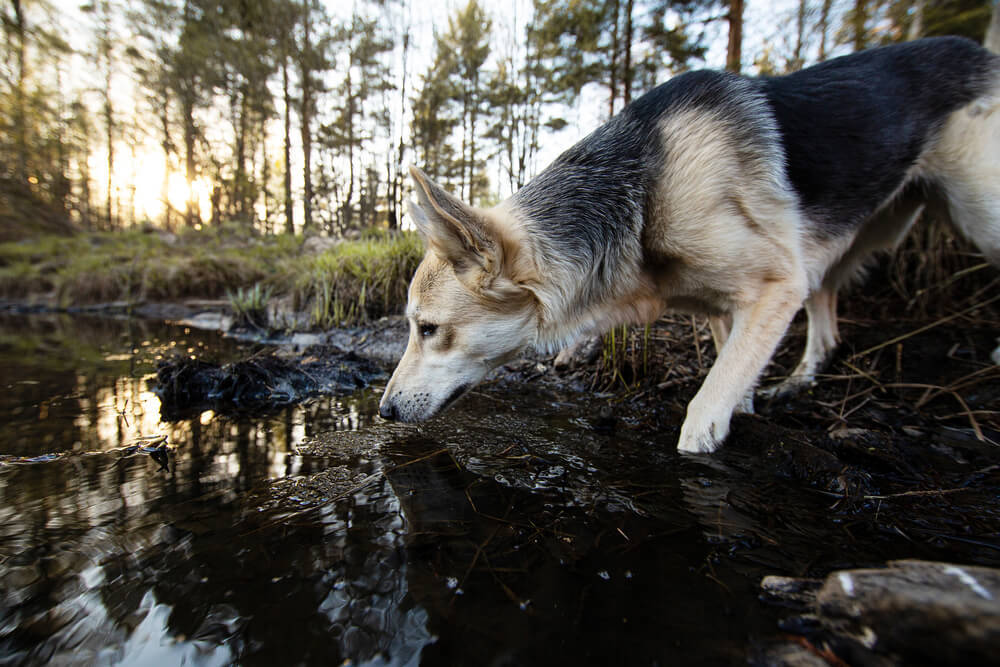 What Causes Giardia in Dogs? [Symptoms and Treatments]

When your puppy or dog has diarrhea, it’s unpleasant and alarming. Frequent diarrhea is usually a symptom of an underlying health problem and can lead to serious issues like dehydration.

The problem is, there are numerous reasons for diarrhea in dogs including dietary changes, irritable bowel disease, and allergic reactions. This makes diagnosing the root cause a complicated guessing game for dog owners.

Giardia in dogs is one common infection that is known to cause canine diarrhea. As many as 50% of puppies and 100% of dogs housed in kennels contract Giardia at some point.

What is Giardia in Dogs?

Giardia (pronounced jee-ahr-dee-uh) is a single-celled (protozoan) parasite that can result in an infection of the intestines called Giardiasis, also referred to as "beaver fever".

This infection happens when Giardia cells attach themselves to inside of the small intestine, absorb nutrients, and multiply via asexual reproduction.

What Causes Giardia in Dogs?

Dogs contract Giardia when they ingest infectious cysts found in other animals’ feces.

Water contamination is the number #1 cause of Giardiasis because cysts thrive in moist environments.

What are the Symptoms of Giardia in Dogs?

Some of the main symptoms of Giardia that dog owners can observe include:

❌ Soft, pale feces with the appearance of fat or mucous

Problems like weight loss and poor coat appearance are caused by malabsorption of nutrients in your dog’s diet. Dogs with Giardia may also have microscopic intestinal lesions.

In severe cases, untreated Giardia can result in death which is why diagnosis and treatment is vital. Giardia can be especially problematic in puppies, elderly dogs, and dogs with compromised immune systems.

Can My Dog have Giardia Without Symptoms?

Not all dogs who have the Giardia parasite show symptoms or develop an infection that needs to be treated.

How to Test for Giardia in Dogs?

Diagnosing Giardia is a tricky process.

Jennifer Coates, a Doctor of Veterinary Medicine, shared an in-depth look at her process for diagnosing Giardia with PetMD. In her article, she outlined the challenges that can arise when diagnosing the condition in cats and dogs.

According to Coates, diagnosing a suspected case of Giardia starts with a microscopic fecal exam. These tests are simple and inexpensive, but because the parasite only sheds intermittently (meaning not every poop your dog has will contain infectious Giardia cysts), it may take several samples to make an accurate diagnosis.

Studying only one sample often leads to false negatives.

If fecal exams are negative but Giardia is still suspected, the next diagnostic test that is performed is a Fecal Enzyme-Linked Immunosorbent Assay (ELISA). This test results in fewer false negatives and can be performed as a rapid snap test or sent to a lab for testing.

Coates only does this test for dogs who are showing symptoms and most likely have a Giardiasis infection, because some dogs with Giardia don’t need treatment. Overuse of this test in asymptomatic cases could mean treating the wrong problem if a dog’s diarrhea is caused by something else.

That’s where a dog’s history comes into play when making an accurate diagnosis. An older dog that has minimal contact with other dogs is less likely to have contracted Giardia. A puppy who was just purchased from a pet store or adopted from a shelter would be considered higher risk.

How to Treat Giardia in Dogs?

Three medications most prescribed to treat Giardia in dogs are fenbendazole, metronidazole, and panacur. In cases that are resistant to these treatments, sometimes combinations of medications are used.

Fenbendazole is generally prescribed for three to five days and is very safe, even for pregnant and lactating animals. It is most effective for cases where there is a clear Giardia diagnosis.

For cases that are not as clear, where diarrhea might be due to another underlying issue, metronidazole (Chewy link) can be prescribed for five to ten days. This medication is anti-inflammatory and gets rid of Giardia as well as other bacteria that can cause diarrhea.

Panacur (Amazon link) (also known as fenbendazole) is an over-the-counter intestinal de-wormer that can be effective in treating giardia when medications like the previous two are ineffective.

Can a Dog with Giardia be around other Dogs?

Your dog with Giardia should be kept separate from other dogs until they are better.

Since Giardia is highly contagious, this also means putting off trips to the dog park, doggy daycare, and play dates with other pups.

How Long does Giardia Last in Dogs?

It can take up two weeks to eliminate giardia in dogs when treatment is administered on time and correctly.

Recovery from Giardia is not usually complicated unless your dog is young, old, or has a compromised immune system.

Here are some things to keep in mind during the recovery process, as well as tips to prevent reinfection:

During recovery, your dog will likely be on an oral medication. You need to quickly pick up their poops and clean the area where your dog lives, so the space does not get contaminated.

According to Cascade Heights Veterinary Center, it’s important to:

Give your dog a bath on the first and last day of treatment. Wear gloves and pay special attention to your dog’s rectal area to make sure any infectious cysts are washed away.

These precautions will help make sure your dog does not spread the infection to other members of the house or reinfect themselves.

If all goes well, recovery from giardia can take as little as two weeks. However, treatment resistant cases may require several rounds of medication.

Natural Remedies and Things to be Aware Of

Aside from maintaining good hygiene, another thing you can do to help your dog recover from Giardia is make some minor changes to your dog’s diet.

Many dog owners attest to the effectiveness of small doses of fresh garlic (chop and let it sit for 10 minutes before serving) in addition to medication to get rid of Giardia infections.

Other recommendations from dog owners include using dog probiotics and increasing your pup’s fiber intake with ingredients like shredded carrots. 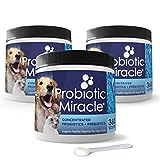 In some cases, your vet may recommend a bland diet of chicken, rice, and pumpkin or a specialty dog food for gastrointestinal issues while your dog recovers.

Five things that you can do to prevent future Giardia infections: 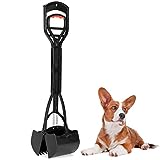 Giardia infections cannot always be prevented but changing your habits in these simple ways and maintaining good hygiene greatly reduces the chance of infection.

Can my puppy have Giardia without symptoms?

Yes. Not all puppies with Giardia develop symptoms/Giardiasis.

How long does it take for Giardia to go away in puppies?

In some cases, Giardia cases are mild and go away by themselves. If your puppy requires treatment, they may be put on medication for up to 10 days, then re-evaluated to see if the infection is gone a few weeks later.

How do I know if my puppy has Giardia?

Two main symptoms that could mean your puppy has Giardia are weight loss and diarrhea.

Is Giardia serious in puppies?

If caught early a strong and healthy puppy will bounce back from Giardia. However, if the infection is severe or left untreated a puppy with Giardia can become dehydrated and lose weight which can be fatal.

Should dogs with Giardia be quarantined?

Yes. Your dog with Giardia should be quarantined and you should clean up after them frequently.

Can a dog with Giardia be around other dogs?

A dog with Giardia should not be around other dogs because of how easily the infection spreads amongst canines.

Can I get Giardia from my dog licking me?

Be careful not to let your dog lick your face and don’t touch your face after petting your dog without washing your hands first.