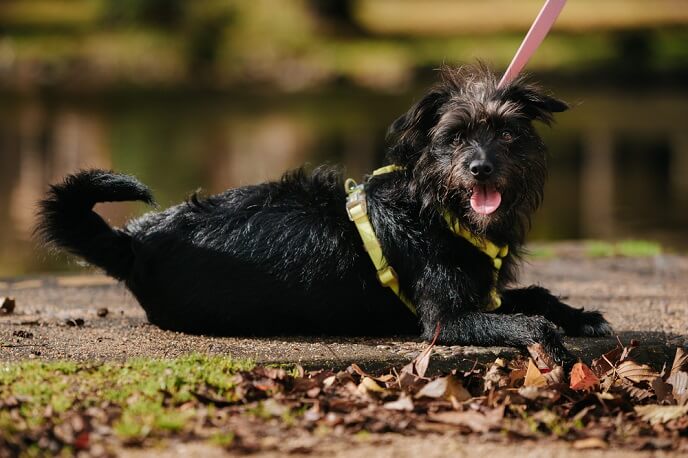 When you translate its name into English from the original German, affenpinscher roughly becomes 'monkey terrier', supposedly so called because its little face looks more than a little simian.

But it's not an insult, merely a commentary, and these cute little toy dogs have been beloved by dog fanciers for almost two centuries, first as working dogs then, these days, as pampered pets.

They have other unofficial names too: the French call Affenpinschers ~ diablotin moustachu ~, as in mustached devil, and those who enjoy the Star Wars universe think they should have an honorary place in that lore, because they often look like a cross between an Ewok and a Wookie!

Whatever you want to call them, however, they are incredibly cute and usually mischievously playful too. 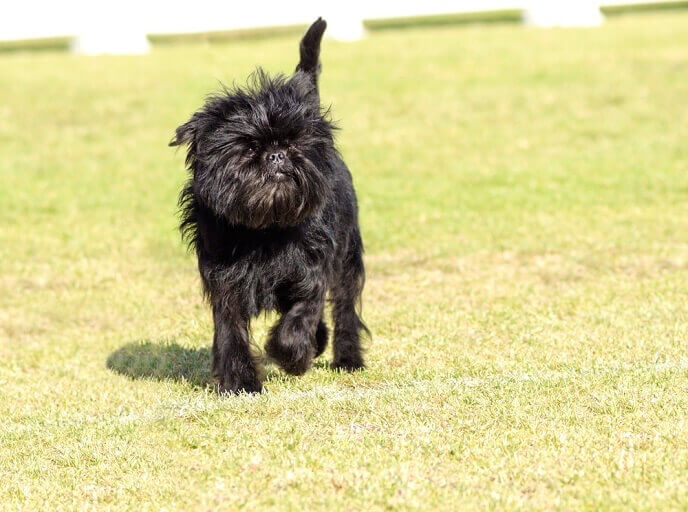 The tiny Affen is often regarded as a big dog in a small package.

Germany is where the Affenpinscher breed was first created.

Although the little, wiry dogs of this breed are seen as companions and ratters in artwork from way back in the 1500s, the breed was not mentioned in dog breeding literature until the 19th century, when they emerged as a breed exceptionally well suited to commercial ratting and were often found in warehouses working hard to keep them vermin free.

At the time, there were two types of pup mentioned in breeding circles: a larger dog with a long muzzle and a smaller dog with a round head and a short muzzle with a pronounced jaw.

Both dogs are thought to have evolved into their current names, the former as the Miniature Schnauzer and the latter as the Affenpinscher.

The majority of Affenpinscher breeding in the 1900s occurred in Saxony and Bavaria. The breed rose to fame and popularity in Europe just before World War I, but as the conflict raged, interest in dog breeding, understandably, waned for a while and fewer individuals of the type were born.

From the middle of the 1920s until World War II, Affens rose to popularity once more and began heading, with their owners, out of Europe and into the United States. However, now they traveled as companions, rather than employees!

In 1936, the Affen had become common enough in the US that it was accepted as an official breed by the AKC, belonging to the toy group.

Although some Affenpinschers are less tolerant of the high energy of children than others, they frequently get along well with kids. Due to their history as rodent hunters, Affens often do not get along with small animals, especially rodents.

Affenpinschers do shed, despite being considered a hypoallergenic breed of dog. Although rough coated Affens don't need much brushing, it is recommended that their coats be stripped frequently.

What does that mean? In the particular growth cycle of dogs with wire coats, the hair gets thicker and darker with time. Dead hair from the top coat must be removed by the root; otherwise, the coat won't appear as vibrant and healthy.

Stripping is a straightforward process that entails removing the dead, lifeless hair and leaving the lustrous, fresh hair in its place. Careful stripping significantly lowers shedding, making them even less likely to aggravate anyone's allergies.

It can be done at home, but you should have a professional groomer demonstrate the technique for you at least once before you try.

Affenpinscher mix dogs have become popular with pet parents over the past few years.

These mixes take many of the things that people love about Affens - their playfulness, their small size and their status as an almost hypoallergenic pup - and add the looks and behavioral traits of another breed.

If you are wondering whether 'mix' is just a fancier term for mutt, the answer is yes, but it's a nicer term, as mutt has grown to have a negative connotation, which in itself is unfair, as every dog is beautiful in their own way.

The term 'designer dog' is sometimes used too, as some breeders deliberately mix two dog breeds to create a 'new one'.

To be clear here, all the Affenpinscher mixes we'll talk about here are not official dog breeds. To look for one specifically will not be easy (more on that later) or even something you should really do.

With so many mixed breed dogs in shelters across the USA looking for a loving furever home, you are sure to be able to find one at your local shelter you'll fall in love with, whatever their family history might be.

However, because people love to show off their dogs there, you might have seen more than a few affen mixes showing up on social media recently. We have, and here we wanted to share some of them with you. 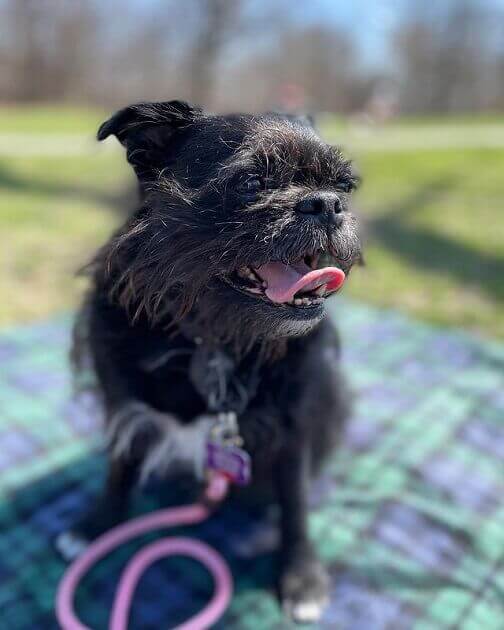 Pugs are known for their mischievous, playful natures, and for their loyalty to their family. They are usually great with kids, love attention and can be very charming around strangers, as long as they feel they don't pose a threat to their 'pack'.

As they have short legs, and short snouts, pugs are not fond of long walks or excessive heat, so for them spending lots of time indoors in an air-conditioned apartment is ideal. 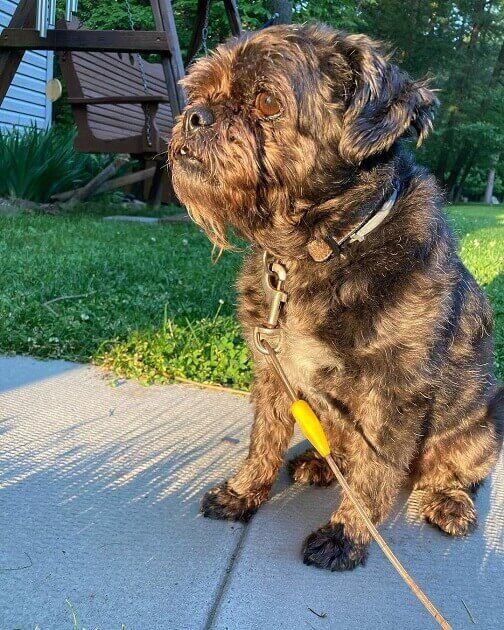 The name sounds like something out of an urban fantasy novel, and this affenpinscher mix can be feisty enough to be considered an adorable little monster.

The Griffon Bruxellois is a toy breed that originated, as its name suggests, in Belgium, and it's never been a common breed outside its home country until very recently.

Like the Affenpinscher it is a short, wiry haired pup that sheds very little and is happy at home indoors as long as someone is around to pay attention to him! 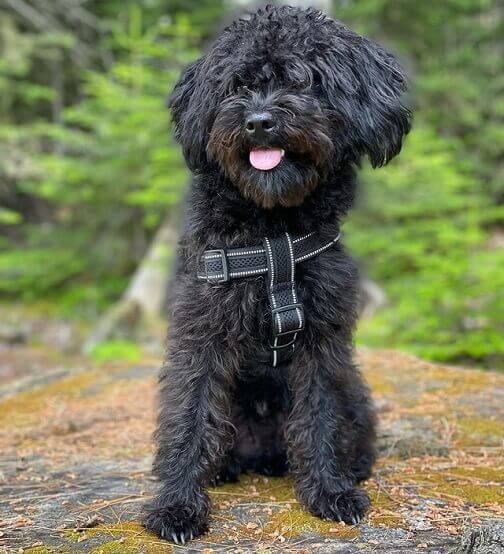 Poodles are a popular choice for mixed breed dogs, and for lots of good reasons.

These are pups who are smart, easily trained and usually quite calm. Their naturally curly coats are relatively easy to take care of, and when you combine that with an Affenpinscher's wiry short coat, you get an easy to care for coat that results in less shedding.

As less shedding= less mess and fewer allergens, these lively dogs might make great apartment dwellers for those with less living space and/or allergies. 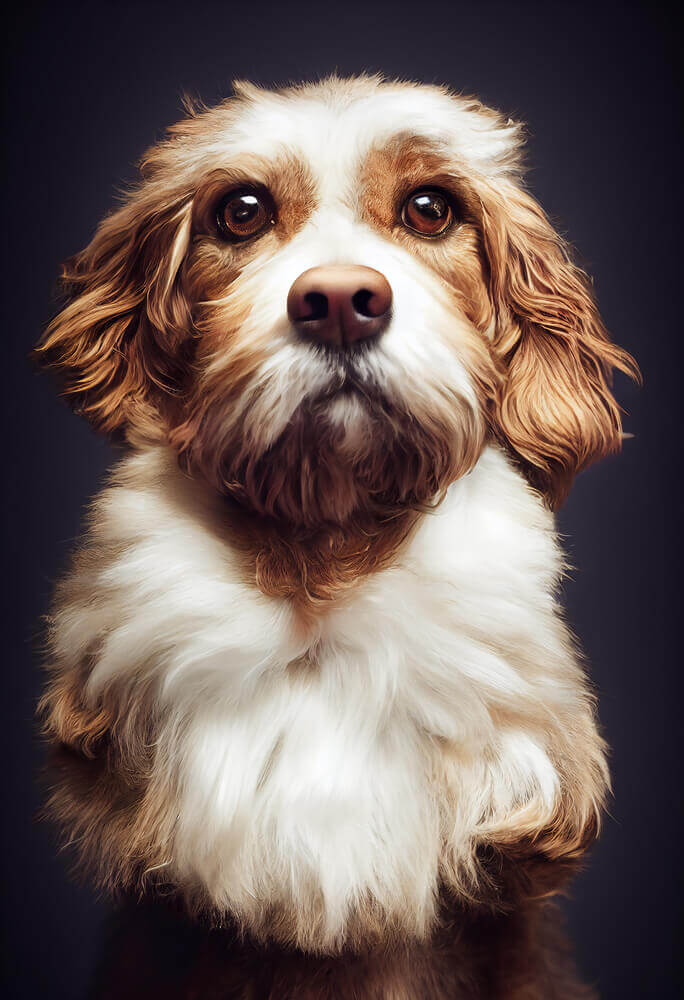 Yorkshire meets Germany when you combine a perky Yorkie with a mischievous Affenpinscher. Terriers like the Yorkie love to hunt - even if they are only hunting for their favorite toy - and although they are NOT terriers the Affenpinscher was originally bred to catch rats, so they share some of the same instincts too.

You might need to do a little more grooming if you chose this mix, thanks to the Yorkie's longer, silkier coat, but they are unlikely to want to go for long walks, so you should have the time. 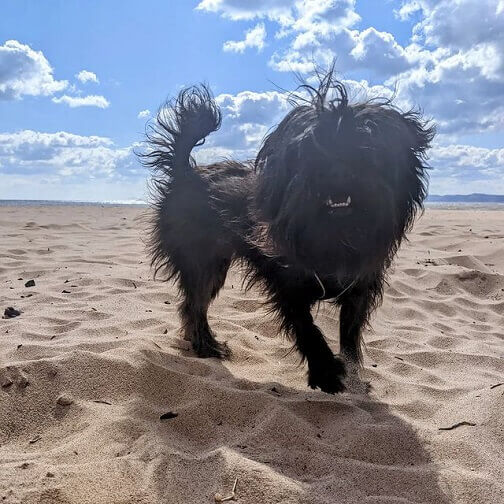 Another very interesting mix of nations can be found in an Affen Tzu!

Part Eastern, part European this Affenpinscher mix is a real pup of the world. As Shih Tzu means lion dog, and Affenpinscher monkey dog, this mix creates a fascinating combination of what are often considered mythical creatures!

Shih Tzus tend to be divas and thrive on lots and lots of attention, so by adding an Affenpinscher's hypoallergenic traits into the mix, you might get a pup everyone can cuddle and coo over. 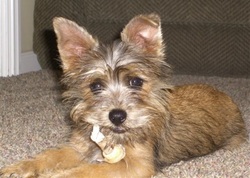 The Affenwhich. Photo by Dogs My Life

Norwich Terriers are very small - most weigh less than 12 pounds and ten inches is considered tall for one - but there is a lot of personality packed into that tiny body, and Norwich Terriers are known for being feisty and fearless, a throwback to their origins as highly effective ratters.

When a Norwich Terrier is mixed with an Affenpinscher any local rats must quake in fear, as the Affen is also bred to hunt them, so it becomes a mighty powerful 'anti-rat' combination.

The fact is though that most of them would rather stay home and play these days, although a game of hide and seek might be a lot of fun for them (and you).

The rough and ready nature of an Affenpinscher is tempered a little in the Chin-Fenpinscher, as such doggies also have the natural grace and elegance - and slightly frail appearance - of the Japanese Chin.

The Chin has naturally long and silky hair, so when mixing them with a wire-haired pup like an Affen you are likely to get all kinds of coat variations.

As we mentioned right at the start of this piece, Miniature Schnauzers and Affenpinschers already have quite a lot in common - both are wire-haired, both are shorter in stature and both are great ratters.

The Mini Schnauzer’s frame is usually a little more muscular and angled, however, creating a different body shape for the Schnauffen than you will find in many other Affen mixes. 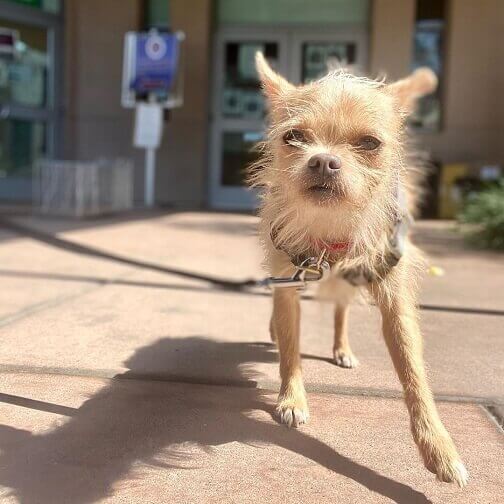 The combination of a chihuahua and an Affenpinscher makes for quite the mouthful in terms of name and quite the feisty, playful pup in terms of temperament.

These petite pups are another great choice for small space living, and while they will appreciate lots of playtime with their family, long walks will not be something they are likely to be very interested in.

According to many pet parents, a full bred Affenpinscher is hard to find - people wait on lists for months to get one - which goes a long way to explaining why Affenpinscher mixed breeds have become so popular. And, how cute they are of course (go back to our snapshots if you need a refresher!)

The ideal way to find any mixed breed dog is at your local shelter. Most shelters now have websites that list pups that are available for adoption, so you can check there regularly.

You can also keep an eye on national websites like Petfinder. Some shelters do participate in national transport programs that send pups looking for a home to different states to help ensure that they can find one, and Affen mixes may be included in one of those life-saving transports coming to an area near you soon.

A Word About Affenpinscher Mix 'Breeders'

As an Affenpinscher mix is just that, most reputable professional breeders will not advertise them for sale. Some hobbyist breeders do, but you should exercise great care when looking into them.

Many states are clamping down on 'backyard breeders' as the number of dogs found in heartbreaking living conditions, and suffering from disabilities and deformities as a result of over breeding is increasing.

While there are some excellent hobbyist breeders out there, do some careful homework into the conditions a pup has been raised under.