This article is going to deal with dog aggression that’s directed toward strangers and other dogs (dog on dog aggression). Both of these areas can be very stressful for dog owners and cause serious problems.

You may wonder why this is. I’ll tell you, but first let’s make sure we know what we’re dealing with when we see it.

Most people don’t recognize the signs of dog aggression until its way too late. They don’t see it until a full out dog fight starts or a group of kids are told in no uncertain terms by an annoyed dog that they’ve crossed the line.

The most common signs of dog aggression are:

(Note: There’s also something known as a “submissive smile” exhibited by some dogs. This is where the dog actually shows his teeth as he approaches. This can be confusing to many owners, but IT CAN be dismissed as such by the dog lowering his head as he “smiles,” and most often wagging his tale.)

When it comes to aggression, there’s also other indicators such as jumping or mounting or even standing in your way that are much less of a problem and often go ignored when they’re not accompanied with other more severe signs. 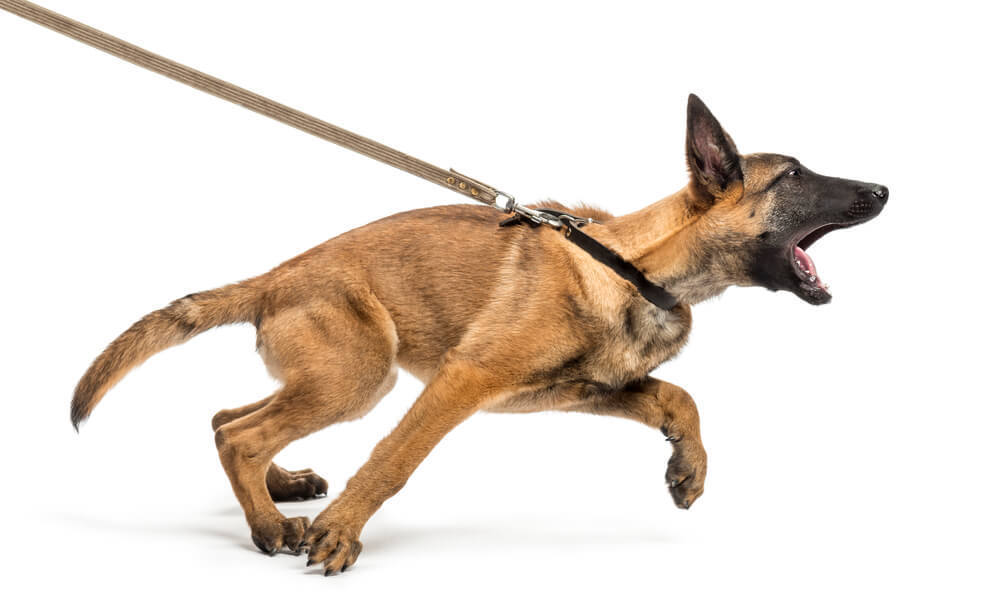 For example, dogs that are unsure about meeting someone new (canine or human) will be hesitant while approaching and “circle” their opposite.

You might even see suspicion and distrust in the dog’s eyes (with some of the whites showing).

Dogs have two areas on their back called “hackles” where they are able to raise the hair on their coat.

This area is located between their shoulders and just above the tail. Raised hackles become more obvious on some dogs than others depending on the type of coat, but it always means a much heightened state of awareness and excitement. It’s always a preface to aggression.

So even though raised hackles don’t automatically mean aggression, you need to pay attention and do your part to make sure that the situation your dog is in doesn’t escalate into an aggressive one.

So what exactly is your part?

Your Role as the Owner

In the absence of the leadership of the dog owner, the dog is forced to make all of these decisions on his own.

This is not only unfair to your dog, but it’s a very dangerous position to put him in.

When it’s not clear to the dog as to what his role is by the owner, the pressure is on the dog to be protective of his owner, territory, and of himself.

That’s a lot of worry and work!

The result of this is often an aggressive dog that really doesn’t need to be that way. On top of that, punishing a dog who is ultimately trying to protect his owners and territory makes things much worse.

Now that you understand what aggressive posturing looks like, if you happen to see signs of it in another dog while walking, AVOID that dog!

The best way to handle fear and fear aggression in dogs, is that you need to keep your confidence and nerves intact.

Your dog is sensing every bit of anxiety you’re having and most likely feeling the same way (how many times have you seen other tense owners pull in their lead for all their worth when you walk by with your dog?).

Just let your dog know that you’ll be taking a wide berth and avoiding the other dog altogether, and walk calmly by.

If for some reason there’s not enough room to do that, have your dog sit and place yourself in between your dog and the suspect dog as he walks by. If the other owner doesn’t keep his dog under control, you should let them know about it!

The opposite also applies. If you come across a dog that’s being playful and friendly, let your dog know that this is a “friend” and that a greeting is ok.

If possible, greet the dog first, then “ok’ the mutual canine greeting after. This seems to work best.

So all in all, you need to communicate to your dog what is a genuine threat and what isn’t. In reality, there isn’t much in this world that should be classed as a threat to your dog if you’re doing your job.

More importantly, you need to always communicate in a calm assertive manner.

No matter what you say, if you act like you’re scared, your dog will follow your lead.

You need to remember that our world is not identical to your dog’s world. A human’s world is much larger, noisier and scarier.

This is all the more reason that our dogs need the right sort of guidance.

How To Stop Dog Aggression?

A lesson about dog on dog aggression would not be complete without at least a short discussion about socializing your dog.

Socialization is the cornerstone of dog obedience and the best way of preventing dog aggression.

Socialization means allowing your dog to learn how to behave in social situations by regularly placing him or her in them.

Socializing your dog starts from puppyhood. Your dog needs to interact with other dogs and other people as much as possible.

Dogs that are not socialized with other people and dogs very often are the ones with aggression and behavioral problems.

When your puppy has play sessions with other dogs, keep your eyes open for other dogs that get along with yours, and make it a point to allow them to see each other again.

Also let your dog interact with older and bigger dogs who will keep your dog “in line” if he or she ends up showing dominant behavior.

On the other end of the spectrum, don’t let your dog hang out with other dogs that tend to be too rough and bully yours around to the point of where they cause your dog to stress and stunt his confidence. Dog socialization is a very important issue.

Always remember that the more familiar a situation is to your dog, the more comfortable he or she will be and the less he will need your guidance!

If your dog only sees you for most of the hours of most days, and sees very little of outside and other dogs and people, can you blame him for acting a little strange when he actually does get out in this big world?

There are two good online video based training courses that we recommend and can both help with aggressive behavior in dogs.

Both courses are good but they serve two very different purposes. The Doggy Dan online course tackles behavioral problems like excessive barking and aggression in ways that are creative, kind and most important - effective!

Brain Training For Dogs uses 21 brain training activities and is an excellent course for bored dogs that get destructive.  Dogs that are bored tend to get into trouble by looking for ways to entertain themselves. This course is a great fun boredom buster that goes from easy to very advanced. If you think your dog has behavioral issues stemming from boredom this video course is a good choice.