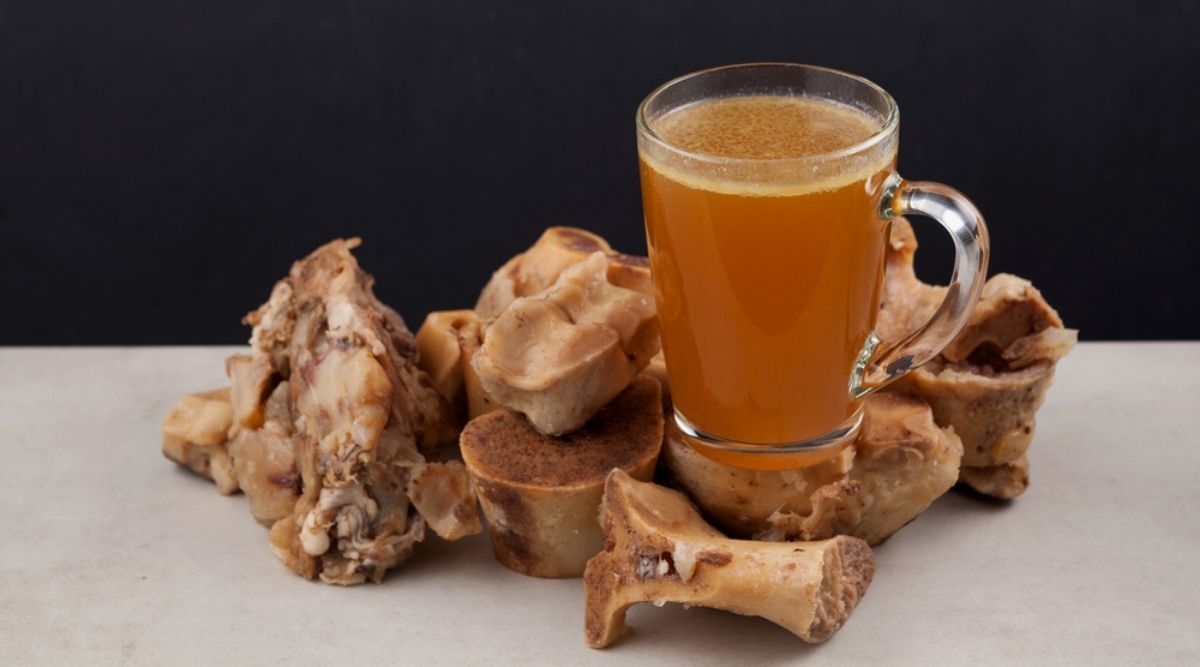 You may have at least heard people mentioning bone broth as a great addition to the human diet over the past few years, as, although it is far from a new idea - in fact it may be one of the oldest 'foods' in human history - it has regained popularity in recent years.

But did you know that some vets and animal nutritionists recommend that you give bone broth to dogs too?

As it is a buzzed about topic, you may be wondering if the hype around bone broth as a 'superfood' is any more than just that, and whether your pup would really benefit from it.

We are going to take a look at those issues, and more, here.

What Is Bone Broth?

Bone broth is, very simply, a broth made by boiling animal bones, and, sometimes, the tissue connected to them. It is something that people have been doing since they discovered fire when living in caves.

And as stock, it has been used in cuisines across the globe for centuries.

Hardly a new idea, or something that is hard to make. Yet, it 'fell out of fashion' as a popular standalone dish until very recently.

Is Bone Broth Good for Dogs?

On the whole, bone broth is indeed good for both dogs and humans, and offers some great health benefits for both.

Several nutrients are present in at least trace amounts in most bone broths. Incorporating vegetables to bone broth can boost its nutritional value dramatically.

Aside from adding wonderful flavor to home-prepared pet foods, bone broth has a number of health benefits, including:

Despite their low calorie content, broth and broth-based soups can make your pup feel fuller faster, making them a good choice for pups whose weight you are watching.

This will help prevent overeating and help them feel satisfied and less likely to beg for more food (which can be very hard for pet parents to deal with, as no one likes to think their pup is going hungry.)

Bone broth contains a lot of water, which helps your pup keep hydrated. Water makes up about 70% of the canine body and has an impact on almost every physical function.

A dog that does not drink enough water - and some pups habitually do not - become prone to all kinds of health problems, including urinary tract infections, painful constipation, a dulled coat and dry skin, and more seriously, kidney problems including kidney infections and even kidney failure.

By offering a pup who is not excited by plain water bone broth, you can help them stay properly hydrated and healthy. We also encourage you to add home-prepared bone broth to each recipe.

Small levels of the amino acid glycine are found in bone broth, which may help your pup relax and get a better night's sleep.

Often we overlook the importance of our pups getting enough good sleep, but without it not only will they become as cranky as a tired human but also prone to the many health issues associated with a lack of sleep.

Bone broth is simple to create yourself at home, and a savory addition to a variety of sophisticated and delectable dishes for humans. It's also a fantastic technique to put otherwise uneaten animal bones and tendons to good use.

The bone broth consumed by pups can also be eaten by their human friends, so the effort -and it does take a while to make, as we'll look at in more detail in a moment - is well worth making as you can cook up something that's good for the whole family, whether they have two legs or four.

The nutritional content of bone broth varies wildly, as it very much depends on what kind of bones are used, how long the broth is simmered, whether tendon meat is also included and what else is added to the broth.

On average though, bone broth is low in calories - around 30 calories a cup - and will contain essential nutrients like iron and a surprising amount of protein, around 5g per cup.

While there is no doubt that bone broth is good for dogs, some claims being made on the Internet and in the media in general are very much unproven and should be taken with a grain of salt.

This is very much anecdotal evidence, as there are no scientific studies backing these claims up in either dogs or humans.

However, there are plenty of proven benefits of offering bone broth to your pup - and trying it yourself - to make it a worthwhile addition to their diet.

How Much Bone Broth For Dogs?

While it is good for most pups - and most will enjoy it a lot - bone broth should be given to your pup in moderation, and introduced to their usual daily diet slowly to avoid digestive discomfort and stomach upsets.

Many pet parents make use of a small amount of bone broth - about a third of a cup is ideal - to moisten dry dog food. Doing so is a great way to introduce it in general, and it can help make dry dog food more appealing, which might be especially helpful to the pet parents of picky eating dogs.

Another great way to offer your dog a small amount of bone broth is to freeze it in an ice cube tray, and then offer the resulting 'ice cube' as an alternative to more calorific dog treats.

This can also be a good way to help your pup get the extra hydration they need in warmer weather.

However, don't overdo it: one or two bone broth ice cubes at a time is ideal.

How To Make Homemade Bone Broth For Your Dog

It's not hard to make bone broth for your dog at home. It can, however, be very time-consuming if you have to boil the bones on the stovetop.

You can also up the health benefits of bone broth by choosing specific proteins and making some simple ingredient additions.

With convenience, nutrition and taste in mind, here's a look at some of our favorite bone broth for dogs recipes you can try your hand at (and maybe adjust for your own tastes too.)

Refrigerate: up to 3 days.

One of the reasons that people avoid trying bone broth for their dogs is that it can take so long to make.

If you have an Instant Pot (or a slow cooker) that time is significantly cut, and you can cook it safely while you aren't even home.

There are lots of Instant Pot bone broth recipes suitable for dogs out there, but this one is a favorite with many of the dogs we know.

Some recipes on the Internet for general bone broth add bad for dogs ingredients like onions. Make sure that you only make use of dog safe ingredients in your pup's bone broth and save all the extra flavorings for your own!

You can also make use of bone broth to make some tasty (to pups anyway) dog treats. Why not try out this easy recipe that makes use of bone broth and a handful of other common dog safe ingredients when you have a little time to do some baking?

Optional: Spread cooled treats with peanut butter before offering them to your pup.

Where Can I Buy Ready-Made Bone Broth For Dogs?

Don't have the time to prepare bone broth for your pup yourself? We get it! Sometimes it's hard to find time to cook for yourself, let alone for your dog! The good news is that it is becoming increasingly easy to buy great tasting healthy bone broth for dogs that can be served up in a matter of minutes.

Some of the best we’ve found include Brutus Bone Broth for Dogs, which is fortified with additional Glucosamine and Chondroitin for healthy bones and joints in both puppies and older dogs, and The Honest Kitchen Daily Boosts: Instant Bone Broth Liquid Treat with Turmeric for Dogs.

Nylabone even offers Bone Broth Dog Treats, if you’d like to try adding the health benefits of bone broth to your dog’s diet with ease that way.