Every pet parent wants to ensure that their pup is as healthy and happy as possible, and any signs of illness or distress are as upsetting for them as they are for their pet. Becoming a little more informed about common conditions that affect dogs - and perhaps your breed specifically, can be very helpful, as should things seem to begin to 'go wrong' you will be better equipped to take the right action.

Here we will take a look at a disease of the eye commonly seen in dogs: Progressive Retinal Atrophy, or PRA for short.

What Is Progressive Retinal Atrophy?

A dog's eye, like the human eye, is made up of several different components, each of which serves a different purpose. The retina is a thin layer of skin that sits at the back of the eye and receives focused light from the lens. That light is then converted, via a series of photoreceptor cells in the retina known as cones and rods, into electrical signals sent to the brain, where they are processed and 'returned' as images.

When Progressive Retinal Atrophy begins to set in, as the name suggests, the retina begins to atrophy and the number of cones and rods it contains begins to decrease and fails to replenish as it should.

This leads to decreased visual abilities and eventually to blindness.

Early onset Progressive Retinal Atrophy, also known as Retinal Dysplasia, is commonly found in young puppies whose retinal photoreceptors develop abnormally from birth. The later onset form is usually diagnosed in older dogs between the ages of two and five, and occasionally a little older.

What Causes PRA in Dogs?

For the most part, PRA is a genetic, inherited disease. It can affect any breed and is also seen in mixed breeds. Just how the defective gene is inherited varies, but as a general rule once a pup is discovered to have the disease, and thus the gene, they should not be allowed to breed.

Are Certain Breeds More at Risk for PRA Than Others?

As we mentioned, Progressive Retinal Atrophy can occur in any type of dog, but there are indeed some breeds that seem to be more predisposed to it than others. Dog DNA tests are a great way for owners to discover their dog's genetic heritage and health predispositions.

In terms of early onset cases breeds including the Alaskan Malamute, the Welsh Collie, the collie and the border collie and the Mastiff are commonly more often affected, although the incidence is decreasing as breeders become more adept at 'weeding out' genetic carriers from their breeding programs.

Late onset PRA is most commonly found in Cocker Spaniels, Dachshunds, Golden Retrievers and both Toy and Standard Poodles. Again however, within the pure breed communities the incidence of Progressive Retinal Atrophy is decreasing thanks to improved breeding practices. As we mentioned, PRA can also occur in mix breed dogs, but most experts agree that in order to develop the disease a pup usually must inherit the gene from both parents.

How Can I Tell If My Dog Has Progressive Retinal Atrophy?

Progressive Retinal Atrophy is in no way painful, and as dogs have great senses of smell and hearing, and do not rely on sight quite as much as humans do it can be hard to tell at first if there is really anything wrong with your dog's sight at all. Often however, as the rods in the retina seem to deteriorate first, and faster than the cones, a pup will develop obvious night blindness as one of the biggest functions they have in eye to allow vision in low light.

Pet parents concerned that their pup's vision is fading due to PRA may also notice that when the light shines directly on their pup's eye it becomes very reflective, and the pupils may dilate more than usual. And while increased clumsiness can simply be a sign of aging it can also indicate worsening vision as well.

How Is Progressive Retinal Atrophy Diagnosed?

It takes a full, expert examination by a veterinary ophthalmologist for Progressive Retinal Atrophy to be officially diagnosed, but a general eye exam conducted by your family vet will often be the first place that a suspicion of the condition can be picked up, allowing the pup to be referred on for further testing. 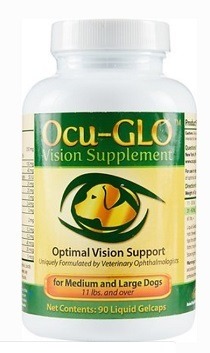 Ocu-GLO™, a vision supplement for dogs may slow down the progression but it does not cure it. Available at Chewy.com

Treatment Options and Prognosis for PRA

Unfortunately, Progressive Retinal Atrophy has no known effective cure and there is no real way to treat it medically either. As it is the result of deterioration of bodily resources that cannot be replaced the eventual outcome of PRA will almost certainly be total blindness.

There is some very limited evidence that certain antioxidant vitamins and naturally occurring amino acids like those found in the Omega 3 fatty acids family may preserve eye health nothing has been found that could be considered conclusive. However, as these substances do no harm and can be beneficial to the body as a whole giving them to your pup is perhaps not a bad idea.

Although there is no cure, or even truly effective treatment for Progressive Retinal Atrophy the diagnosis may seem bleak, especially as most pups do develop total blindness within a year or two after the onset.

However, dogs deal with a loss of vision far better than humans, as they can get by well by relying on their other senses, especially their sense of smell. With a few lifestyle changes, and extra vigilance on the part of their pet parents pups living with PRA can still lead very happy and productive lives.