Why Are Dogs Scared of Vacuums? 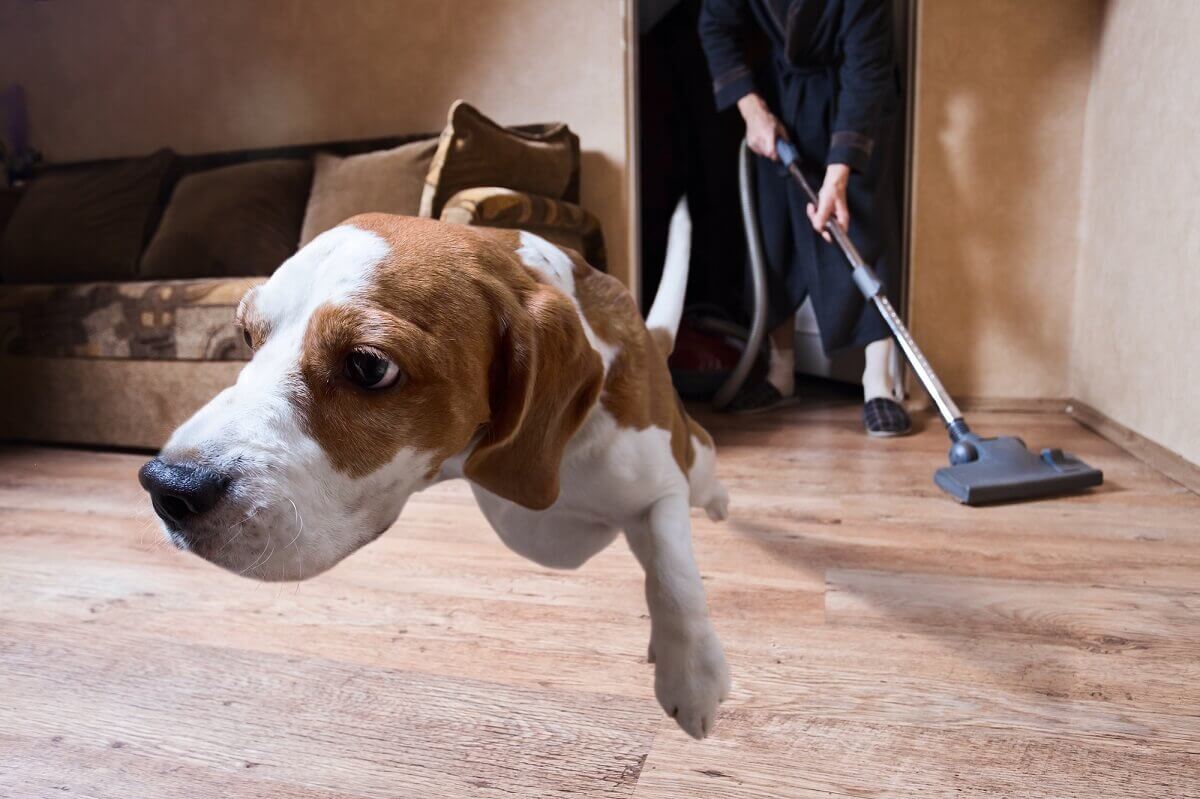 Even the most fearless of pups have some weaknesses, and for many it is that whirring, roaring monstrosity that their humans seem to unleash far too often that can reduce them to a cowering pile or fur, or a snarling, barking monster hunter.

By this, of course, we mean a vacuum. But why are dogs afraid of vacuums? And what can you do to help him get used to it?

While all of this can be amusing, a dog who is scared of the vacuum can make housework - already not a fun task - harder, and in any case, no-one likes to deliberately scare their furry friend.

Not to mention the loss of an expensive household appliance because their dog ‘vanquished’ it by chewing through its power cord or removing its brushes.

How Do Dogs React to Vacuums?

Occasionally, a dog may continue on about their day - or their nap - when the vacuum comes out, but without specific training (more on the later) many dogs may react in one (or more) of the following ways:

None of these reactions are particularly desirable behaviors, especially that last one, as it can result in both damage to your pet hair vacuum and to your pup as well.

Why Are Dogs Scared of Hoovers?

As we mentioned, the vacuum is one of those things that can rattle even the calmest of dogs.

While other household gadgets and appliances might not bother them at all, many really do seem to have an issue with the vacuum, be it an upright, canister-style vacuum or a Roomba.

There are a number of possible reasons your dog is zuigerphobic (afraid of vacuum cleaners).

Why do dogs hate vacuums?

The most common reason most dogs are scared of the vacuum is the noise. Even ‘quiet’ vacuums make a noise, and it is a whirring, sometimes roaring sound that is quite unlike any other.

To understand more about why that noise upsets so many dogs so much, it helps to understand the differences between your hearing and that of your pup’s.

Dogs' hearing is four times more sensitive than humans, allowing them to perceive sounds four times farther away. They can hear higher frequencies, identify sounds more easily (for example, they may recognize the sound of your car), and determine the exact position of the sound.

Air vibrations produce sound. The higher the loudness and frequency, the more vibrations per second there are. Humans are unable to hear noises that vibrate at more than 20,000 times per second (20,000Hz). Because our hearing deteriorates as we get older, babies can hear higher frequencies than their elders, but not as well as dogs.

Dogs can detect sounds that vibrate at up to 50,000 times per second (50,000Hz). A dog whistle normally produces a sound with a frequency of greater than 20,000 Hz, which is why dogs respond to it even though it appears to us to be silent.

So, why do dogs have a superior sense of hearing to humans? Dogs have up to 18 muscles controlling their ears, whereas humans only have six and can only move their ears minimally, if at all.

Dogs can tilt and twist their ears to better funnel sounds into the inner ear. Furthermore, the ears of some dog breeds are shaped in such a way that they enhance sound.

The ear canal of a dog is significantly longer than that of a human, too. Muscles allow it to fine-tune the location of this ear canal so that it can better localize sounds and hear them from a greater distance.

All of this means that the sound of your vacuum to your dog's ears is much louder to them. It may sound like a huge sudden thunderstorm, which, having landed right in their living room, is naturally disturbing and scary.

And by the way, if you also have a cat, as impressive as your dog’s hearing is, theirs is even better.

Cats have 30 active muscles in their ears - yes, they probably really can hear you opening their cat food from three rooms away - and so the vacuum may be even scarier for them.

Dogs also have a much more acute sense of smell than we do, and as the purpose of a vacuum cleaner is to draw out all the dirt and debris in your carpets, you know yourself that it can cause temporary odor issues as it does so.

Your pup will be able to smell these far better, and if they are unpleasant that gives him another reason to dislike this intruding metal monster.

How To Get Your Dog Used To The Vacuum Cleaner 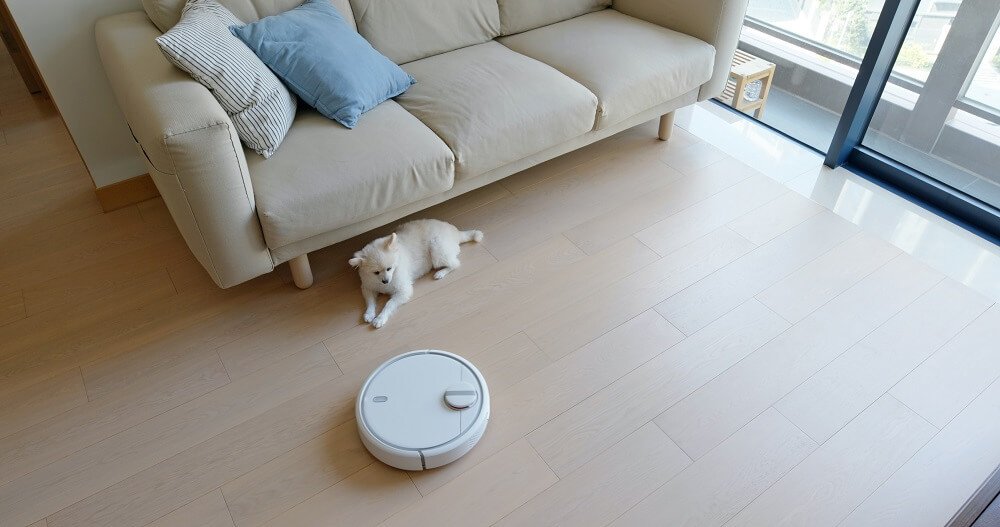 The chances are that not using your vacuum because your pup does not like it, or is afraid of it, is not an option if you have carpeted floors. Those with hardwood floors may be able to switch to a broom with ease, but it’s worth noting some pups don’t like those either.

So what are your options when it comes to getting your dog to not be afraid of the vacuum cleaner.

Switch to a Quieter Vacuum Model

Some pet vacuum cleaners make considerably less noise than others. It's worth noting right now that there will never be a completely silent vacuum cleaner. After all, it's a machine with moving components, and sucking air is a time-consuming process, so it makes quite an amount of noise.

A reduction of 8dB or more may not seem like much, but if you're sensitive to noise, it will make a difference, and as most pups are, they will benefit.

While a good quality vacuum cleaner is rarely an inexpensive purchase, and while you may not remove your pet's fears completely, switching to a quieter model may be a good investment (especially since the low noise options are often more efficient too).

Switch to a Manual Sweeper

Before vacuums became commonplace, most housewives (because women did do most of the housework back then) made use of a manual carpet sweeper. Such things are still widely sold and are quieter than using a broom and far less expensive to buy.

On the downside they are not as efficient as a high-powered vacuum cleaner, but for lightly soiled carpets and hard surface floors they work just fine and are far less likely to scare your dog.

Try Making Use of Vacuum Conditioning

If you really don’t want to give up your vacuum, which may be the case for those with kids and pets who make messes, or those with deep pile carpets, you could try training him to be less afraid of it. While this won’t work for all dogs, and will take effort on your part, it may be worth a try.

Exposing your dog to the vacuum in small doses may help to alleviate his fear of it, especially if you reward him with goodies while the vacuum is on, so he learns that it isn't anything to be afraid of.

This is known as desensitization, and it entails gradually working with your dog to transform his terrified response into a positive one by not only acclimating him to the vacuum, but also rewarding him for responding well.

One method is to have a friend or family member vacuum in another room while you engage with and pet your dog. Allow your friend to slowly bring the vacuum closer to your dog as you continue to praise him with treats, urging him to stay put as the cleaner approaches.

You may not be able to do everything at once, but short sessions with enough repetition and incentives may eventually convince your dog to not be afraid of the vacuum.

Start teaching puppies that vacuums aren't scary as soon as you can! Do this during the stage of socializing your puppy - to prevent undesired responses later on as they mature. 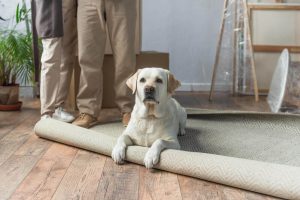 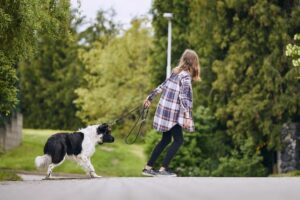 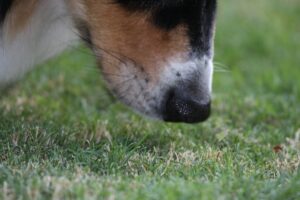