Choosing a “doodle” breed dog has become quite popular because of its great personality and easy-going temperament.

However, not all doodle dog breeds are the same. They come in a variety of colors, coats, sizes, and shapes. Of the most popular doodle breed dogs, the Goldendoodle and Australian Labradoodle are at the top of the list.

But, how do you know which is the right one for your family and home and how do you tell the difference between the two?

That's what this guide is for and we'll look at these two breeds side by side to help you get a better understanding of their similarities and differences.

What, Exactly, is a Doodle Breed?

There is much more to these two breeds though than shedding and softer coats. They are part of the Doodle breed, which includes a variety of mixed breed types including Bernedoodles and Aussiedoodles to name a few.

It starts with a Doodle, which includes any mixed-breed dog that has the combined traits of a Poodle and another breed. So, the main similarity for Doodle breeds is that they have some Poodle in them.

The secondary breed used is what makes each Doodle breed unique from the other. 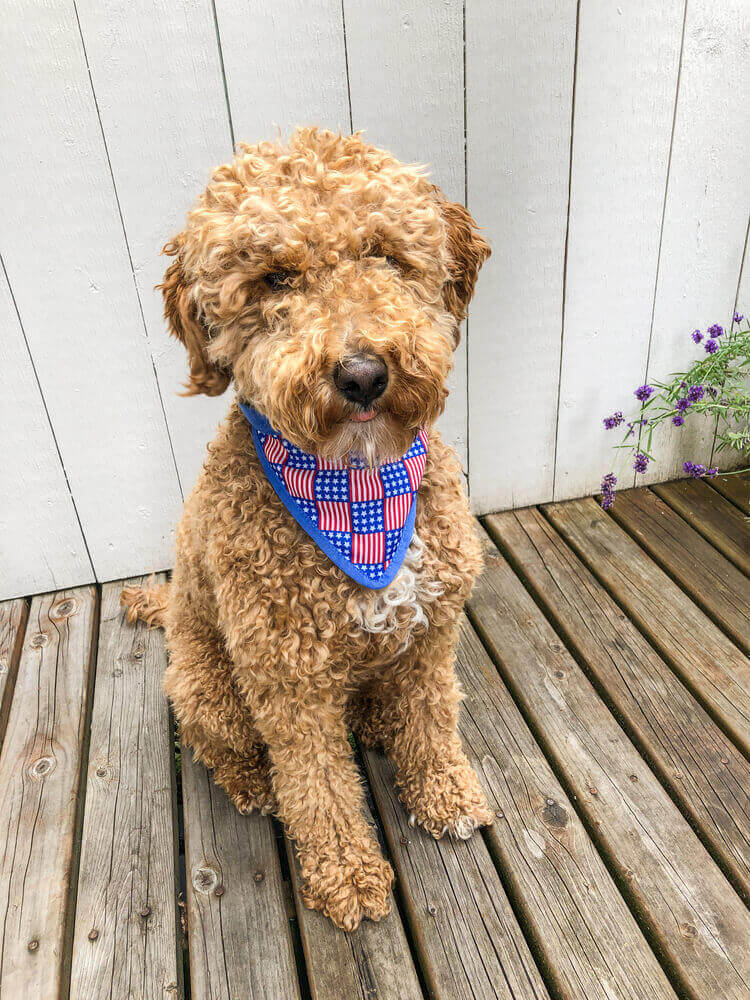 Australian Labradoodle is a mix between the Labrador Retriever, Poodle and Cocker Spaniel.

Australian Labradoodles originated in Australia and were bred for a specific need. A breeding manager names Wally Conran has a special request for a guide dog for someone who was allergic to dogs. There really aren't any breeds that are fully hypoallergenic, however, the Poodle has a coat that is curly and traps the dander that causes allergic reactions. This is how the Labradoodle was created.

Australian Labradoodles can grow to about 2 feet in height and up 77 pounds in weight. The size will depend on what type of Poodle has been used, for example, a miniature Poodle will produce smaller Labradoodles. They have one of two coat types: woolly-textured or fleece-textured. The wool-textured coats are very curly and feel like sheep's wool. Fleece-textured coats have wavy, straight, or spiral curled hair. They have a body that is compact, graceful, and athletic with a medium bone structure, a large square-shaped muzzle. The Australian Labradoodle comes in three sizes: mini, medium, and standard and four basic colors of black, yellow, caramel, and chocolate.

The original Goldendoodle was a hybrid cross of a Golden Retriever and a Poodle.

Of all of the Doodle breeds, the Goldendoodle is the most well-known.

They are most sought after due to their very easy-going personalities and their low to non-shedding coats. Created by mixing a Poodle with a Golden Retriever, Goldendoodle dogs are on the larger side, however, sizes do vary depending on the Poodle size used.

They get their gentle personality and temperament from their Golden Retriever parent and their high intelligence from their Poodle parent. Their relaxed  social character makes them wonderful choices for use as therapy dogs.

Goldendoodles have coats with long hair that can be curly, straight, or somewhere in between.

They also come in a range of colors, depending on the color coat that their Golden Retriever parent had. Colors include shades of red, gold, and yellow. They tend to have broad muzzles, rounded skulls, drop ears, oval-shaped eyes, and a tail that is heavily feathered. Their bodies are muscular and long, with a deep chest, and a stance that is wide.

What is the Difference Between a Labradoodle and a Goldendoodle? 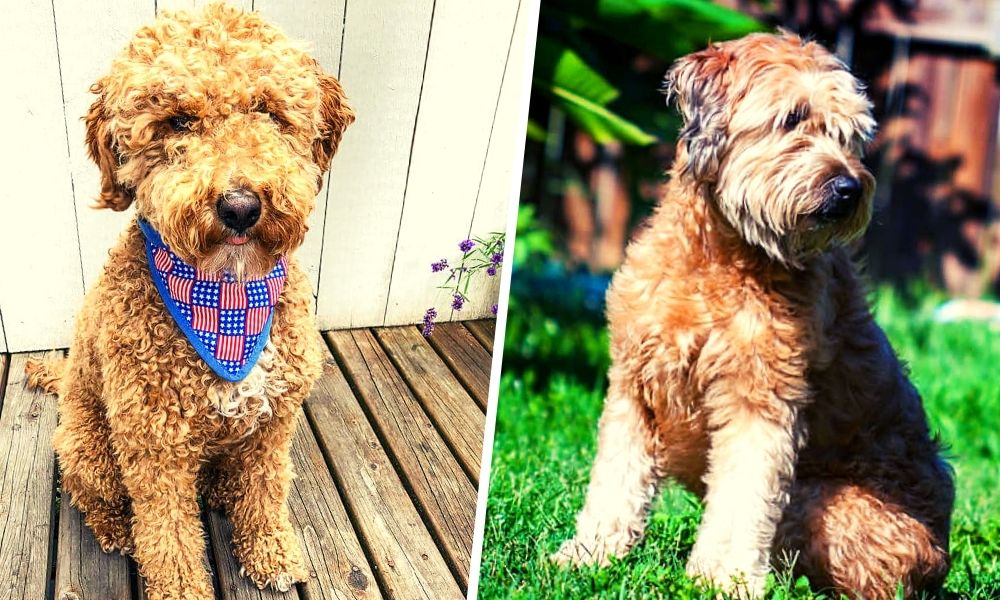 The Australian Labradoodle breed dates back to the 1980s. A breeding manager of Royal Guide Dogs, Wally Conron, was tasked with the challenge of creating a breed that was hypoallergenic for a customer who had dander allergies.

The Goldendoodle was bred during the 1990s in both America and Australia. They were bred in three sizes, depending on the Poodle breed used. The reason for the creation of this crossbreed was to have an alternative to the Labradoodle breed and was also created for its hypoallergenic coat.

The temperament of the Labradoodle is sociable, very clever, energetic in open areas, are comical at times, and joyful. Their friendly manner makes them easy to train and they tend to have a sixth sense regarding the needs or emotional state of their family members. It's this intuition that makes them perfect dogs for people with special needs.

The temperament of the Goldendoodle is gentle, affectionate, playful, and extremely sociable. They are calm, trustworthy, friendly, and have an enthusiastic nature with high energy levels. They are also very intelligent and can figure things out quickly.

Both breeds make for lovable companions, are highly intelligent, and are great as family pets, therapy, and service dogs.

Labradoodles are classed as medium maintenance. Puppies will start to lose their puppy coat between 6 months to a year old, so they will need regular brushing to prevent their coats from getting matted. As adults, they need to be regularly brushed and trimmed. Nails should be trimmed once a month. Adult coats are non-shedding and considered hypoallergenic.

Goldendoodles are classed as low maintenance. Puppies need to be brushed daily with a slicker brush followed by a metal comb and will begin to shed their puppy coats at around 6 months old, being replaced by a coat that is much stiffer and thicker. Adults will need regular brushing and trimming, especially around the face, feet, and tail. They are easier to keep clean with a shorter cut. Nails should be trimmed once a month. Adult coats are non-shedding and considered hypoallergenic.  Daily brushing will keep your dog mat free.

Australian Labradoodle's generally have a lifespan of 15 years. Goldendoodles have a typical life span of 10 to 15 years. Both breeds have health issues that are specific to their breed and those of their parents. However, this is lessened when bred by a reputable breeder.

Labradoodles are a highly intelligent breed, making them pretty easy to train. Puppies are especially quick to learn because of their desire to make their humans happy. You do need to be careful though because they can just as easily learn bad habits. According to WALA (Worldwide Australian Labradoodle Association) Labradoodles do not respond well to strong aversive training, so you need to have patience when training them. Positive reinforcement and clicker training are far more successful and fun for Labradoodles.

Goldendoodles have a strong pull towards socialization and can get easily bored due to their high-energy temperament. However, they are intelligent and are fairly easy to train. You will need to establish that you are the pack leader when training, otherwise your Goldendoodle will get distracted because it wants to play. They require training that is more structured and consistent.

Australian Labradoodles are moderate barkers and tend not to bark unless there is a reason. Because they are intelligent and learn easily, you can train them to not bark as a result of certain triggers.

Goldendoodles tend to be a quieter breed and, like Labradoodle's, only bark when they want to communicate something to their owner. However, all dogs are different and you may get a barker. It is fairly easy to train them not to bark at certain triggers.

Both breeds are very active and will need to have at least one hour of play and exercise time a day. Their high intelligence also means they need to be entertained throughout the day. Labradoodles like to get out and about and should be walked twice a day. Training and sports (obedience, agility, fly ball, etc) are also great ways to challenge your Labradoodle mentally. Goldendoodles are more high-energy and will need at least 2 hours of play and exercise a day. Mental exercise is as important as physical exercise. This means challenging your pup to use its brain!

Common health issues that both breeds may develop are ear infections, eye infections, elbow and hip dysplasia, epilepsy, Addison's disease, skin allergies, night blindness, and heart disease. Making sure they are well taken care of and raised by a reputable breeder will lessen the chances of them developing these problems.

While there is no perfect food for Doodle breeds, one thing to keep in mind is that dogs are carnivores and will need meat in their diet. If using commercial foods, use a variety of brands because each will have different sources of protein. You can rotate them daily or every couple of months. Aside from dry food, you should add fresh food to your Doodle's diet, such as raw or cooked meats, fish, eggs, and vegetables.

Should I get an Australian Labradoodle?

Labradoodles make for great family dogs because they are easy to groom and train. They do require regular daily exercise. They are a good choice for first-time pet owners and are very good with the elderly, children, cats, and other dogs.

They make good companions for people who are active and like the outdoors but are just as happy sitting by the side of their family members indoors too.

Should I get a Goldendoodle?

Goldendoodles are a good choice for an active home because they are lively and fun-loving. They get along with other dogs and are welcoming to new people. They also adapt easily to new situations and you can take them along wherever you go, including on vacations.

Their stability in most situations and environments, particularly with children, elderly, and the disabled make them a great choice as a trained service or therapy dog.

Goldendoodles get on great with children of all ages and love to play with them. So they are also a good choice as a family pet.