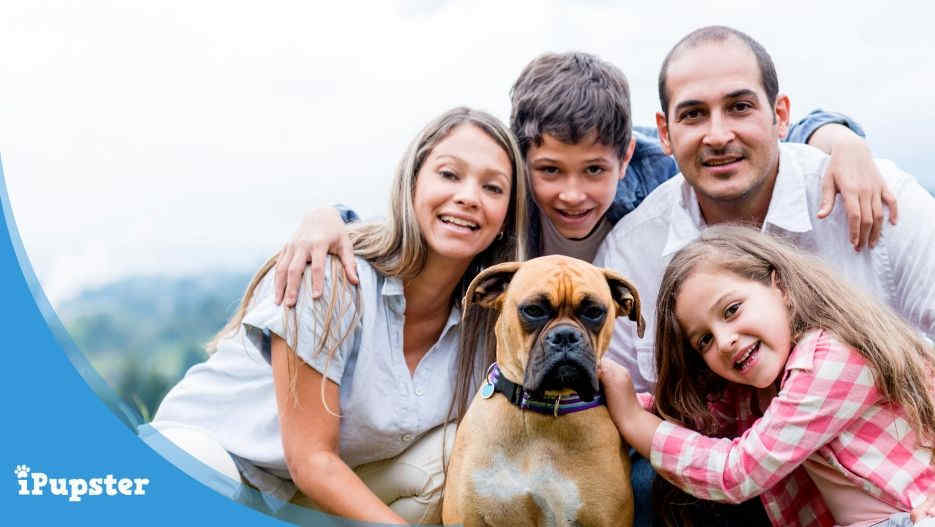 The Boxer dog is a true family favorite and a pup that lights up the lives of pet parents in thousands of households across the US.

Known for being bright, smart and very active a Boxer dog is also a very good looking pup, often standing as tall as 25 inches and weighing as much as 80 pounds.

The modern Boxer dog can trace his roots back to both the Assyrian Empire in around 2,500 BC, and to 15th century Germany and a strong and powerfully built hunting dog known as the Bullenbeisser.

But the Boxer we are familiar with today is most closely related to the sleeker versions of the Bullenbeisser bred in the United Kingdom in the early 20th century and introduced to the US just after the World War II.

Nevertheless Boxer dogs today still display the loyalty and the smarts that their very ancient ancestors did.

The Boxer dog is usually a strong and healthy pup who is likely to live a long life - 10-12 years or more - but there are some health conditions to which the Boxer is particularly prone to.

Understanding what those are - while also hoping they never affect your pup - can be very helpful, especially if you are considering purchasing pet health insurance to help meet future medical costs your fur kid might incur.

The genetic makeup of the Boxer dog has been altered several times over the years and many of the health issues they once commonly faced, like hip dysplasia (an abnormality in the hip joint most commonly affecting German Shepherds, Great Dane and Labrador Retrievers ) have been almost bred out.

There are some health conditions that they are still often more prone to than other dog breeds of a similar size and body type. These include all the following: 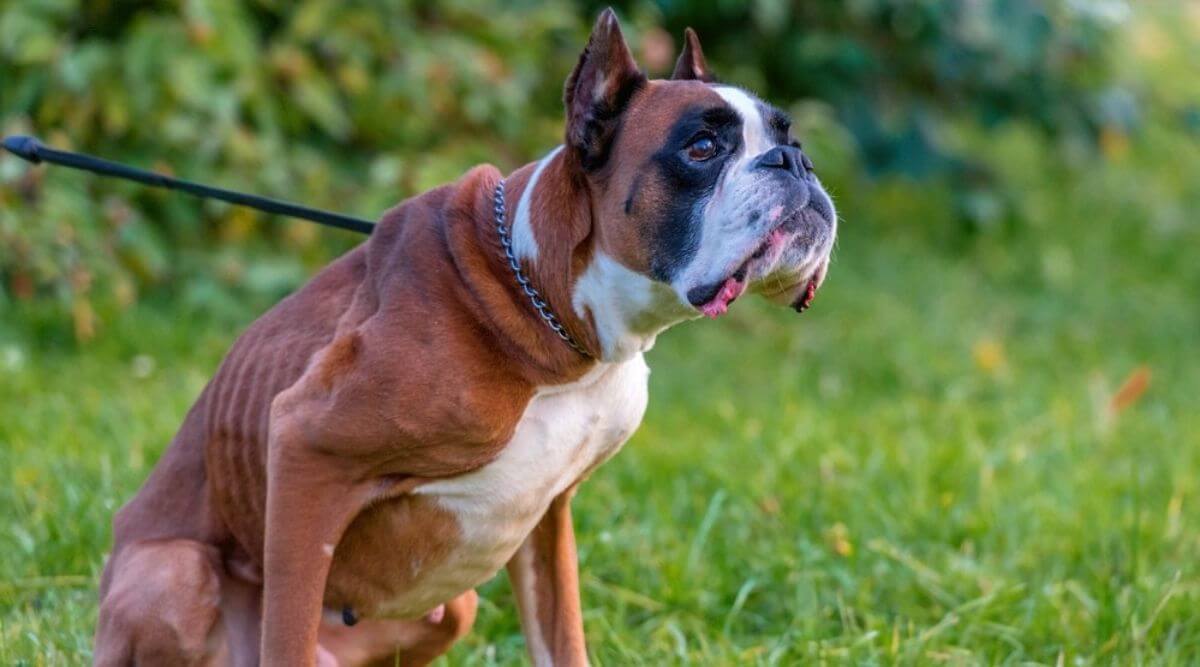 The Boxer dog is known to have a genetic disposition towards a type of cardiomyopathy - aka irregular heartbeat - that is unique to the breed. Also known as BAC, FVA, or ARVC it causes the heart to beat with an entropic rhythm and can, if left untreated, lead to heart failure.

As it can be several years before this condition makes itself known regular checkups that include heart and vascular checks are a must for Boxer dogs of all ages. If the condition is detected it can be managed in most cases by diet changes and medication.

Pet parents of Boxers do need to be prepared for the fact that some diagnostic testing associated with BCM can be rather expensive and perhaps be prepared to pay several hundred dollars if they need to be performed.

Hypothyroidism occurs when a pup's body is not able to produce enough thyroid hormones to keep them healthy.

It's a condition that can manifest itself in a number of different ways, including unusual lethargy, limb weakness and even fur loss and unusual weight gain.

If hypothyroidism is suspected your vet can diagnose it via a series of blood and urine tests and it can then managed by a lifelong course of synthetic hormones.

Most dogs diagnosed early with hypothyroidism lead full lives, but their pet parents must ensure that they take their, sometimes rather expensive, medicine for the rest of their lives.

A Boxer dog can develop arthritis in the same way as a human being can, and, unfortunately for Boxers it is not always associated with advancing age. Although most common in older Boxer dogs.

Some as young as one or two have been known to develop it as well.

Arthritis is not something that can be cured, but it can be managed.

Pain management, weight management, diet change and sometimes alternative treatments like acupuncture and chiropractic care are all commonly used to help make the life better for an arthritic Boxer dog (although it may drain their pet parent's bank account a little).

The health problems we have described are common in Boxer dogs but there is nothing to say that it is a certainty that your beloved Boxer will develop any of them.

However, like any dog, they are likely, over the course of their lives, to succumb to at least some illness or injury.

Despite giving them the best nutrition or allowing ample time for clean and healthy playtime and exercise, aging and ailment go hand in hand.

When most humans get sick or injured, they can rely on their health insurance to help offset the costs involved in recovery.

This is now also an option for Boxer dogs, as an increasing number of companies are offering pet parents the chance to purchase pet health insurance for their pups of all ages to help ensure that when they need medical treatment, they can get the help they need quickly and efficiently and not put themselves in financial jeopardy before saying no to a treatment for their beloved pet.

As it is something that is a relatively new offering, owners considering purchasing Boxer dog insurance have two critical questions - how much does it cost and just what does pet insurance cover?

These are questions, and answers, we will be covering next.

As you probably know from shopping for insurance yourself, either health insurance or coverage for your home or car, the costs involved vary from company to company and according to various existing factors and the level of coverage desired. This all applies to pet health insurance as well.

It is possible to get a general idea of the possible costs involved for Boxer dog health insurance and to give you that here we requested quotes for two beautiful Boxers we know to use as examples from one of the largest providers of pet insurance in the US.

The first quote we requested was for Buster, a Boxer Dog who is a bright and boisterous two-year-old with no known health problems. For Buster, the quoted costs broke down as follows:

She has no known health problems at the moment, but as she is an older lady, the chances are she will soon need to visit her vet more often, something that is reflected in the rather different pet health insurance quote they offered us for her:

As you have probably realized, the quotes you are likely to get for pet health insurance for your Boxer dog will not be exactly the same as these, and they will depend on unique to them factors like their age, current health, vet care in your area, chronic conditions and even perhaps their weight and height.

However, these examples do offer a look at just what you might expect to pay should you decide that pet insurance is the right choice for you and your dog.

If you have taken a look at our sample quotes, you will also have noticed that the amount of the deductible you are willing to carry makes a significant difference to the price of the monthly premium and is something else to keep top of mind as you comparison shop.

Boxer Pet Insurance - What Is and Isn't Covered?

The one thing that is as important as comparing price when shopping for pet insurance is comparing coverages, both between the various different companies offering pet health insurance for your Boxer dog and the different coverages offered within a single company.

It is possible to purchase insurance that is designed to really only provide cover for emergency treatment.

This tends to be the option that has no deductible attached to it - so that it is available immediately when you need it - but does not offer as much coverage for more general vet visits and treatments as some higher deductible plans do.

This is still very useful pet insurance, as the last thing any pet parent wants to worry about are treatment costs when they are already worrying about their poorly pup.

Most pet parents don't worry so much about skin rashes, split toenails, ear infections, a little indigestion or any of the little stuff.

What they care about most - is the big ticket items - hip dysplasia, cancer or life extending surgery.

Dog insurance plans that cover regular checkups and basic medications and vaccinations are often the best choice for a senior Boxer dog like Adrienne.

As she ages, its likely she will need more tests than a younger dog, or will need new medications to keep her happy and healthy, so by opting for this kind of insurance her pet parents can keep her as healthy as possible while worrying less about the impact it will have on their bank balance.

There are also some pet insurance plans that will cover less ordinary treatments, including things like acupuncture, chiropractic and behavior modification.

For a Boxer dog who might be able to benefit from such things this may be an investment well worth making.

You should also make sure that you are very clear about what a certain pet insurance plan will not cover. Many plans do not offer coverage for ailments that are considered to be purely genetic or inherited and even fewer will cover pre-existing conditions.

Finally, the way pet parents are reimbursed by their chosen pet insurance provider is something else that it is crucial they understand. Some pet insurance companies will reimburse a vet directly, resulting in fewer initial out-of-pocket or upfront costs for pet parents.

There are a few possible downsides of such policies, however.

Some do limit coverage to treatment by certain selected vets and they may not cover the entire bill, with the average being that 80-90% of the costs are covered and paid directly to the health care provider and the pet parent is then responsible for the remainder of the bill (copay).

As we hope we have made clear here, there is a lot to consider when shopping for pet insurance for your Boxer dog. To ensure that you get the best deal, both in terms of cost and coverage, when shopping for health insurance you should take the time to compare the offerings from several different companies.

The companies themselves do make this easier by providing free, quick online quotes - like the ones we got for Buster and Adrienne - that you can then take away and compare with others at your leisure.

Pet health insurance isn't right for every Boxer. Or, they may not need it right now but it is something to keep in mind as they get a little older.

But it does offer peace of mind to many pet parents - as its increase in popularity demonstrates - and is something that spending an evening looking into may be great use of time for any Boxer dog's pet parent. 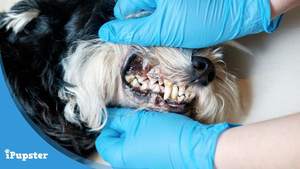 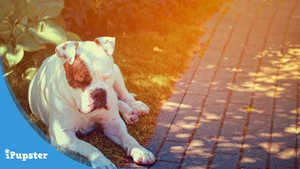 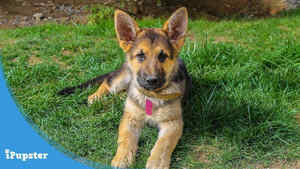