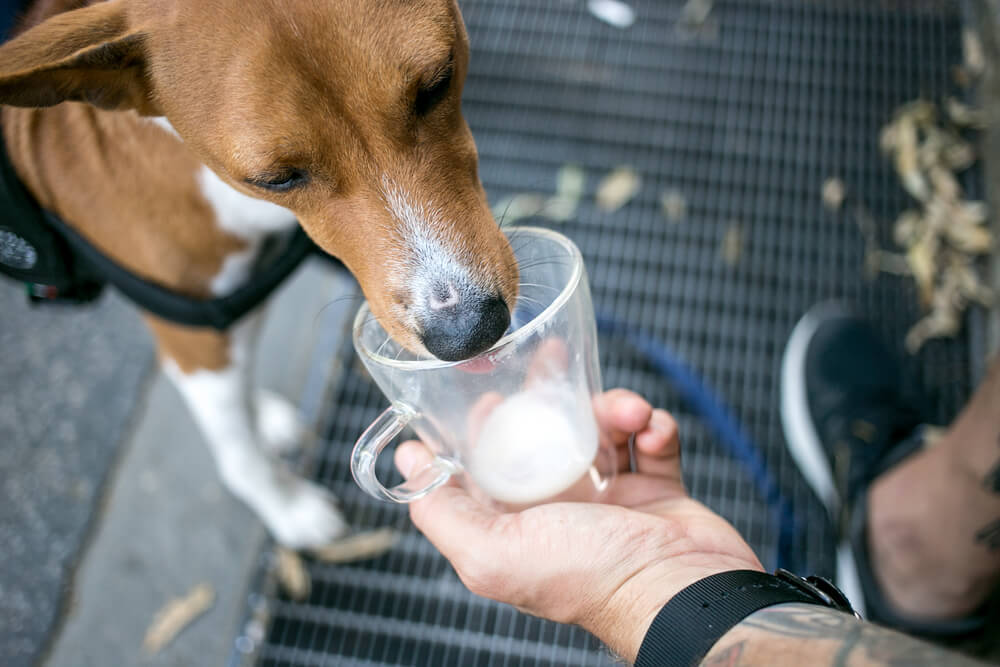 Almond milk, along with a number of other 'dairy alternative' milks are popping up in fridges everywhere, not just in those belonging to the lactose intolerant also people who feel it offers a healthy alternative in general to traditional cow's milk.

That is a different issue, and one we are going to explore in greater detail here.

As it has become more and more popular, the number of different almond milks available on grocery store shelves has increased significantly. Some are heavily sweetened with sugar; others contain an artificial sweetener to add that sweet touch without the extra calories.

Some contain additional flavorings and colors too.

In its most basic form, almond milk - such as the kind you could make at home if you have the time and patience - is simply ground almonds and water blended into a liquid paste that looks a little like traditionally consumed cow's milk.

In this 'pure form' its nutritional value will usually break down as follows per cup of plain almond milk, according to the USDA:

Some critical nutrients found in other types of milk, such as vitamin D, protein and Calcium, are not naturally present in almond milk.

And as we touched on earlier, many almond milk manufacturers sweeten it with sugar, as the taste without it is rather bland and even slightly bitter, something that won't appeal to many tastes.

As a human looking to get the most out of almond milk, you should opt for unsweetened almond milk which has been fortified with minerals like phosphorous, which supports energy levels and bone density, and vitamin D to obtain the maximum nutritional benefit.

But what about your dog? Can she really gain any benefits from drinking almond milk? That's something we are going to take a look at next. 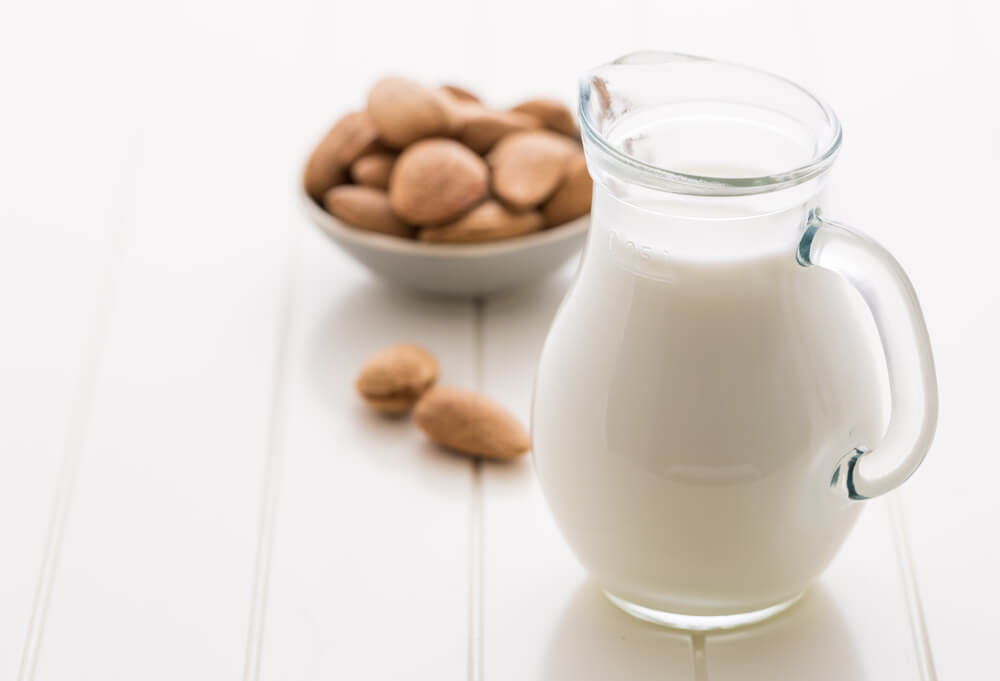 When people talk about the potential health benefits of almond milk especially nutritionists, they are talking about the health benefits for humans. And research into plant-based milks (of which there is not a great deal at this time) is also centered around human consumption.

A dog's body processes many nutrients in different ways to humans, and they certainly have different nutritional needs. Dogs (and cats) don't need any form of milk to be healthy, and even if they're not lactose intolerant (more on that later) vets recommend offering it only as an occasional treat if your pet likes it (which some do.)

Often the health benefits of plant-based milks like almond milk revolve around its low calorie and carbohydrate content when compared to cow's milk. Many people have also adopted drinking almond milk as a matter of conscience or environmental responsibility, which are very different issues to its actual nutritional benefits.

For dogs, some properties of almond milk, in theory, could be good for them. Dogs need adequate amounts of protein and calcium for similar reasons to humans, but they actually usually get all they need from their high-quality dog food.

The vitamin E in almond milk helps dogs with fat metabolism and cell health, but again, a high-quality dog food will usually provide all the vitamin E they need.

In order to gain more benefit from almond milk, a dog would need to be given a fortified version. The difficulty here is almost all of such brands that are readily available are sweetened in some way.

Sugar is not so great for dogs for the same reason as it's not so great for humans: it adds empty calories they don't need to their daily diet and offers no health benefit. Artificial sweeteners are even worse, as some of them are toxic to dogs.

How to Tell If a Dog is Lactose Intolerant

As we touched on earlier, lots of people see almond milk, and other plant milks, as a way to enjoy milk again as they are lactose intolerant/dairy sensitive and avoid traditional cow's milk for this reason.

Dogs can be lactose intolerant too, and often are. They can also be allergic to dairy products, but the two conditions are not the same thing.

Lactose intolerance is fairly common in dogs. Lactose is a sugar, and without enough of the enzyme lactase to break it down properly it can lead to diarrhea, vomiting, excessive flatulence and loss of appetite as a result of all this.

When dogs have yet to be weaned, their bodies contain plenty of lactase to help them digest their mother's milk. The levels drop significantly after weaning, and in adult dogs are often low enough that digesting any lactose properly can be hard.

Dairy allergies are different. An inability to tolerate the protein in cow's milk causes a canine allergy to dairy products (rather than the sugars). This can be far more serious, therefore it's critical to identify it early.

Some of the symptoms of dairy allergy in dogs are similar to lactose intolerance, but others are not. A dog with a dairy allergy will, on average, have a more serious reaction to eating the food than a dog with dairy intolerance.

The symptoms of dairy allergy in dogs include:

If your dog develops hives after drinking milk or eating dairy, and certainly if they have breathing difficulties, it's a serious emergency, and they should be seen by a vet as soon as possible.

Which Almond Milk Products Can Dogs Have?

Almonds in themselves can be problematic for dogs.

Although not technically toxic in small amounts they can pose a choking hazard, and they are high in fat, which most dogs who are fed a high-quality dog food don't need any more of.

Levels of obesity in dogs are increasing right alongside those in humans, and so ensuring your dog maintains a healthy weight, which is your responsibility, is a must.

As we have already covered, sweetened almond milk is a definite no-no, and dog don't need cream of any kind, including those tasty almond milk creams that are popping up in dairy cases. These are loaded with sugars or sweeteners, neither of which are good for dogs.

Yogurt is sometimes touted as a healthier alternative to ice cream for dogs who seem to have a sweet tooth. There are an increasing number of almond yogurts available for humans, and, if they are completely unsweetened, they would be unlikely to harm your dog.

But dogs don't need yogurt to be healthy, so adding it to their diet won't give them any additional health benefits, only even more calories they just don't need.

Can Almond Milk Cause Digestive Disorders in Dogs?

Almonds are, as we’ve mentioned, high in fat, so may cause gastric intestinal distress in any dog, even in their 'milk form'.

How Much Almond Milk Is Safe for Dogs?

Dogs really don't need milk at all, including almond milk.

However, if your dog seems to like it and isn't showing any signs of intestinal distress - maybe they are always trying to get a taste of yours - for most dogs the occasional small dish of unsweetened almond milk is okay.

How To Choose the Best Commercial Almond Milk

Head to the cold case at the grocery store and you'll be faced with all kinds of almond milk choices. The only commercial almond milk you should consider sharing with your dog is one that is completely unsweetened.

If you can find an almond milk that is both unsweetened and fortified with those extras we mentioned earlier, it would be even better.

Blue Diamond Almond Breeze - Unsweetened Original is a good example of such an almond milk. It also offers the advantage of being shelf stable, so you don't need to refrigerate it until it has been opened.

How to Make Your Own Almond Milk

To ensure there are no added sugars or any other ingredients in almond milk that are less than great for you and your dog, you can try making your own. This is a simple, if time-consuming process, but it will ensure you know for sure what's gone into the milk you share with your dog.

If your dog likes oatmeal, you could replace any water/cow's milk with almond milk if you'd like, which may be helpful if your dog is lactose intolerant.

Almond milk is far from the only plant-based milk choice you have, but how about your dog? Most plant milks are OK for dogs - many seem to be particularly intolerant of soy milk though - but any plant milk you offer should only ever be as a very occasional treat and should never be sweetened.

If your dog has drank commercial almond milk and he is acting abnormally or suffering allergy-like symptoms, be sure to call your vet, emergency clinic, or animal poison control center right away.