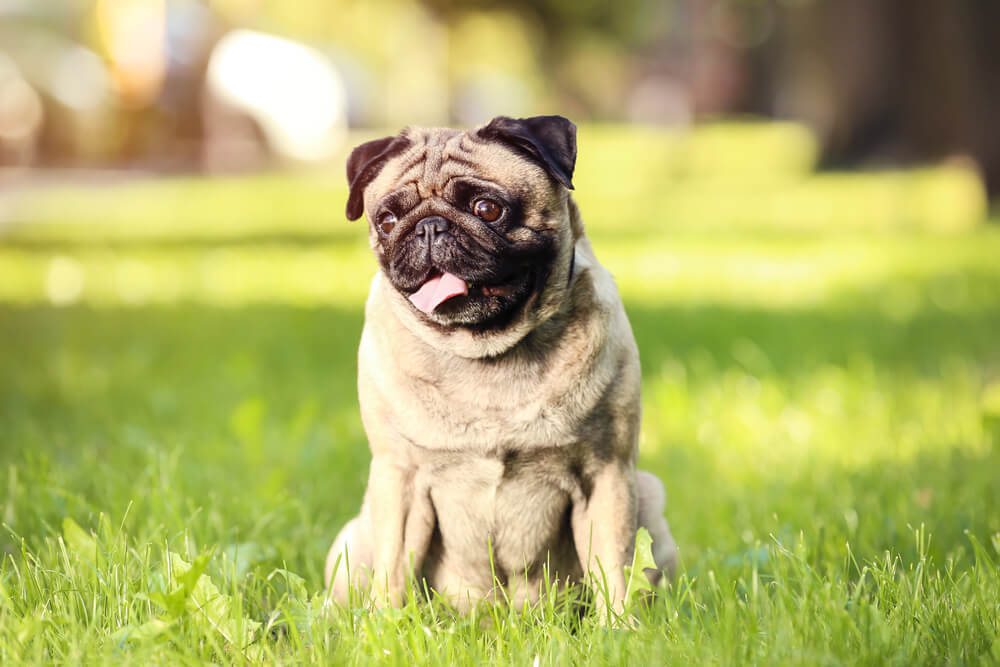 There are lots of good reasons people consider choosing a small dog breed, from their reduced exercise needs to the fact that their size better suits them to apartment living.

Many breeds of small dogs have also often long been considered lapdogs, pups who love to sit and cuddle with their owners.

But which are the most affectionate small dog breeds? That is what we are going to take a closer look at here. 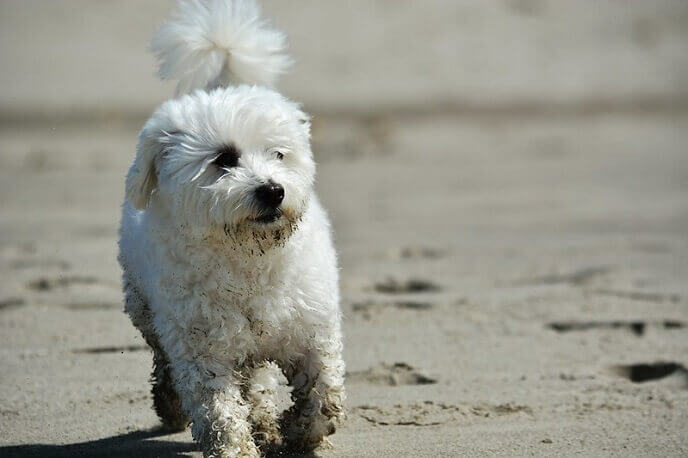 The Bichon Frise is a delightful friendly little dog that was bred expressly to be a companion. His slick array of stunts made him an ideal carnival dog because his duty was to entertain. Today, he's more likely to be found entertaining his family at home.

He used to be adored by royalty and performed tricks to the roars of the crowd, so, it's not a surprise that he enjoys being the focus of attention. He is petite, fluffy and while very lively does not demand long walks.

While the Bichon Frise makes a snugly family pet, it is not a good idea to have one around very small children though, as they are delicate pups that can be easily hurt, but they do usually love kids, so once yours are old enough to understand how to behave around dogs a Bichon Frise will practically become their shadow.

The hypoallergenic Bichon Frise is the ideal dog for people with dander allergies. 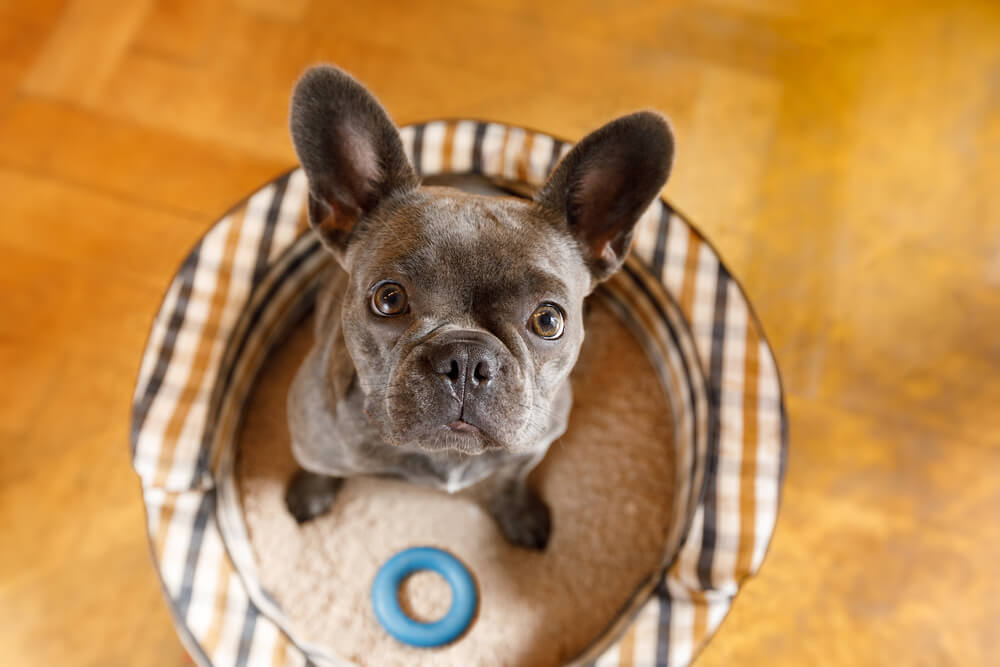 The French Bulldog has become the fourth most popular dog breed in America, and for lots of good reasons. French bulldogs are adorable, loving pups who make excellent pets.

Although they are similar to a conventional bulldog in many aspects - simply smaller - their characteristic bat ears set them apart, and they are a breed that does not require a lot of exercise but is extremely gregarious.

Like other brachiocephalic dog breeds (which means flat faced) French Bulldogs can be prone to respiratory issues.

It's worth noting that not all French bulldogs suffer from breathing issues as a result of that adorable little snout, and some only develop them later in life.

Those who take a few preventative measures can frequently ensure that whatever problems they do encounter are not too serious. 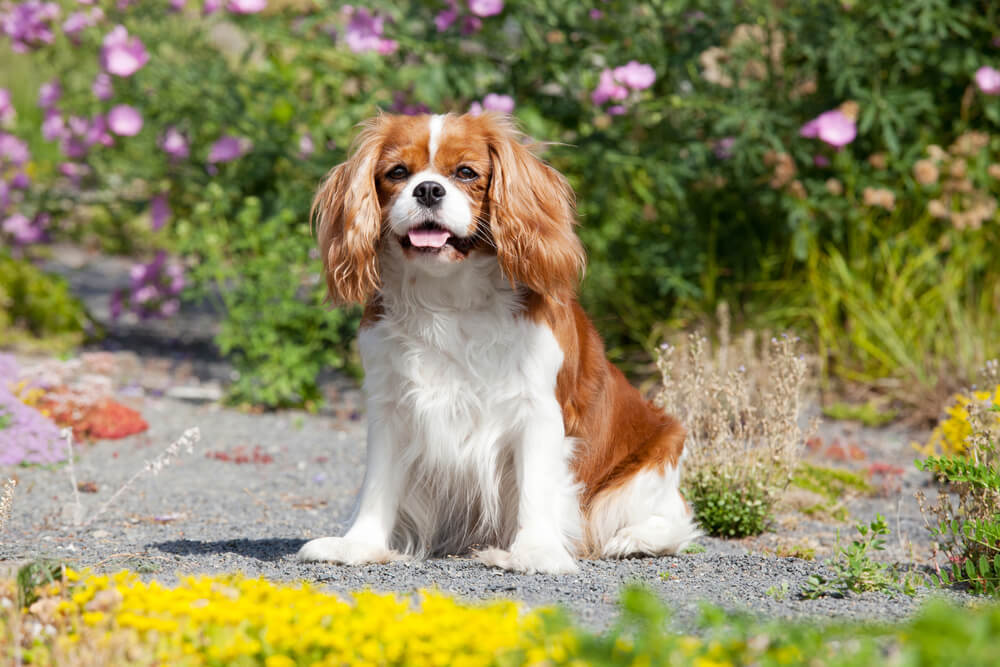 The Cavalier King Charles Spaniel is an endearingly friendly, energetic, and intelligent little dog who repays his owner's care and attention with endearing loyalty.

They make fantastic companions, probably thanks 400 years of close interaction with their owners and evolution as lap dogs.

They are joyful, outgoing, loving little dogs who want to love and be loved, run and play in a safe environment, and sleep in a nice bed - preferably your bed. They get along with other dogs, cats, and children.

Cavalier puppies do not thrive if they are left alone all day without human or animal companionship.

They are incredibly bright and require constant and loving discipline in the same way that a human child does and are almost a textbook definition of a 'fur-kid'! 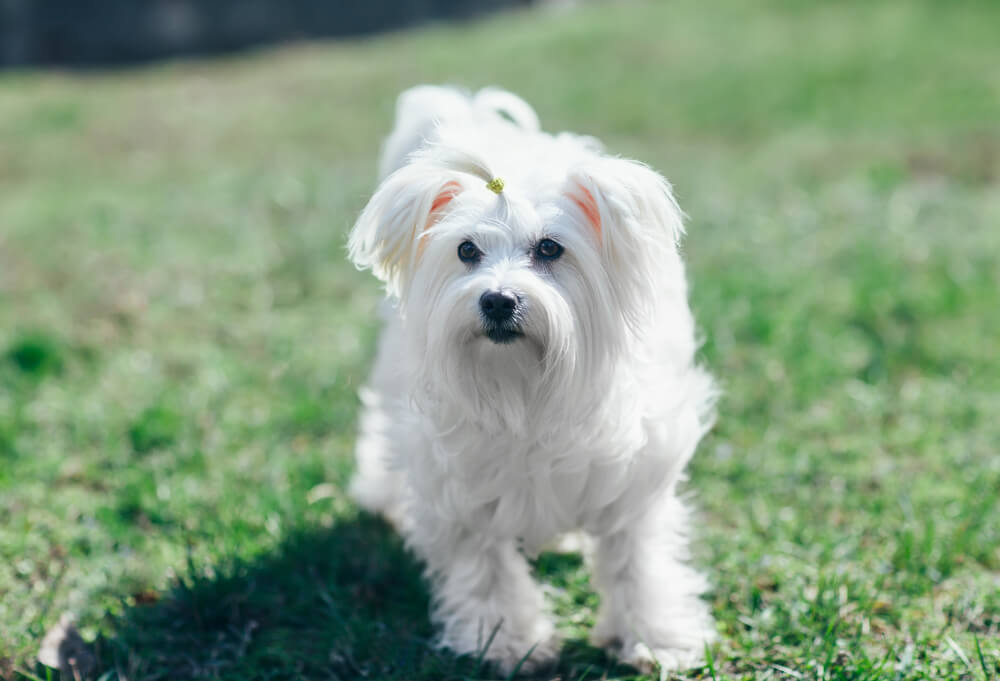 The Coton de Tulear is a vivacious, affectionate small dog known for his soft, fluffy coat and named after the city of Tulear in Madagascar, where the breed originated.

The Coton enjoys cuddling with his owners, yet he's usually easy to teach and always up for a good time.

He's a good choice if you want a small dog who can also participate in active dog sports and his intelligence makes him easy to train to master many of them. This does mean however that he will prefer a little more exercise than many other small dog breeds.

This is a dog who requires a lot of grooming to keep his lovely, coat looking great.

He is a laid-back little pup who is fine to live with a family with kids as long as they are supervised when petting him. He also gets along with other animals, especially cats. 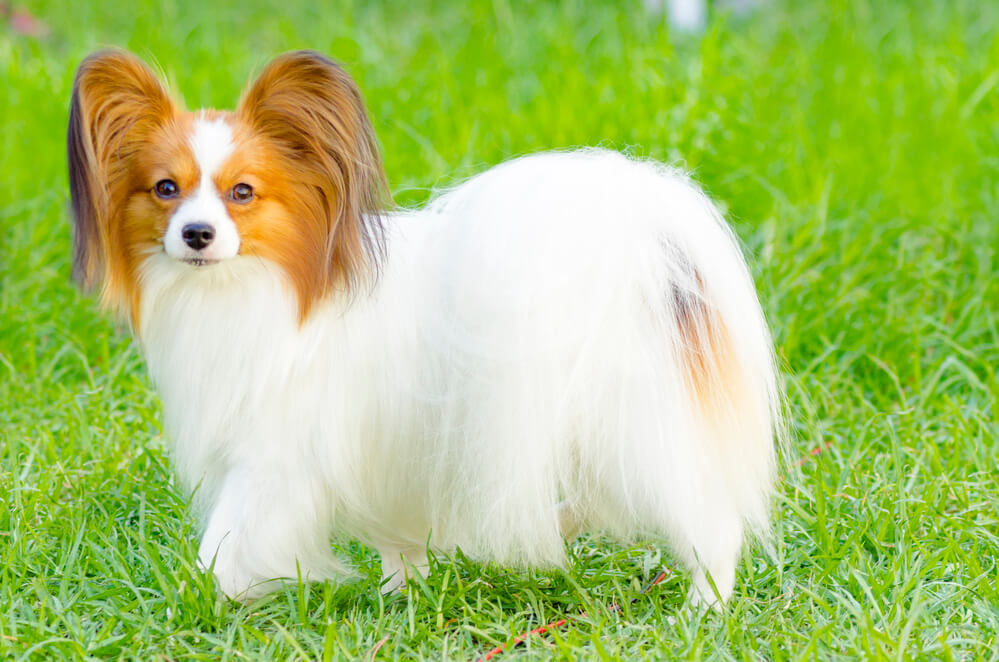 The Papillon, whose name is derived from the French word for butterfly, is a living portrait, a modern descendant of the little spaniels frequently shown in art from the past.

The dwarf spaniel, as he was formerly known, has evolved slightly in look throughout time, but he remains the same beautiful pet that once graced the laps of queens and kings.

The word papillon relates to the dog's fringed erect ears, which resemble the outspread wings of a butterfly. The phalene, which means "moth," is a drop-eared variation of the breed.

Although they are classified as lapdogs, and the Papillon does like to snuggle, they are also very lively, playful pups who do like to get outside and play.

Often very amusing is the Papillon tendency to act as a guard dog for his pack (aka his human family.) When they do so, they act very fierce, apparently unaware of the fact that they only weight 7 to 10 pounds! 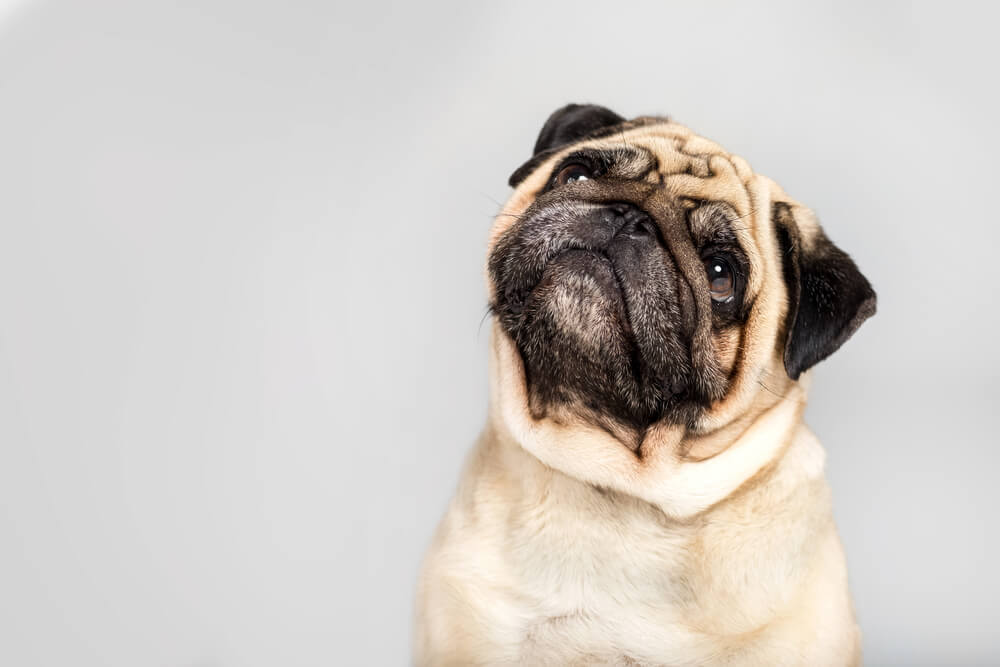 Pugs are well-known for their squishy features and endearing personalities. This breed is great for laid-back households and those who love to spoil their pets. Pugs can be a little naughty but intelligent enough to be trained out of their mischievous behavior.

Pugs make excellent house dogs because of their calm demeanor and affectionate nature. You'll need a good vacuum for pet hair, though, because they shed a lot!

Pugs are playful but don't require a lot of exercise, so they're happy to do anything their owners want, whether it's watching a movie or taking a walk around the block.

While Pugs can be effective watchdogs, they aren't known for being "yappy," which will be appreciated by your neighbors. They get along well with other pets and children if they've been properly trained and socialized.

These small affectionate dogs do snore and slobber though, so you'll need to be prepared for that. 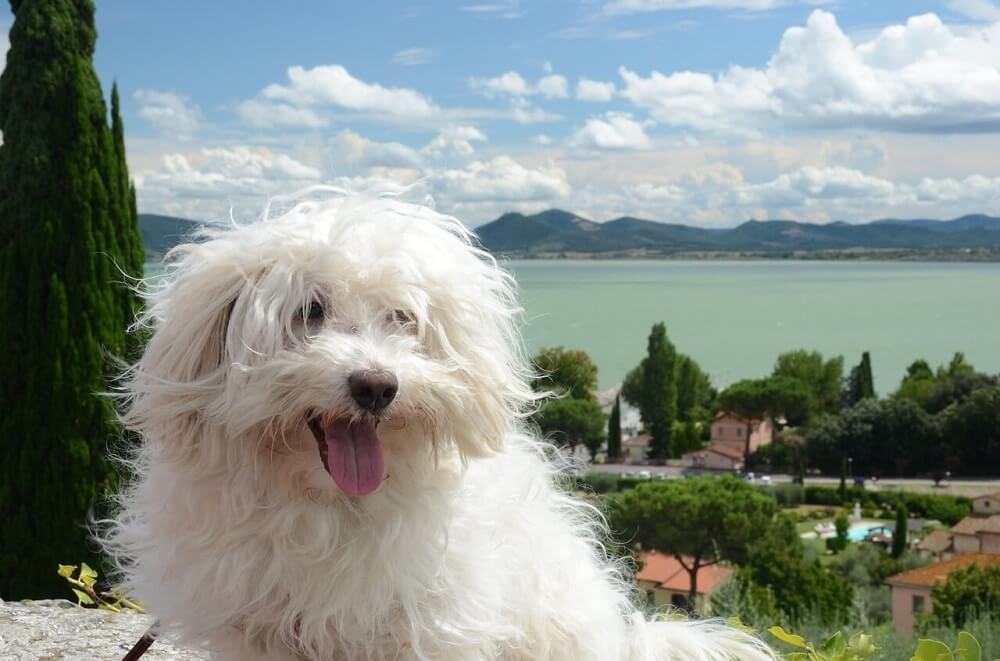 We're not talking about the delectable Italian sauce here, although both the pup and the sauce originated in the same Italian city. The hypoallergenic Bolognese is a small white dog with curly hair, similar to his relative the Bichon Frise.

Unlike the Bichon, the Bolognese's hair is long and wavy, giving him the appearance of a fairy tale dog who has fallen on hard times. He will need plenty of careful grooming to help ensure he does not end up looking too down on his luck!

He's a very affectionate and loving dog breed who's never happier than when he's in your lap, despite being shy at times around strangers.

If they are not trained out of it, a Bolognese pup can be quite yappy, and they require careful handling as they are small and delicate, so may not do well in a home with very little kids (although they do love them). 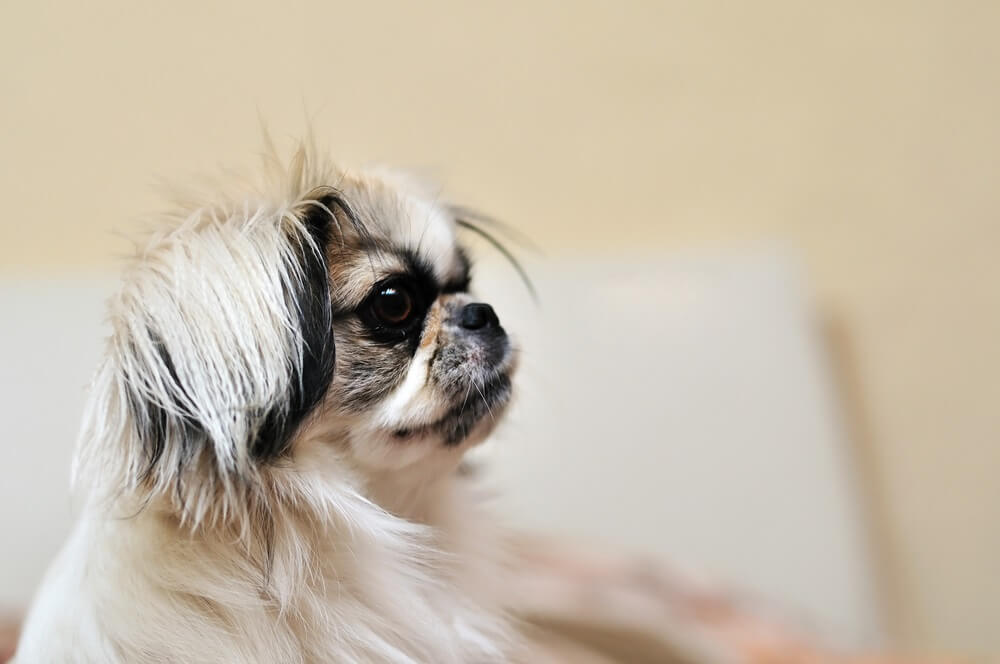 A small, sometimes stubborn, but always very loyal and loving dog, the Japanese Chin does have his roots in Ancient Japan, although in his modern form, having been crossed with spaniels by British breeders in the 19th century, his face is wider and rounder than some other Oriental pups.

The Japanese chin is a calm loving dog breed who enjoys being in the company of other calm people and pets.

They have a feline-like reputation, making them the ideal dog for someone who fancies themselves a "cat person" but desires canine companionship.

The perfect calm and cuddly dog breed compared to the others on our list. 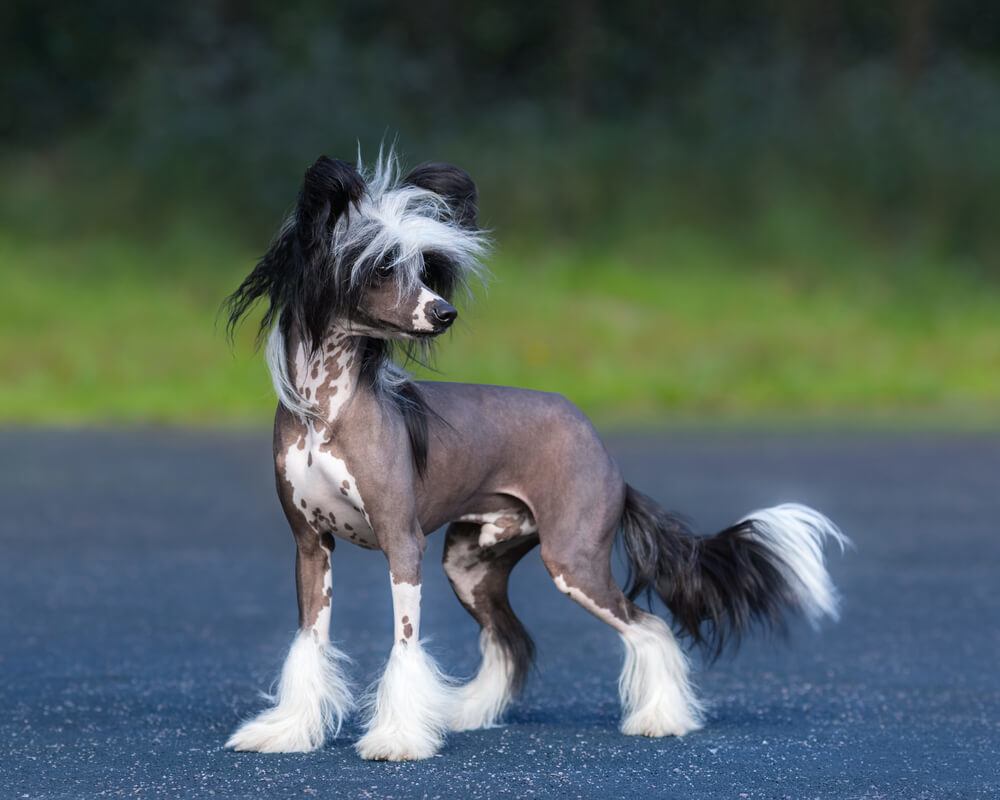 The Chinese Crested is a mischievous pixie, a loving lapdog, and a sensitive companion all rolled into one. He is loyal to his family and eager to please; he also gets along well with other dogs, cats, and strangers.

The Chinese Crested likes to run and play but won't demand long walks or a lot of strenuous exercise. No matter whether they have hair or not, Chinese Crested pups hate the cold, and will need a big thick sweater when they go out in winter.

Despite his name, the Chinese Crested - which comes in both hairless and short haired varieties - did not originate in China.

The ancestor of the modern Chinese Crested, which was of the hairless variety, was discovered in Africa and brought to China in the 13th century and gifted to the royals of the time, beginning their long history as a lapdog. Chinese Crested are hypoallergenic so they do well for people with pet allergies. 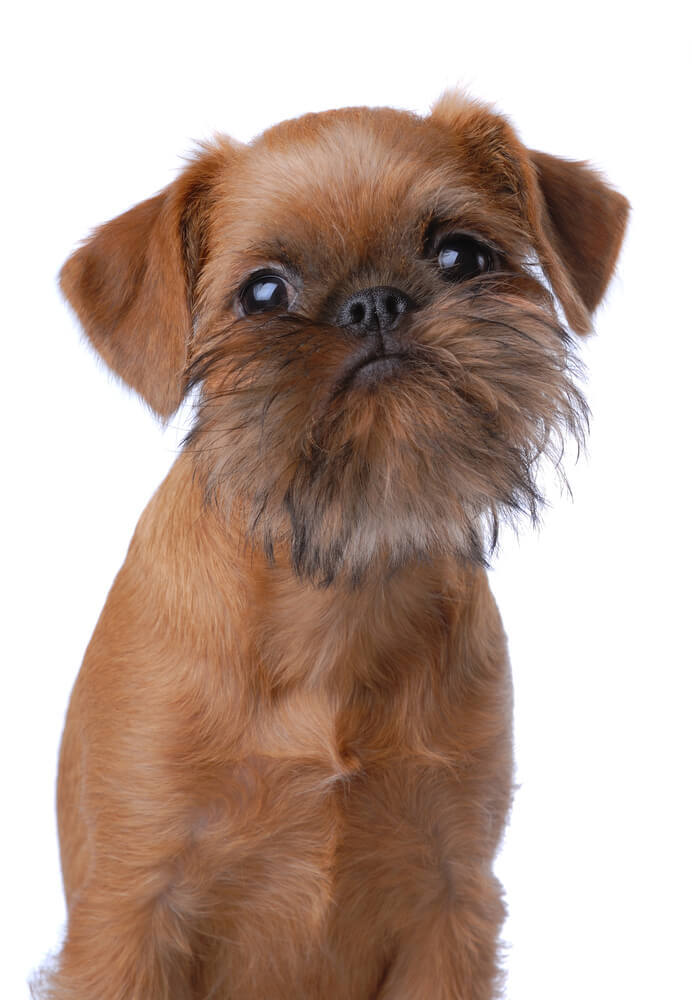 For those looking for an affectionate small dog with a lot of energy, personality and a sometimes amusingly defiant attitude, the Brussels Griffon may be perfect.

This breed is an amazing choice for allergy sufferers since their coat sheds very little.

Their slightly squashed, pug like faces often look quite grumpy, but they themselves are not, and they make good companions in family households, especially as they love children and can keep up with the most energetic toddlers. Because of their small size they do need to be handled with care though.

Brussels Griffons are so fond of company they are likely to suffer from separation anxiety if left alone for too long and do best in a household where there is usually someone at home.

Owners should avoid babying this breed since they can suffer from Small Dog Syndrome which if ignored it can escalate to destructive behavior, problem barking and other issues.