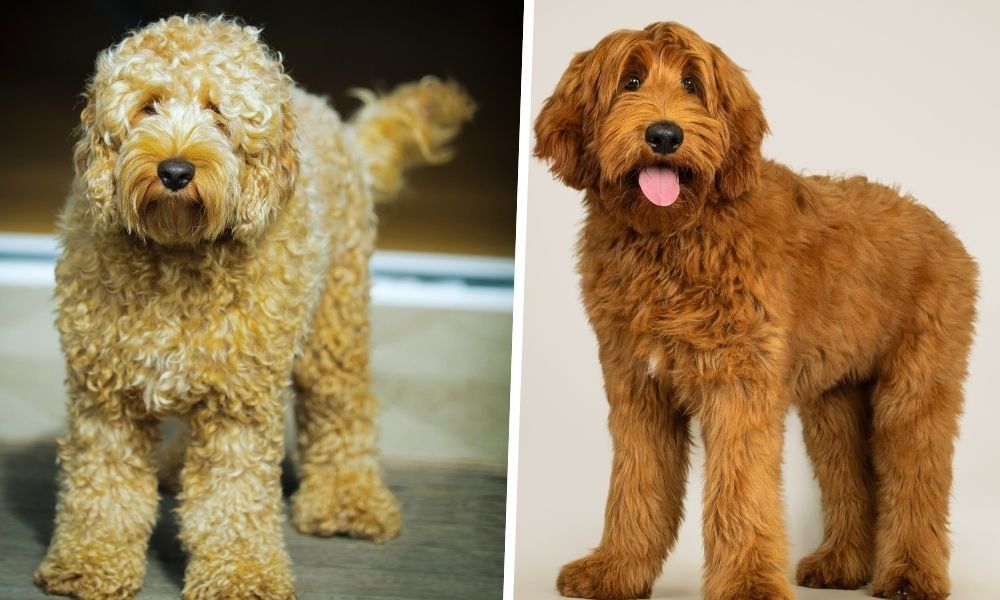 Have you ever noticed how similar some dog breeds seem to be? With so many variations and mixing of breeds over the years, it can be hard to tell some doodle dogs apart!

For example, the British Labradoodle only uses two breeds, the Poodle and the Labrador. However, the Australian Labradoodle uses up to four breeds.

Two dog breeds that are often confused with one another are the Labradoodle and the Cobberdog.

Both are lovable, curly-haired pooches that can fit into just about any family. Cobberdogs are a bit more complex with their breeding and may use up to 8 breeds.

So, how do you tell the difference between these two breeds?

For a start, the breeding criteria between the two are quite different, with the Cobberdogs being stricter. There are other differences that set these two breeds apart, so read on to find out more about these two beautiful dog breeds.

The coat of a Labradoodle comes in a range of colors, including all black, red, a golden apricot, a tan and black mix, blue brindle, caramel, or any combination of these colors.

They can have textures that are wooly, curly, wiry, wavy, or fleece-like (like sheep). The fur length also ranges from short to medium.

Labradoodles have big floppy ears, a muzzle and face that is fuzzy, wide-set expressive eyes, a chest that is compact, and strong muscular bodies.

There are a variety of sizes that Labradoodles can come in, and this is down to the size of the Poodle breed that is used in the breeding process. 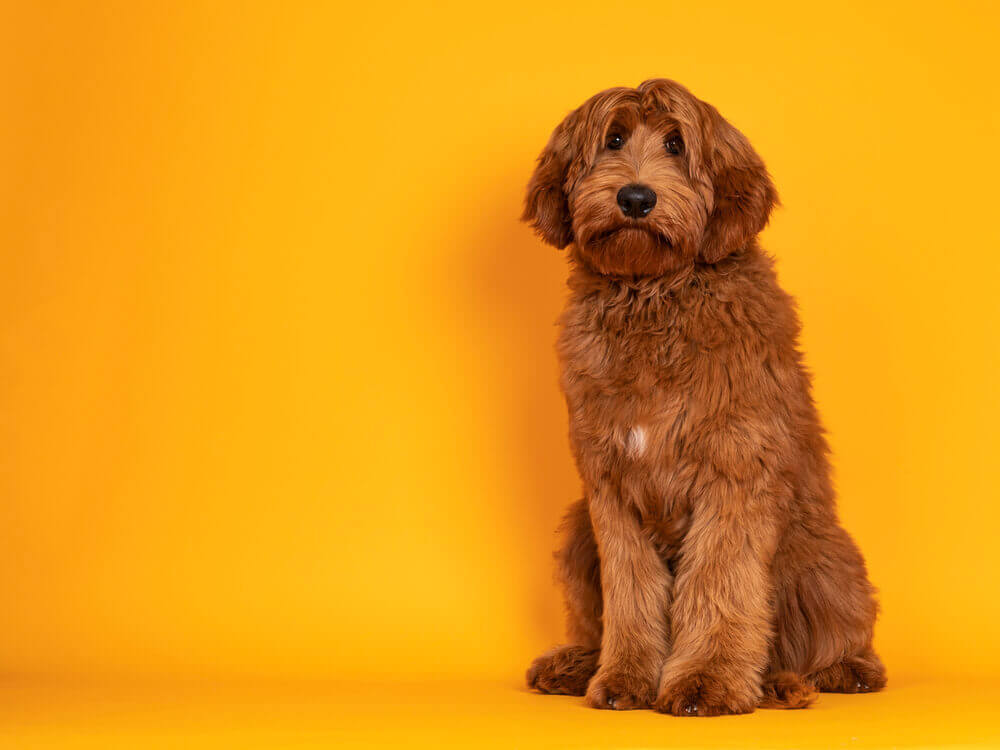 Cobberdogs have an abundance of fur that can come in a wavy or curly texture with fur that is very soft.

Their coats come in a range of colors, including black, raven, brown, silver, coffee, gold, blond, shades of rose, lavender, merle, parchment, red, blue, or a mix of these colors.

The head and face are slightly square and they have large rounded eyes. They have a broad short muzzle and floppy ears. They have a strong muscular body and are graceful and light on their feet.

Like the Labradoodle, they come in a range of sizes, depending on which breeds are mixed.

What is the Difference Between a Labradoodle and a Cobberdog?

Here is a quick comparison between the Labradoodle and the Cobberdog:

Let's compare the different aspects of these two breeds side by side.

The Labradoodle, which is a cross between a Poodle and a Labrador, was originally created by Wally Conron in 1989. He bred dogs for the Royal Guide Dogs Association of Australia and wanted to create a guide dog that was also hypoallergenic for a lady who was blind and whose husband had a severe dog allergy.

While the breeding of the Labradoodle became popular in 1989, it is believed that their origin goes back to 1955, The reason for this is a mention in a book, written by Sir Donald Campbell, mentioning the breed.

The Cobberdog originated in Australia and was created to bring the hypoallergenic and gentle temperament of the Labradoodle back to its origins.

With so many breeders mass breeding the Labradoodle, the qualities were becoming lost over generations. Cobberdog means “dog Friend” and its gentle nature has made it the perfect breed for use as assistance and therapy dogs.

It was mentioned earlier that the breeding standards are stricter for Cobberdogs. Every dog that is used for breeding the Cobberdog must be registered with the Master Dog Breeders & Associates (MDBA), so there is total control regarding who can breed Cobberdogs.

The Australian Cobberdog is known for its even temperament, affection, and its attentiveness to humans, which is what makes them perfect as therapy dogs. They are trusting, happy, and sociable dogs who aim to please. They can also be a bit goofy and mischievous and are non-aggressive.

Labradoodles can have a bit of a nervous temperament as a result of breeders using a Cocker Spaniel parent. However, most are very sociable, intelligent, and playful. The temperament of the Labradoodle has been likened to that of a child.

Because the Labradoodle has been so widely bred, the price for a puppy through a recognized breeder can range between $500 to $3,000. You may also find Labradoodles in shelters for as little as $100.

Australian Cobberdog pups are much more expensive as a result of their regimented breeding standards. They start from $3,000 and can cost as much as $10,000 from a respected Coberdog breeder.

It's highly unlikely that you will come across a Cobberdog in a shelter.

Labradoodles were bred for their hypoallergenic and low shedding fur due to them having wavy or curly coats. However, some straight hair coats will shed a bit more.

Labradoodles need to be brushed daily to prevent matting and tangling. You should also have their coats professionally washed and cut every 6 to 12 weeks.

The Cobberdog also has hypoallergenic fur and is low to non-shedding. Their thick, curly/wavy coats need to be brushed at least once a week to avoid matting and tangling and they should have their fur professionally cut and washed every 6 to 12 weeks.

Of the two, the Cobberdog requires a bit less time where grooming is concerned.

Of course, there are other factors that will determine the lifespan of the dogs, mainly health and care.

These two breeds are very intelligent and both can be trained rather quickly, with the ability to learn many tricks. It's because of their fast ability to learn that has made them perfect to train as a guide, service, and therapy dogs.

While both breeds can have that bit of a mischievous side, this is something that can be fixed if training starts as a puppy.

Labradoodles are considered to be medium barkers. They bark when they feel they need to tell you something, want food, attention, or feel frustrated. They may bark when left alone or when out on walks.

Cobberdogs, on the other hand, are not big barkers, even when they have been left alone or are seeking your attention.

The only time Cobberdoodles seem to bark is when they have been startled by a noise or person.

All dogs need the right amount of exercise.

Labradoodles will need at least an hour of exercise per day. This can be broken down into 30-minute intervals. Aside from walks, they need to be able to play around the home and will do well if they have a yard to run around in.

Cobberdogs also need at least an hour of one-on-one exercise time, whether this is done as a walk, romping in the yard, or taking part in fun activities.

The difference is that the Cobberdog also needs mental stimulation. They can become bored quickly but teaching them new tricks is one way of giving them the mental exercise that they need.

The energy of a Labradoodle is like that of a toddler, so they can keep up with children of any age in the home. Their natural affection and gentleness make them good companions for children.

However, their natural exuberance is something to watch out for around smaller children, which they may easily knockdown.

Labradoodles tend to get along well with other pets and dogs, as long as they have been properly trained and socialized to be around other animals. As a puppy, they shouldn't be left alone for more than 8 hours.

Labradoodles can be prone to separation anxiety that can result in destructive behavior if left on their own for long stretches.

Cobberdogs also get along well with children and other pets. Their gentle nature and ability to be attentive to the needs of their humans make them great playmates and help keep kids active.

Their intuitive nature allows them to get on with children of all ages. They are quite friendly to all types of pets, but especially to other dogs.

Even with good breeding, Labradoodles can be prone to some health issues.

Labradoodles are prone towards:

Cobberdogs are less prone to health issues due to their careful breeding standards. In fact, DNA testing and monitoring allow breeders to spot any genetic health issues in the dogs used for breeding.

Dogs found to have issues are removed from the breeding pool. These standards are what have made Cobberdogs one of the healthiest and most disease-free breeds.

Labradoodles, as active as they are, can pile on weight if their diet isn't monitored. They need food that has the right amount of vegetables, protein, fats that are healthy, and ground bones.

They should be fed 1 cup to 2.5 cups of good quality dog food a day, broken down into 2 feedings. The amount will depend on the size of the Labradoodle.

It is not advisable to feed them one big meal a day because it can cause them to bloat.

Pro Tip: We go more in detail about what foods to feed a Labradoodle in our article about a Labradoodle's diet.

Cobberdogs will generally not eat more than they need to, so aren't prone to gaining weight when kept on a healthy diet.

They require the same minerals, protein, and vitamins that a Labradoodle does.

How much will depend on the size of your pet, but 1 to 2 ½ cups per day, broken down into at least 2 feedings to avoid bloating, is the recommended amount.

Labradoodle vs Cobberdog: Which Dog Is Best For You?

Labradoodles are a good choice for families and first-time dog owners because they are easy to train. They aren't very high maintenance when it comes to grooming and shedding and is good for those who have allergies.

Labradoodles are also pretty adaptable for many lifestyles, however, they do best if you have the space to let them run around and the time to give them the proper amount of exercise and playtime they need. They make perfect companions for the outdoors type of family too.

Australian Cobberdogs are pretty adaptable too and may do ok in an apartment environment, as long as they are getting the exercise and mental stimulation they need. They need close human contact, so may not be the best choice if you are out of home quite a lot and have to leave them on their own.

Their extremely affectionate and attentiveness makes them the perfect match for special needs children and for those who need a support dog, as well as making a good companion for the elderly.

They are easy to train and require even less maintenance than a Labradoodle when it comes to grooming. They are a good choice for first-time dog owners as well.

Out of the two breeds, the Cobberdog is the easiest to care for. They bark a lot less than a Labradoodle and can entertain themselves with their toys when left on their own. They have that natural empathy that makes them great around kids and other pets. They also seem to have a knack for knowing who needs help and when.

Their ability to adapt to any environment also adds to making them easier to care for. Their non-aggressive means they won't bite and, even when they are puppies, they don't really have a tendency to chew or destroy things in the home.

Whichever breed you choose to make part of your family, make sure that you get them from a reputable breeder.

Also Read: Sheepadoodle vs Labradroodle: What is the Difference?