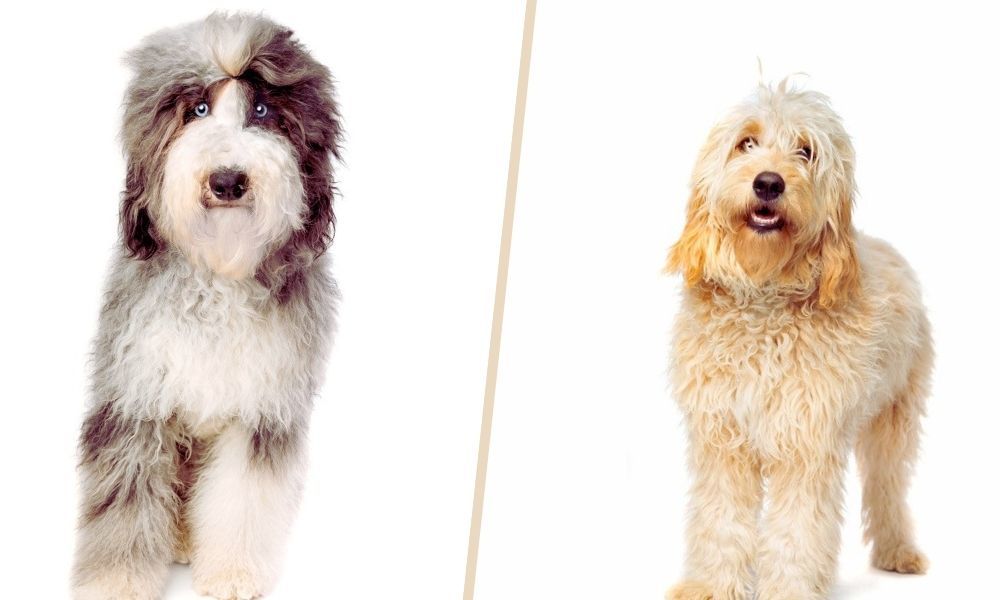 Who doesn't love a Doodle dog? You get the qualities of a Poodle mixed with another chosen breed, like Golden Retrievers and Old English Sheepdogs.

With so many Doodle mixes, it can be hard to choose which Doodle breed is the best fit for your family, and there are many things to take into consideration.

Out of the Sheepadoodle and Goldendoodle, which breed is the best match and how are they different from each other?

Both the Goldendoodle and the Sheepadoodle are a hybrid breed, as mentioned above. The Goldendoodle is more popular and has become a household breed.

They are used as emotional support pets, service dogs, and guide dogs. Sheepadoodles are a bit newer and have been labeled as a “designer dog”. Both are fairly large dogs that love to play and run around.

When adopting or buying a Sheepadoodle or Goldendoodle puppy, your best bet is to purchase one from a reputable breeder, who will be able to tell you about the qualities of the parents that the pup was bred from. Let's take a closer look at these two breeds.

Some of the similarities between these two breeds are their longer and denser coats, beards and mustaches, and long eyebrows, all of which give these two faces that resemble a fluffy teddy bear. 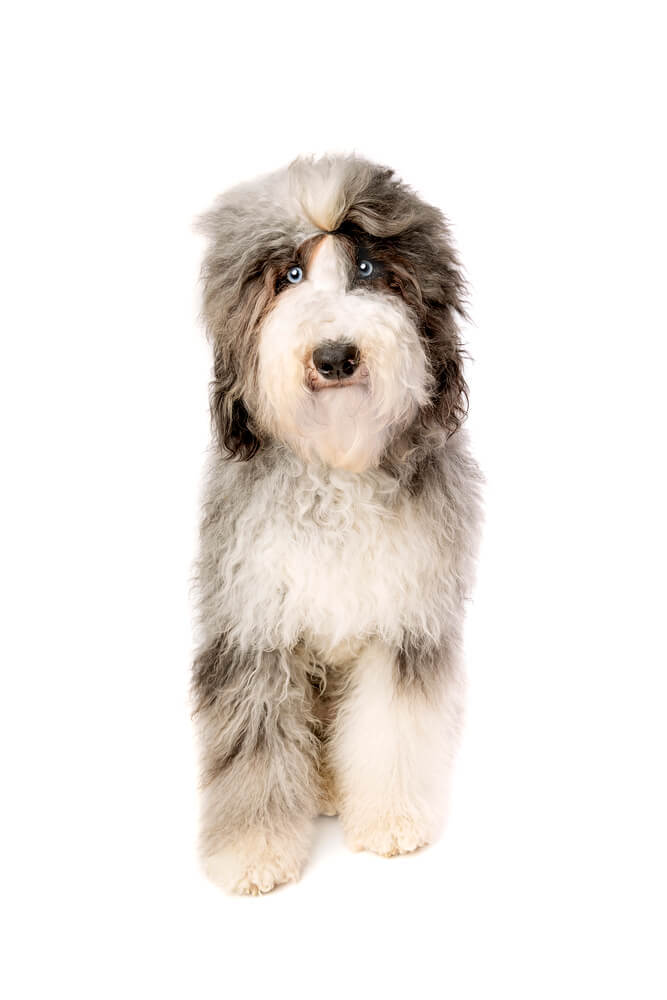 You’re lookin’ at a Sheepadoodle who can strike a pose.

They tend to have coats that are a mix of black and white or chocolate brown and white, or solid gray or black. Their long dense coats are commonly wavy but can also be curly or straight. They are part of the working breed group of dogs.

They can either take after their Poodle parent or Sheep Dog parent in the looks department, having either a square-like face or a domed head.

They have shaggy faces, fluffy paws, and large floppy ears. Their bodies are strong, muscular, and well proportioned.

Exactly how big are Sheepadoodles?

One thing that Sheepadoodles are known for is their large size, which is comparable to the size of a Great Dane. However, this will depend on the type of Poodle that has been used to breed the Sheepadoodle pups.

The standard Sheepadoodle is the larger of this breed, weighing up to 85 pounds and standing up to 27 inches high. Then you have the Moyen Sheepadoodle, which is bred with a Miniature Poodle and Old English Sheepdog. This type will weigh up to 55 pounds.

There are also Toy Sheepadoodles, which use a Toy Poodle as part of the breeding process and these dogs can weigh up to 35 pounds.

Sheepadoodles tend to stop growing at around seven to eight months old. From there, they begin to put on weight around their chest and hip areas.

There are actually four generations of the Sheepadoodle: 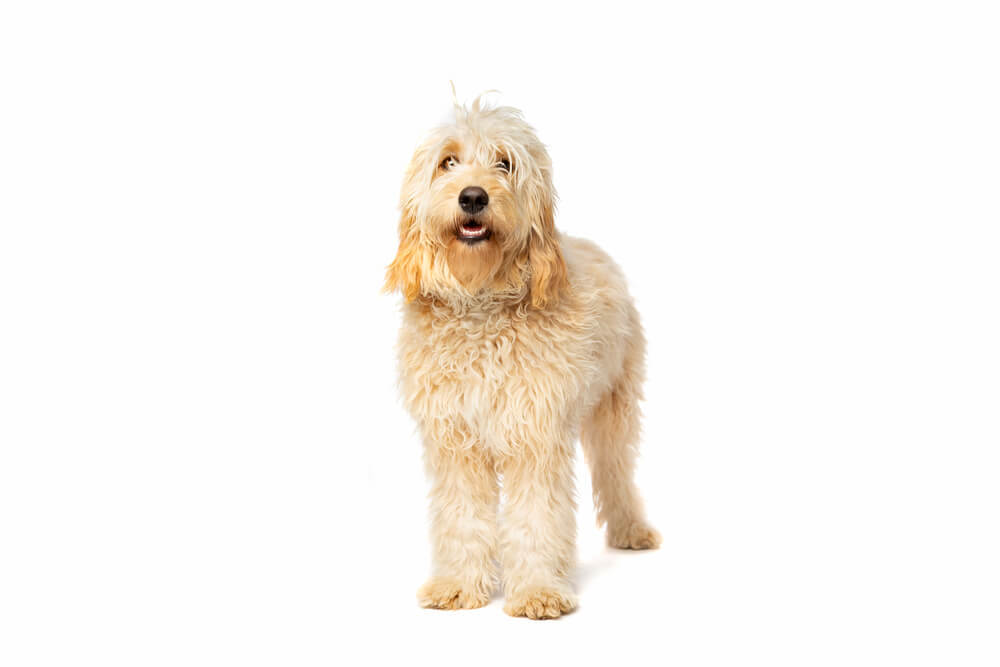 I am a Goldendoodle and I love cuddles.

Goldendoodles, also referred to as Groodles in Australia, are a mix between Poodles and Golden Retrievers. Since Poodles can come in a range of sizes, from miniature to standard, so will a Goldendoodle.

Their coats tend to come in solid colors of red, cream, black, apricot, and chocolate brown. Some can also have a mix of these colors.

Their long dense coats can be wavy, straight, or curly. Their hair is longest around the tail, legs, ears, and body.

Goldendoodles tend to have a bit of a goofy appearance, keeping their puppy-like look well into adulthood. They can weigh anywhere between 50 to 90 pounds and stand between 20 to 24 inches high.

They have broad muzzles, drop ears, rounded skulls, oval-shaped eyes, and tails that are heavily feathered. Their body is muscular and long, with a wide stance and deep chest.

What is the Difference between a Goldendoodle and a Sheepadoodle?

Goldendoodle vs Sheepadoodle: Similarities and Differences

Let's compare these two crossbreed balls of fluff side by side.

The history of the Sheepadoodle can be a bit murky. They started to become popular during the 1990s. However, some have speculated that they were being bred as working dogs during the 1960s by the U.S Military.

Their Old English Sheepdog ancestors were bred as far back as the 1700s in the west of England.

While Goldendoodle breeding became popular in the 1990s, in both Australia and the USA, it was first bred in 1969 as a guide dog.

One such breeder was the great-granddaughter of Charles Dickens, Monica Dickens. Breeders began producing Goldendoodles as an alternative choice to the Labradoodle.

Poodle mixes tend to have a calm and kind disposition and have often been bred as service dogs. They are also very intelligent and active, traits that were passed down to both Sheepadoodles and Goldendoodles.

Sheepadoodles also share traits from Old English Sheepdogs, such as their gentleness, adaptability, and intelligence. They are quiet, energetic, playful, and affectionate in temperament.

The Goldendoodle shares traits from its Golden Retriever parentage, which includes loyalty, friendliness, enthusiasm, and intelligence. Both breeds love cuddles and attention.

Which doodle is the calmest?

Out of the two, the Sheepadoodle tends to be the calmer of these two breeds, with a more laid-back personality and their ability to adapt to most situations quite well. They still love to romp around and play, but in the home, they tend to be quieter.

Both breeds are very popular and can be a bit on the expensive side. A Goldendoodle pup will cost around $1,200 when purchased from a reputable breeder and there can sometimes be a waiting list.

Sheepadoodle pups can run from between $1,000 to $3,000 from a reputable breeder. While it is very rare, you can sometimes find one of these breeds in a shelter for about $500.

Always make sure you are buying from a licensed and reputable breeder. This way you can be sure that you are getting the best traits from both parents.

Both the Sheepadoodle and Goldendoodle have coats that are considered to be hypoallergenic. They both shed less than other breeds, which makes them a good choice for anyone who has allergies.

They are also both high maintenance when it comes to grooming because of the type of coat they have.

The curlier the coat, the more you will need to groom them, otherwise, their fur can get matted and result in them needed to be shaved.

They should be brushed daily and taken to a groomer every 6 weeks to have their hair and nails trimmed.

It isn't recommended that you bathe these breeds at home unless you are able to blow dry them fully. Towel drying can lead to matting of the coat.

On average, Sheepadoodles can live between 12 to 15 years and Goldendoodles can live for 10 to 15+ years, which is quite good for larger dogs. Smaller versions of these breeds (using a miniature Poodle) can live a bit longer than this.

Both breeds are very intelligent, making them very trainable because both breeds love to please their family and they are pretty motivated. They learn quickly as puppies, with some only taking a few weeks to become housebroken.

Positive reinforcement training is the best way to go with both breeds and training should start when they are puppies. Both are able to learn commands that are more advanced.

To curtail any negative behavior in the home, they will need quite a bit of engagement.

Of the two breeds, Goldendoodles tend to bark more because it's how they communicate to their owners.

Sheepadoodles are quieter by nature and won't usually bark when meeting someone new or meeting a new pet. Saying that, both breeds are considered to be less yappy than other breeds.

Both of these breeds are high-energy and rather large, so they need space to run and play, like a big backyard, for their daily exercise.

Since both the Goldendoodle and Sheepadoodle are bred from herding and hunting breeds, they need to be able to burn off extra energy and love to play.

Both breeds will need around an hour to an hour and a half of exercise each day. This can be broken down into short walks. Exercise intensity depends on how old the dog is.

Both breeds also tend to get mellower as they age, however, they will still need daily exercise. If they don't get the exercise they need, they can become lethargic and overweight.

They may also develop negative behavior, such as biting and nipping, barking a lot, and having separation anxiety.

The Sheepadoodle's herding instincts can make them great pets around children and other pets. They enjoy being around children, playing with them, and showing a lot of affection and patience.

The same goes for the Goldendoodle, who is very sociable and doesn't like to be away from their family. They tend to prefer being indoors more. Both breeds are friendly and sociable around other pets.

While both breeds tend to be fairly healthy, there are some health issues that they are predisposed to:

There are really no specific dietary requirements for these two breeds, however, if you want to keep them active and healthy, dog food that has high-quality proteins as the main ingredient is best. You should avoid food that has a lot of filler such as corn or grain because they can become sensitive or allergic to those ingredients.

For puppies, feed them small food portions three to four times per day. Young adults should be fed larger portions one to two times a day. Due to their larger size, Sheepadoodles require larger portions of food than the Goldendoodle does.

Is a Sheepadoodle Better than a Goldendoodle?

A post shared by B I L L I E (@billie_thesheepie)

Both of these breeds make great pets for the family, are good around children and other pets, and are very sociable around new people. You do need to bear in mind that they are a long-term financial investment and they need a lot of time and attention.

One key thing to consider is the size. Sheepadoodles are larger dogs and are not suited to apartment living. They do better in larger homes that have space for them to run.

The Sheepadoodle is a good fit for outside activities, such as camping, cycling, running, and hiking. They are a good choice for first-time dog owners and fit in well with active families, as well as being a great companion for a single individual.

Goldendoodles make great service dogs, especially therapy dogs due to their affectionate nature. They are great as family pets and their love of being around their family members means they like being indoors, so can be a good choice if you live in an apartment.

They can get bored easily though, with some having separation anxiety, so they probably wouldn't make a great choice for for homes where the dog will be left alone for many hours a day.